Mexico Ruins in Mexico: A Complete Guide to the Mayan Ruins

Are you planning a trip to Mexico? In that case, you’ve probably encountered the Mayan ruins while searching for the best attractions. However, with over 200 sites to see, you might be wondering which ruins offer the finest views and have the best nearby attractions.

The truth is that Mexico is teeming with activity, and with modern cities, the beaches of the Caribbean Sea, and alluring architecture, you’ll be spoiled for choice! It also has a rich history you can take in when you travel to these archaeological sites. 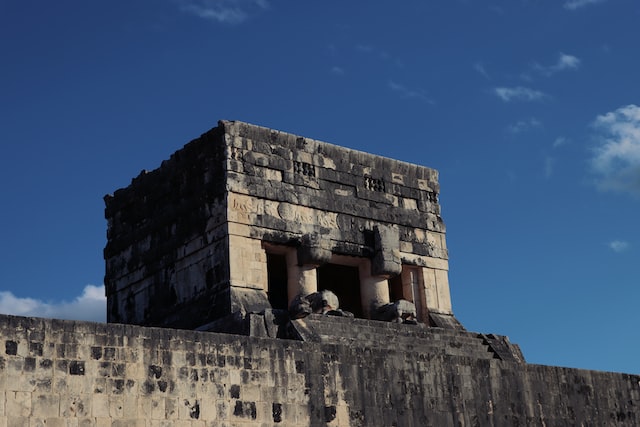 We have composed this travel guide to ensure you see some of the most compelling Mayan ruins in Mexico.

As a new Wonder of the World, there’s no way you should visit Mexico without paying this place a visit. Because of its central location in the Yucatan, numerous Chichen Itza tours are available to the public, whether you’re vacationing in Merida, Playa del Carmen, Tulum Cancun, or Riviera Maya.

Chichen Itza is the location in Mexico’s Yucatan Peninsula that is nearest to Valladolid Pueblo Magico, a magic town in Mexico like San Miguel de Allende. Keep in mind that a magic town is one that is famous for its great symbolism, history, and legends. It’s a great idea to spend a night or two at a Valladolid hotel or to visit neighboring Cenote Ik Kil while visiting the Mayan Ruins of Chichen Itza.

A guided tour is the most commonly used way to experience the Chichen Itza Mayan Ruins in Mexico. Chichen Itza is one of the most important Mayan sites, so it’s worth paying for a guide to understand why it’s so famous.

You may hire a tour guide there if you’re not already doing a group tour. Moreover, you’ll find authorized local guides offering day trips at the Chichen Itza entrance for roughly 1,000 pesos, which is about $50.

There are various Mayan pyramids and interesting attractions at Chichen Itza. Plan on spending a minimum of three hours exploring the entire site because it is fairly big.

El Castillo, which is also known as the Temple of Kukulcan, is the Chichen Itza pyramid you’ve probably seen in pictures. It will likely be the first thing you’ll encounter when you reach the site.

The Group of a Thousand Columns, the Great Ball Court, the Temple of the Warriors, and the Sacred Cenote (a region known for human sacrifices) are other noteworthy locations to see in Chichen Itza, Mexico.

Related Read: Can I Travel to Mexico Using a Natvisa?

The Mayan Ruins in Coba, Mexico, which can be found deep within a thick jungle, provide a different experience than other sites.

Moreover, the Coba Mayan Ruins in Mexico, which is more like a Mayan city than a pyramid tourist attraction, is often toured by bicycle or tricycle. There are various separate regions or buildings at the Coba Mayan Ruins. You may find pyramids, steles (large stone tablets), and other structures while learning about the rich history of the Maya.

Nohoch Mul (also known as Ixmoja), the largest pyramid of the Coba Mayan Ruins in Mexico, is one of the tallest pyramids in the Yucatan Peninsula. Because it is 137 feet tall, it takes 120 steps to get to the top.

Although there is a rope to hang onto, the climb is somewhat steep, which you’ll need to keep in mind. However, the magnificent view of the jungle you get from the top makes the trip worthwhile.

Tulum is a beautiful beach community in Mexico. Due to its bohemian atmosphere, vibrant cafés, upscale beach resorts, stunning Tulum cenotes, and of course, its Mayan ruins, the region is regarded as one of the most Instagrammable Mayan ruins in Mexico and is situated one and a half hours south of Cancun.

Only 5 to 10 minutes from the center of Tulum, on the north end of the sea, is the city’s Archeological Zone, which is often known as Tulum Ruins. This is arguably the basic way to see Mayan ruins in Mexico, as it is situated in Tulum National Park.

Moreover, the most popular feature of the Tulum Mayan Ruins, the Templo del Viento, also known as the Wind Temple, is inside.

You can travel along the path to the other buildings from there. Moreover, you’ll get to see the Templo de Los Frescos (Temple of the Frescoes), Templo del Dios Descendente (Temple of the Descending God), and El Castillo (The Castle) and learn about the Maya and their history.

After exploring the Tulum Mayan Ruins within, you can descend the stairway to the gorgeous beach cove below the archaeological site to enjoy a ball game on the beach or take in the views.

Uxmal in Mexico, which is pronounced oosh-mahl and means “three times built,” is another well-known UNESCO-designated archaeological site that has been open to the public for years.

It is situated on the west side of the Yucatan Peninsula, which you can visit when visiting Mexico. The site can be found 50 miles south of the new, modern city of Merida.

These Mayan ruins were constructed in the Puuc style and built astronomically rather than geometrically.

The elaborate carvings at the Ek Balam in Mexico, which is 16 miles north of Valladolid, will excite architecture enthusiasts. These ruins, which translate to “the black jaguar,” are some of the best-surviving sites in the area.

Moreover, the facade of Ek Balam was not made of stone like those of other Mayan ruins but rather of limestone mortar and stucco. To get a great workout and take in some of the best scenery, travel around the site that is surrounded by the jungle and climb the 95-foot Acropolis pyramid.

You may plan a fantastic day trip by combining a tour of Ek Balam with the nearby Cenote Maya Park.

From pyramids to temple structures, there’s so much to explore in Mexico! If you’re looking for an adventure, be sure to tour the ruins in Coba, Ek Balam, Tulum, Uxmal, or Chichen Itza.

We hope you found this travel guide helpful!