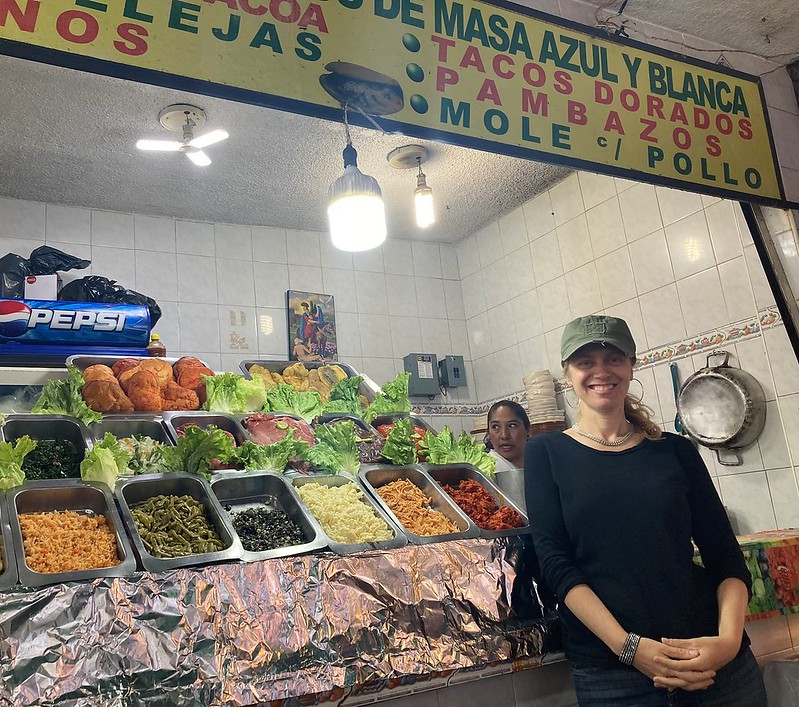 Today I’m going to talk about Mexican food. Yummy. I am not a foodie. There are so many things that I just don’t like. I don’t like spicy stuff. I don’t like onions and mushrooms. Plus, on top of that, I’m vegetarian. I will eat cheese here or there and eggs. But overall, I would say I’m definitely more plant-based. In Mexico, I don’t even think the idea of plant-based exists. Everything is meat and spicy. So, I started wondering, is Mexican food vegan friendly?

It is a rarity to find something that is not with meat and of course, a little spicy or Mexican will burn the mouth of anybody. For me, finding anything that is not spicy is a challenge itself. However, I still want to try a lot of the local foods, but I am quite limited because even though I want to try the local food, the majority of them are spicy. However, we travel this time to Queretaro, and the Pueblos Magicos, the magic villages that surround them.

They obviously have food that is only found in that place. More particular to that area. You can get them anywhere in Mexico, obviously. But especially in certain areas, you find certain foods are more pronounced than others in this area. I found several that were like extra. 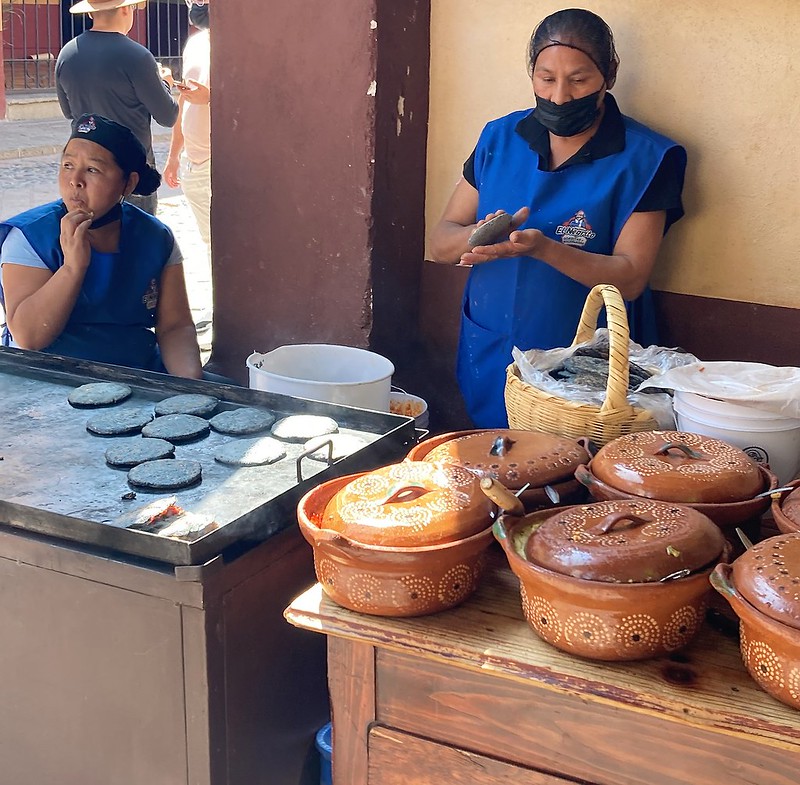 One of them is called gorditas. The actual definition of gorditas means a little fat one. Gorditas are tortillas that are usually deep-fried, and they are stuffed with all sorts of stuff, usually all meat-based. However, I did find a place and the cool thing is that you could see what they’re doing is that they do serve some things that are vegetarian and very few things that are actually vegan. You could put them like mushrooms, or they serve this Cactus.

It’s called nopal. It’s a Cactus that they cook in some way, and they use it a lot in that area. But I found one that is with pride is beans. And it was really tasty. Again, super deep-fried.

One thing about Mexican food, it is so fatty. It is just fatty, fatty. I honestly don’t think that there are very many things that are health-wise as far as keeping you trim, honestly. And I’m not being mean about it. It’s the reality.

The other thing that I found, which I was able to eat, is Tortas, they are sandwiches, and again, 99% of them all come with the meat of some sort, right? Like Chicharro. It’s all these different names that I never understood. However, I was able to find a place that you can make with just avocado, tomatoes, lettuce and beans, and whatever, like little veggie things.

And it was really yummy. So the coolest thing about eating these local dishes is that they’re cheap. They’re so cheap, you don’t have to go and spend tons of money on fancy restaurants. That is the beauty of it. And you can find these little tiny, little stamps. 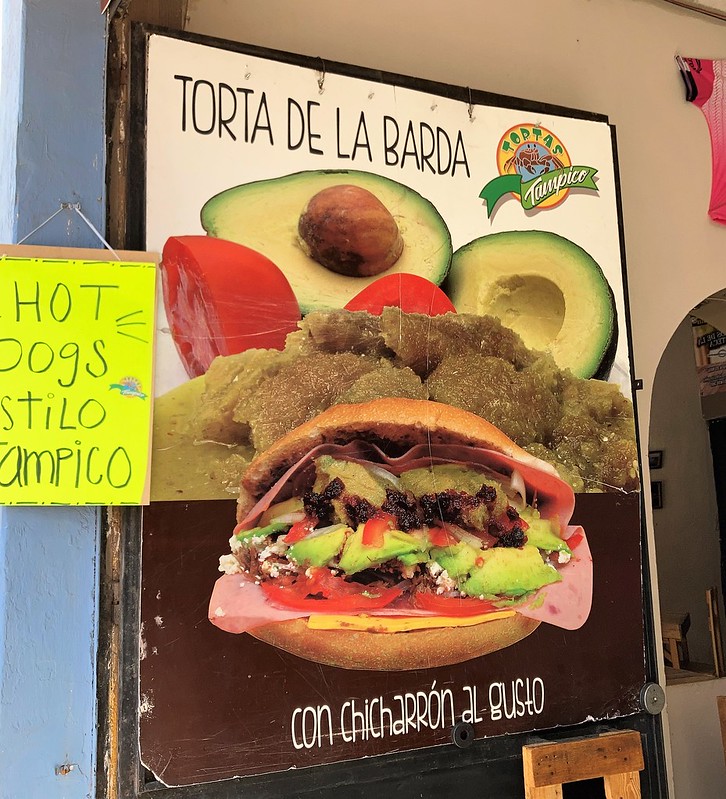 They don’t even have to be, like, the outdoor vendor foods, but little stands. And there are a bunch of food trucks. The other thing that I have found a lot was elote. Elote is corn. And what they do is they steam the corn.

Again, you could find these on the trees, and then they douse them. I mean, like, drown it with mayonnaise and this, I guess local hard cheese. And everything comes with chili, unless you specifically ask for it not to come like that. 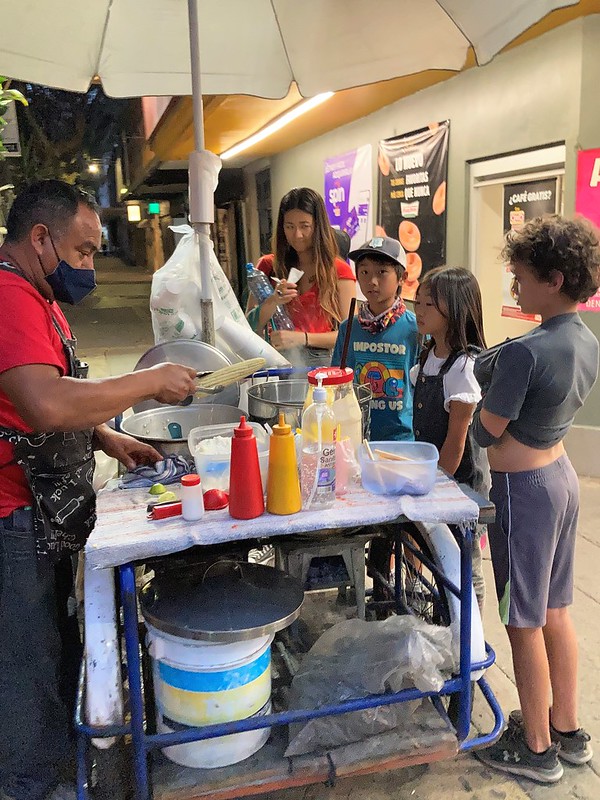 You could do quesadillas and usually, it’s stuffed with everything under the sun. The other thing that I really wanted to eat, so I love to go to places knowing little local things that I know that I can enjoy. 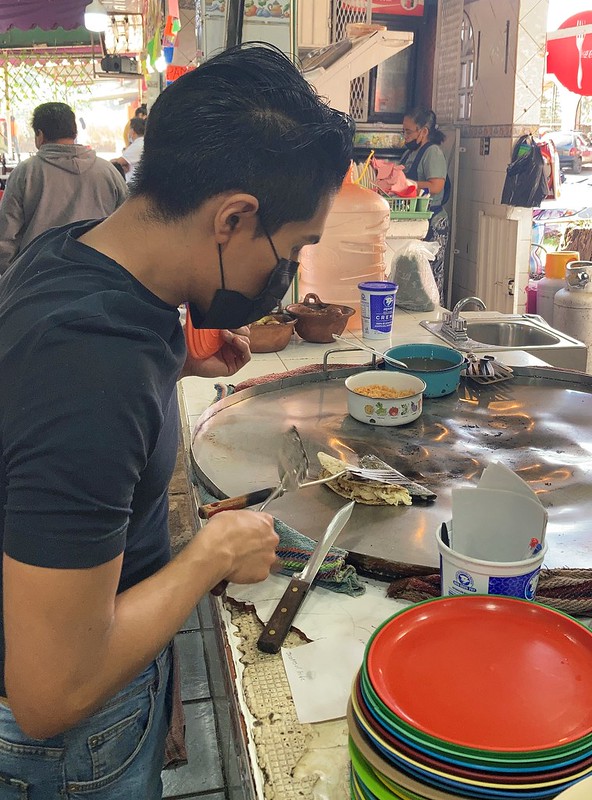 Also, there are tacos. Tacos, of course. I mean, Mexico is just known for tacos.

But vegan style, it’s just marinated in those specific flavors,  that was just unbelievable. That was probably the best. And the other thing that I really wanted, and I remembered from 20 years ago, was a typical Mexican breakfast that you find in the local Comedores.

The comedores is a little typical cafeteria. 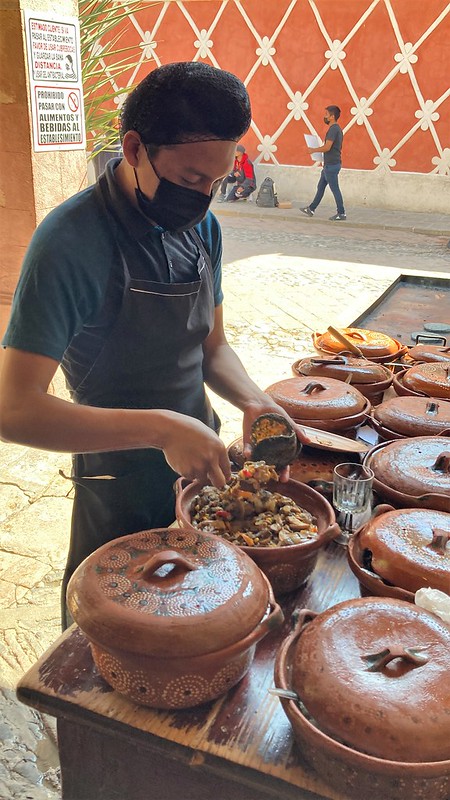 I wanted the beans, the eggs, and the cafe de Olla. Cafe de Olla is oh, my God, it’s so delicious. So what they do is they cook the coffee in, like, this pot with milk, and the coffee has this sweetness to it. So it’s already sweet.

It’s not sugar that they put in it. This kind of, it’s a natural sweet. Now, obviously, it comes from the sugar family and the coffee itself, and they Cook it with milk, which is usually evaporated milk. So that was something that I really wanted to taste.

And there are so many others that are like local Mexican. We’re talking less than a dollar or two. You could eat so well in Mexico. And obviously, my palate is very limited. But if you have a robust palate, you can truly enjoy everything you could possibly imagine with Mexican food.

So if you’re going to be planning to go to Mexico and look up the areas that you’re going to because each individual area has its specialty. If you go to the coast it’s got all these seafood specialties, if you go to another area it’s got other stuff, and then obviously there are the tacos and the tortillas and the nachos and those are all over but really do your homework like on the most basic typical ones and that is where the joy really comes in.