While visiting Guatape, Colombia I noticed that most of the restaurants really pushed and promoted Sancocho de Gallina Valluno. After plenty of walks around the Malecon and in the Central Plaza, I decided I had to have me some of this Traditional Colombian Food.

It is said that the sancocho originally came from the people of Canary Islands, a Spanish colony off the shores of Western Africa.

Why Sancocho de Gallina Valluno is a Typical Colombian Food?

Even though it originally started in the Canary Islands, Sancocho de gallina or Sancocho Valluno is now a traditional meal mainly from the Colombian Region El Valle. It is served mostly in the rural areas as the norm. And, of course, you can find it in restaurants all throughout Colombia’s major cities that specialize in Colombian food.

Traditionally this soup is made with hens, but you can use chicken too. I had the hen version.

The soup is a tasty broth with veggies, corn on the cob, and a big piece of the hen. 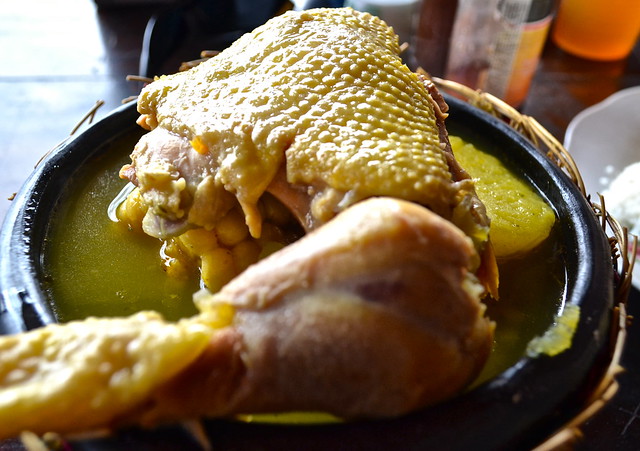 On the side, I was served rice, salad, avocado, and the most typical food of all Colombia – Arepa. 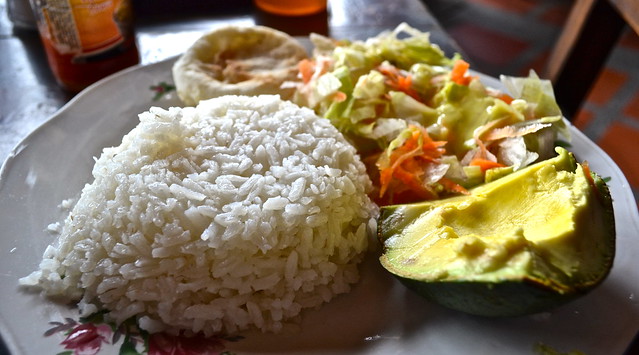 What I did was put the rice into the soup.

It was super filling, enough to hold me over past dinner. And quite tasty.

The whole dish cost me $6 including a drink.