Wildlife Guatemala – 8 Things You Should Know About Ocelots 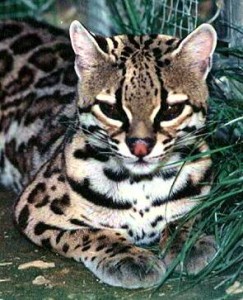 Many people confuses these cute felines with domestic cats. In Guatemala these guys can be found in the Tikal National Park. But before you take an Ocelot as a pet there are some things you should know about them:

1. The ocelot’s appearance is similar to a domestic cat. Its fur resembles a Clouded Leopard or Jaguar and was once regarded as particularly valuable.

Discover the top wildlife and big cat viewing in Guatemala.

2. These guys receive many names and some are: Painted Leopard, McKenney’s Wildcat, Jaguatirica (in Brazil), Jaguarete (in Paraguay and Argentina), Tigrillo (in Ecuador), Cunaguaro (in Venezuela), or Manigordo (in Costa Rica and Panama).

3. Ocelots hunt over a range of 18 km2, taking mostly small animals like deer, various rodents, reptiles and amphibians lizards, turtles, frogs, crab, birds and fish. Almost all of the prey that the ocelot hunts is far smaller than itself.

5. The ocelot is mostly nocturnal and very territorial. It will fight fiercely, sometimes to the death, in territorial disputes. In addition, the ocelot marks its territory with special urine. Like most felines, it is solitary, usually meeting only to mate.

6. During the day it rests in trees or other dense foliage, and will occasionally share its spot with another ocelot of the same sex.

7. Thousands of ocelots have been killed for their fur. The feline was classified a vulnerable species from 1972 until 1996, but gladly is now rated “least concern”.

8. It follows and finds prey via odor trails, but the ocelot also has very good vision, including night vision. The white rings around the ocelot’s eyes help to reflect extra light into the eye at night.