13 Facts About Turquoise-Browed Motmot in Guatemala

Most people, when they think of Guatemala Wildlife might think about Capuchin Monkeys, sea turtles, and Jaguars. But the country is home to many more species, including tons of colorful bird species.  One of them is the colorful turquoise-browed Motmot.

The turquoise-browed Motmot is a beautifully colored medium-sized bird that lives from the Yucatan Peninsula in Mexico down to Costa Rica. It is quite common in Central America. In fact, El Salvador and Nicaragua made it their national bird. In Guatemala, those birds can be seen in the departments of Alta Verapaz and Izabal. They are amazing for birding! 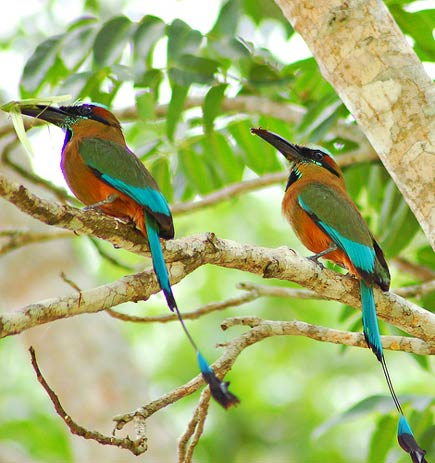 1. The Turquoise-Browed Motmot has many other names in different regions, in El Salvador it is called Torogoz and in Nicaragua, it is called Guardabarranco. In Guatemala, they are seen in the southern region.

2. When it comes to looks, the motmot has a mostly green body. There is a bright blue stripe above the eye and a blue-bordered black patch on the throat. The flight feathers and upper side of the tail are blue. Making it easy to identify.

3. Motmots are omnivorous. They love to eat small insects and reptiles but they have also been seen eating fruits. Some scholars also say that they have seen motmots eating poisonous frogs.

4. Don’t be fooled by the photos. Motmots might not be huge birds but they aren’t tiny either. Adults can measure approximately 34 cm long and weigh around 65 grams.

5. About the length of their lives, it is known that motmots live somewhere between 12 to 14 years. 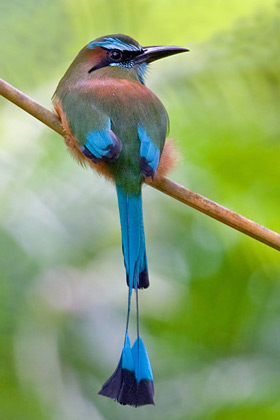 6. Studies have shown that motmots move their tail back and forth in a wag display when they detect predators, and that the display is likely to communicate that the motmot is aware of the predator and is prepared to escape.

7. After mating, a female motmot lays 3 – 6 white eggs in a long tunnel nest in an earth bank or sometimes in a quarry or fresh-water well.

8. Males apparently use their tail as a sexual signal, males with longer tails have the best pairing and reproductive success.

9. The population appears to be stable, hence the species does is not on the Vulnerable lists. But numbers are declining fast.

10. They aren’t that hard to find. You won’t have to do a lot of hiking to find them because they live in fairly open habitats such as forest edge, gallery forest, and scrub land.

11. Motmots don’t build the traditionally known nests made of twigs on trees. These birds dig burrows 0.6 to 2.5 m long that are 8 cm in diameter. These can be found next to roads or streams, quite exposed.

12. A fun behavior of this kind of motmot is that, while perched, they just stand there moving their tail’s ad if they were one of those old pendulum clocks.

13. This kind of motmot makes a distinctive noise. It is hard to describe, but it sounds similar to a  “wohh” or “owhh”. 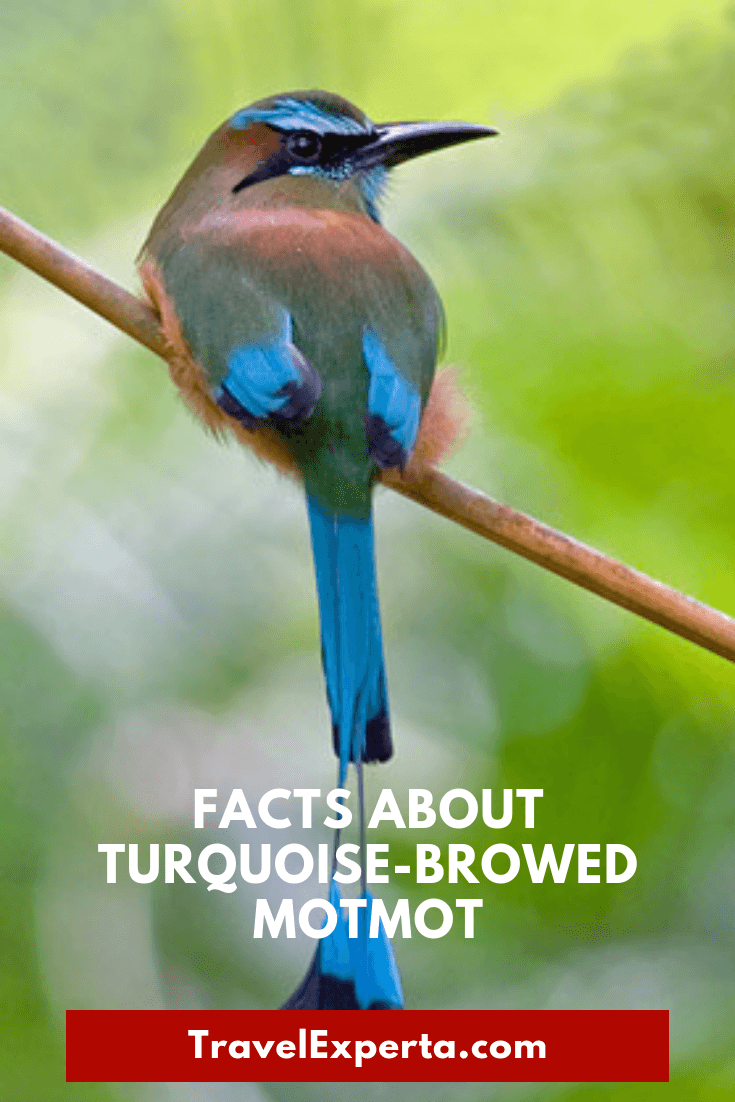