Brown basilisks are also called the Jesus lizard. They are native to Panama, Belize, northwestern Colombia and Costa Rica. In Guatemala, this species is widespread, found practically anywhere where there is a water source.

1. They usually appear in brown or olive brown with black stripes.

2. Basilisks are omnivorous, meaning they eat both plants and small animals. They feed mostly on insects but are reported to sometimes feed on fallen berries.

3. They have the nickname “Jesus Lizard” because when fleeing from a predator, they are very fast and can even run on top of the water.

4. Male Brown Basilisks can reach 80 cm in length and females are somewhat smaller.

5. This lizard is a quite arboreal reptile, and can be seen in bushes and the lower branches of trees, but also spends time on the ground. 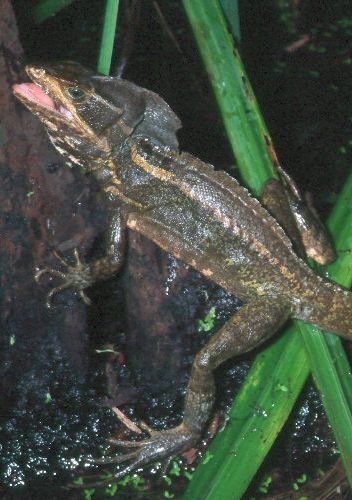 6. They are diurnal. At night it can be found sleeping in vine-covered thickets or in the open on low bushes. Basilisks are capable of climbing, running, and swimming, all with equal facility.

7. The average lifespan for a well kept basilisk can be 7-8 years.

8. They are not endangered but since people have been invading tropical areas, they are commonly seen in houses placed in areas that have the right climate. They are also very popular as pets.

9. Females lay 3 to 12 eggs from May to August in a secluded moisture retaining nesting site, usually a hole. The young hatch during the early part of the rainy season from June to September in about 55 to 65 days.

10. This species can be found in tropical and subtropical wet, moist, and dry forest habitats.

3 thoughts on “Wildlife Guatemala – 10 Facts About the Brown Basilisk”