Where to Go Rock Climbing In Utah (and Bouldering)

Where to Go Rock Climbing and Bouldering In Utah 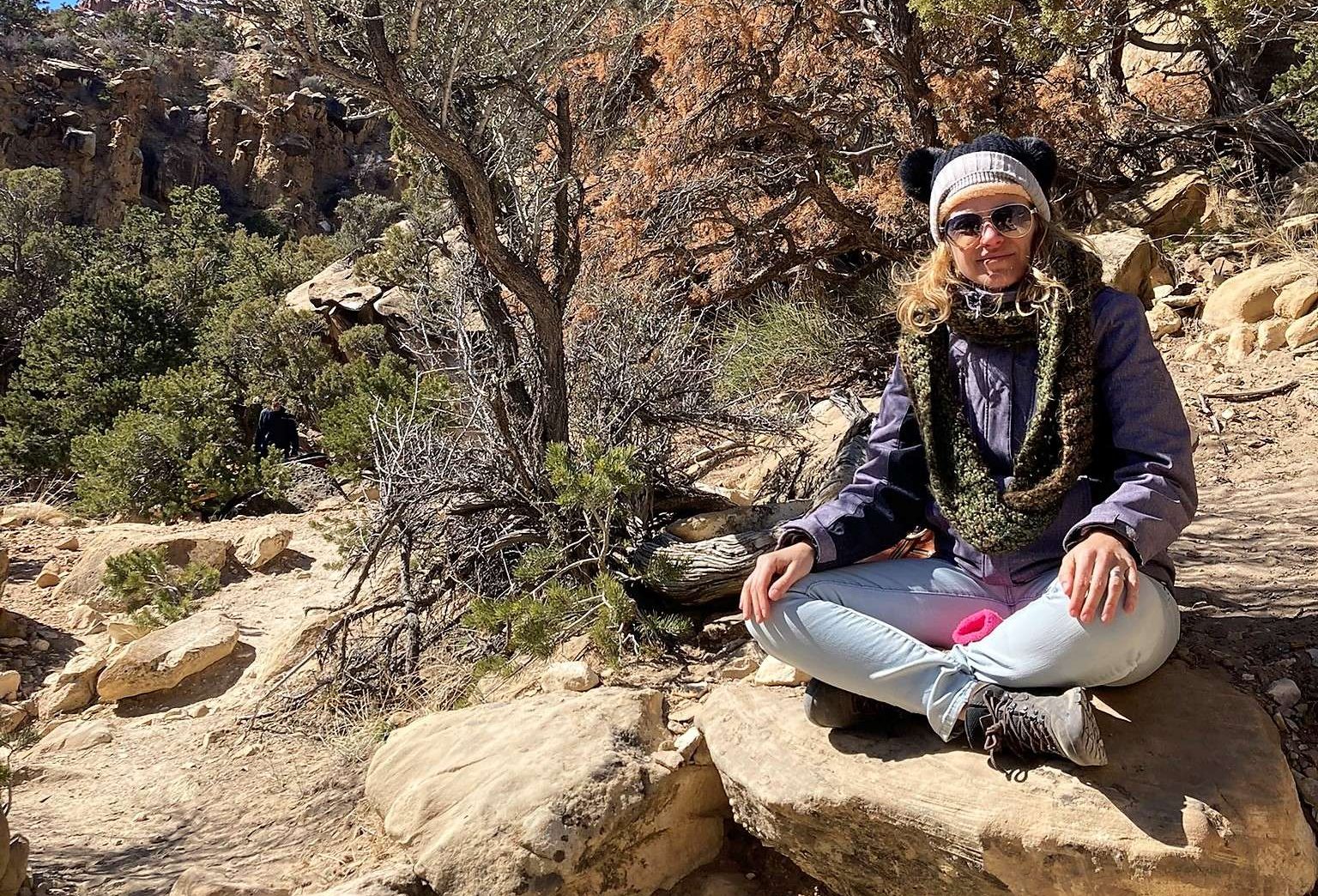 Utah interestingly enough is considered to be one of the most popular places in the world for bouldering. Who would have known? My kids have been talking about Utah, especially Salt Lake City for a long time, mainly because the USA climbing team and their main headquarters training center are located right in Salt Lake City. Today we’re going to be talking about rock climbing in Utah.

And because of that, there is an amazing amount of climbing gyms as well. I actually have an entire podcast on the front, which is a really popular climbing gym. Because of that, a lot of the best climbers in the U. S. And even internationally have moved or have made their home in Salt Lake City.

💡 You can listen to the full Front Climbing Gym podcast here

It’s always great to see other climbers too, you know, to go and intermingle with perfect high-level climbers, which is exactly what my kids are aspiring to do. However, it’s also really well known for bouldering, like actual outdoor climbing and one of the most famous places is called Joe’s Valley.

Joe’s Valley is about 3 hours away from Salt Lake City. It is literally in the middle of absolutely nowhere. I mean nowhere. This is a fascinating, beautiful place, but there’s nothing, we ended up getting an Airbnb, and it was in this teensy tiny little town if you put all these teeny tiny little ghost towns that are close to Joe’s Valley, I mean they are people do live there, but it feels like they’re just these ghost towns altogether. You probably wouldn’t even have enough of a population to open up a walmart. That’s what makes it even more phenomenally interesting to me that this place, Joe’s Valley, is considered to be one of the most famous places in the world for bouldering. 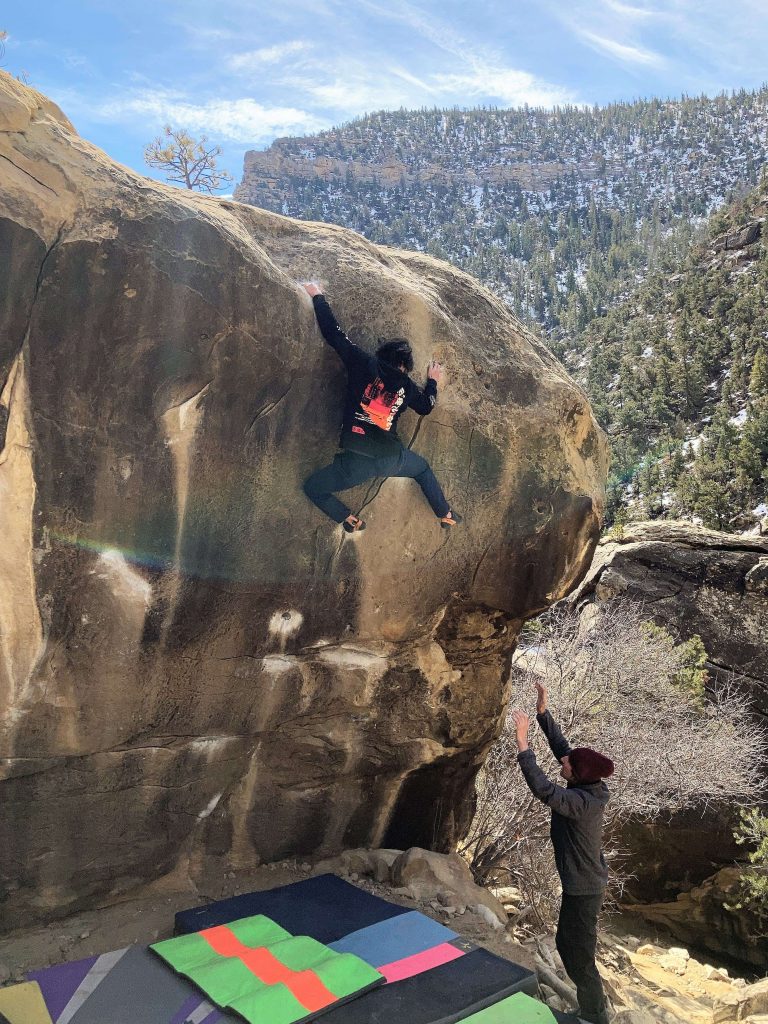 The way you get there first and foremost, we were traveling internationally, and we did not have crash pads, You cannot go climbing without crash pads. So I found a really cool place, It’s called Cup of Joe’s. It is obviously a coffee shop that also rents crash pads. So you do need to reserve in advance because they only have a certain amount to offer you. Although when we were there I have to admit the majority of the people were from the US and within a car driving distance. So they were bringing in their own crash pads, but we were not there during the high season. We came at the end of March, which was right at the beginning of the high season, so you can still see a bit of snow on the ground, but the weather was beautiful, it got a little chilly, especially in the shade, but overall it was fantastic.

Joe’s Valley is literally this area where it looked like there was this, imagine a popcorn kettle, and all this popcorn just kind of popped out and that’s what all these boulders are all over the place. They’re just like thousands of different boulders all over the place. And for some reason, this place was discovered to be one of the most famous bouldering places and when you actually go there and check it out, you do see that this was, you know, the bouldering projects are fantastic. However, it’s not that easy to find because you do need a car, you cannot do it without a car. I don’t even recommend hitchhiking, There’s hardly any traffic at all. So you need to get to route 29 is the main route where all this happens. 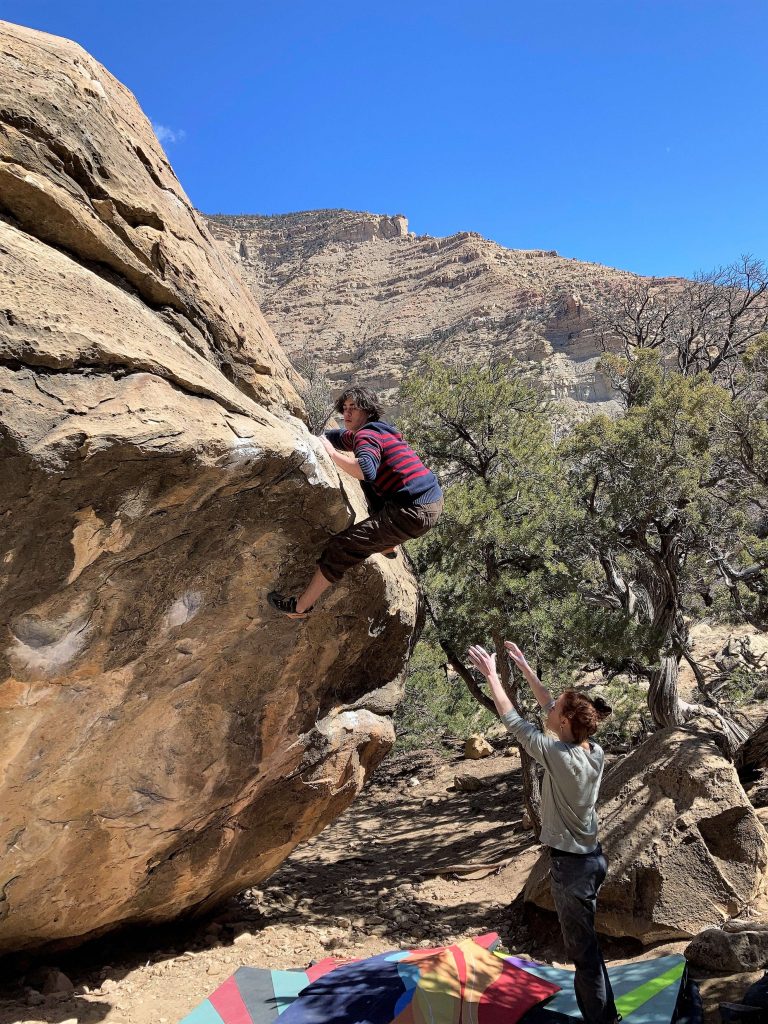 You can take route 29 there are three spots in Joe’s Valley that you could go to and if you follow along 29 you will eventually see the places where to boulder. You also need to get a guidebook. At Cup of Joe’s, the owner could give you a free guide right and airdrop it to your phone.

So there are several places that you can go. The first one is right to almost the reservoir and you literally, it’s all along the road, and you have your guide, or you start to see a bunch of people doing different projects and by the time you get there you will know what you want to do and what not because of your level. You cannot do some of those projects. There are V 16, but they also have a lot of that V zeroes and everything in between. So you definitely need to know what your level is and what you want to attempt to do.

Then there is another place where you can make a right turn if you’re coming from the main town of Orangeville and that’s also another area for climbers to boulder. Again, you’ll take the road, there are only 2 roads. It’s not like there’s a bunch, you’ll see it, you’ll see the fork, you just drive, park your car along the road, you see other people, you know where it is. It’s not that difficult to find what you want, and you could spend days there, especially if you are bouldering, you know what projects you’re doing, there’s a lot of opportunity for camping. A lot of people were in camper vans. 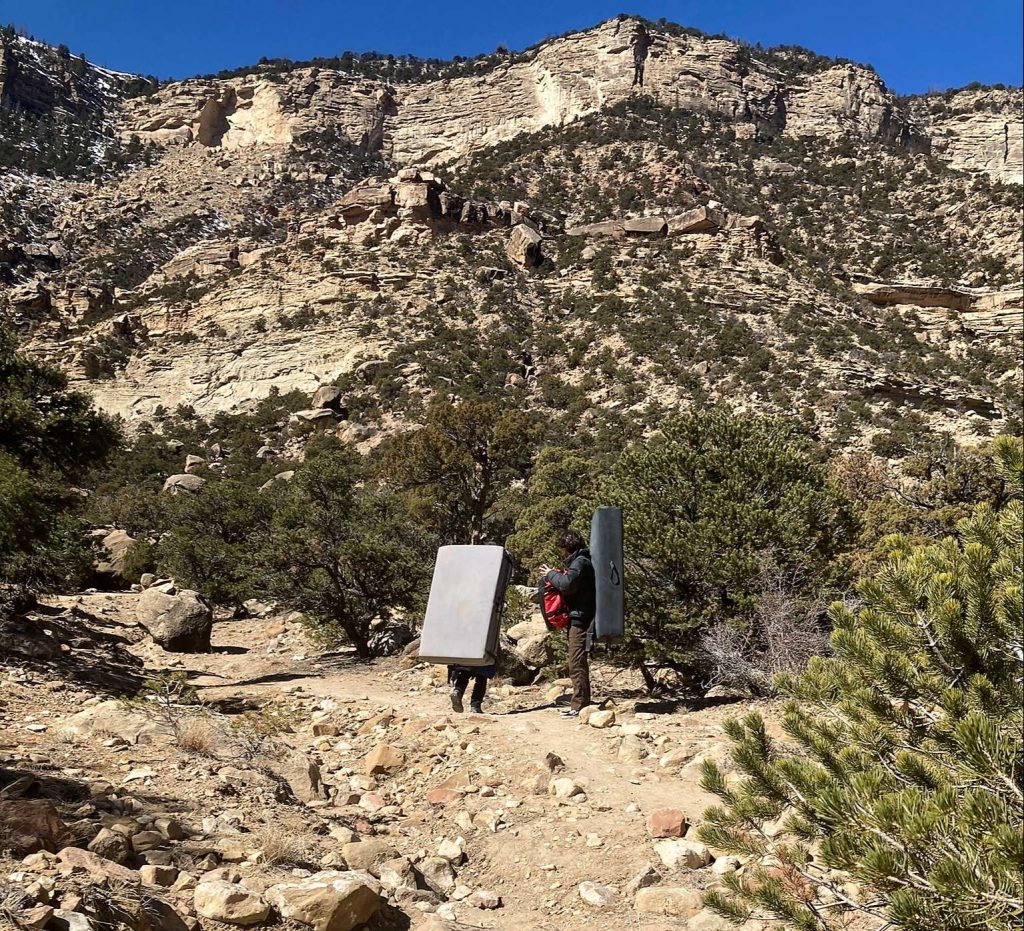 The most beautiful part about climbing and if you don’t know much about the climbing community, it is still a very supportive community. You know, there is no territorialism like there is in surfing, so everybody is really helpful and friendly, they’re just hanging out helping one another and doing projects together. It’s a really amazing experience even if you don’t climb like I don’t climb. I just went there taking my sons and also obviously to help spot them, but I really didn’t even need to do the spotting. There were so many other people that were helping one another and hanging out, and if you don’t have that many crash pads, it’s totally fine. There’s going to be a lot of people there that you could, you could just share your crash pads.

And what really impressed me a lot, as well as there, were a lot of solo women who were camping and climbing, and it just showed that it’s still really safe. It was a super safe, very supportive environment and it was so fun. So this is one of the most popular places by far to go bouldering.

Now, if you’re staying in Salt Lake City, another really popular place to go to. It’s called Little Cottonwood Canyon and again, Amazing bouldering is very different from Joe’s valley. But it’s 20 minutes outside of Salt Lake City. I again really recommend having a car, definitely renting a car. Car rentals in the States are not expensive. There are different places, you do need to do your homework, and different gyms that rent crash pads. We rented some crash pads. So we were ready.

The cool thing about Little Cottonwood Canyon is that you can literally park, and the boulder is right there, and there are quite a lot of boulders. It’s a little different from Joe’s Valley, and that’s what I really recommend doing with Joe’s Valley. You could get a guide. 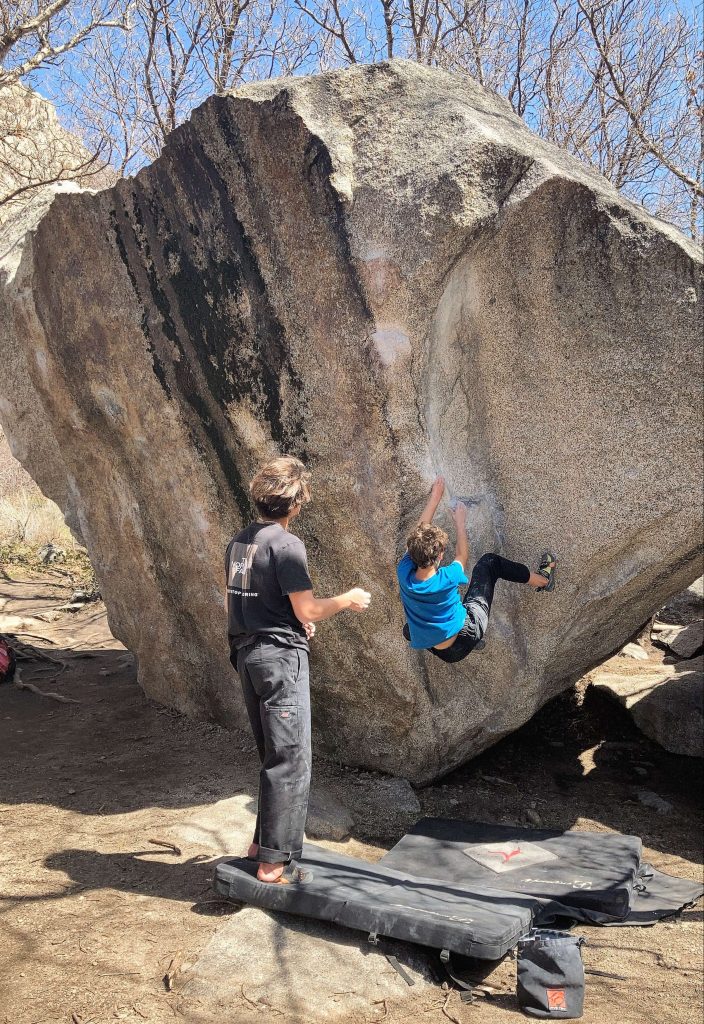 But with little Cottonwood Canyon, there’s actually an app. There are two apps that you can use. It’s literally called LCC bouldering. One of them is free. They just give you kind of like a little taste, and then you could buy, it’s, you know, the guidebook is via the app, which is very, very convenient, and I recommend that It’s only like $12 or something. So this way you could just do either of the apps, and it will show you exactly everything that you need to do at the different levels and whatnot. 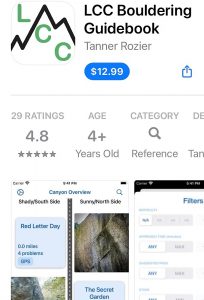 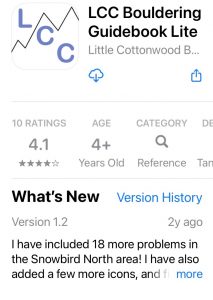 And again, there is this community, I found that the community to be a lot more active and probably just bigger, but maybe we just came at a different time for little cottonwood. There were a lot fewer people in little Cottonwood Canyon versus Joe’s Canyon.

Little Cottonwood Canyon to me looked more like where the locals from Salt Lake City visit, simply because we were there during the weekday, and it was still school. So maybe that’s why there were a lot fewer people. But Joe’s Valley is where people, it’s an actual destination. Again, we’re talking about really rough destinations, like camping, you know, dirtbag type of destination. 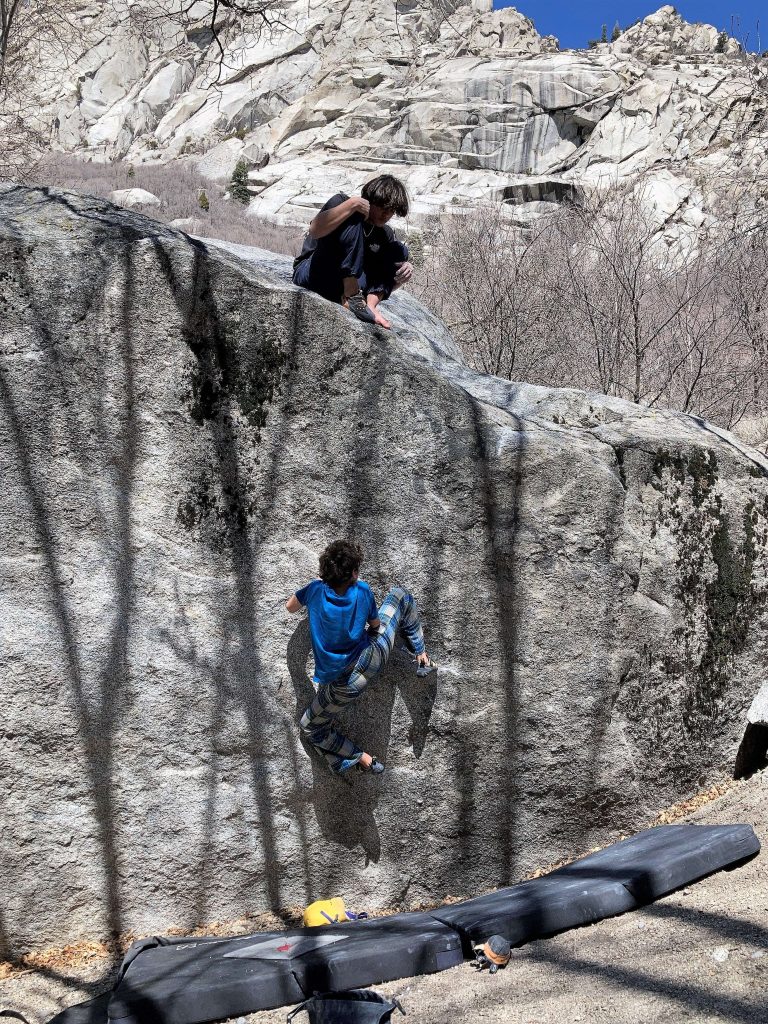 There are definitely some Airbnb’s, but during the busy season, they get booked out. So if you are going to go for Airbnb, make your reservations beforehand, don’t just show up expecting that you’ll find something or look for it a couple of days before.

Honestly, everything is within 3 hours and if you are into bouldering, and you get to go to Utah’s first amazing state, becoming one of my top favorite states in the United States. So Joe’s Valley is definitely a great place for you to check out. And obviously, a little Cottonwood Canyon because especially if you’re staying right there in Salt Lake City, and they have an amazing amount of options for the gyms, and different climbing gyms as well. 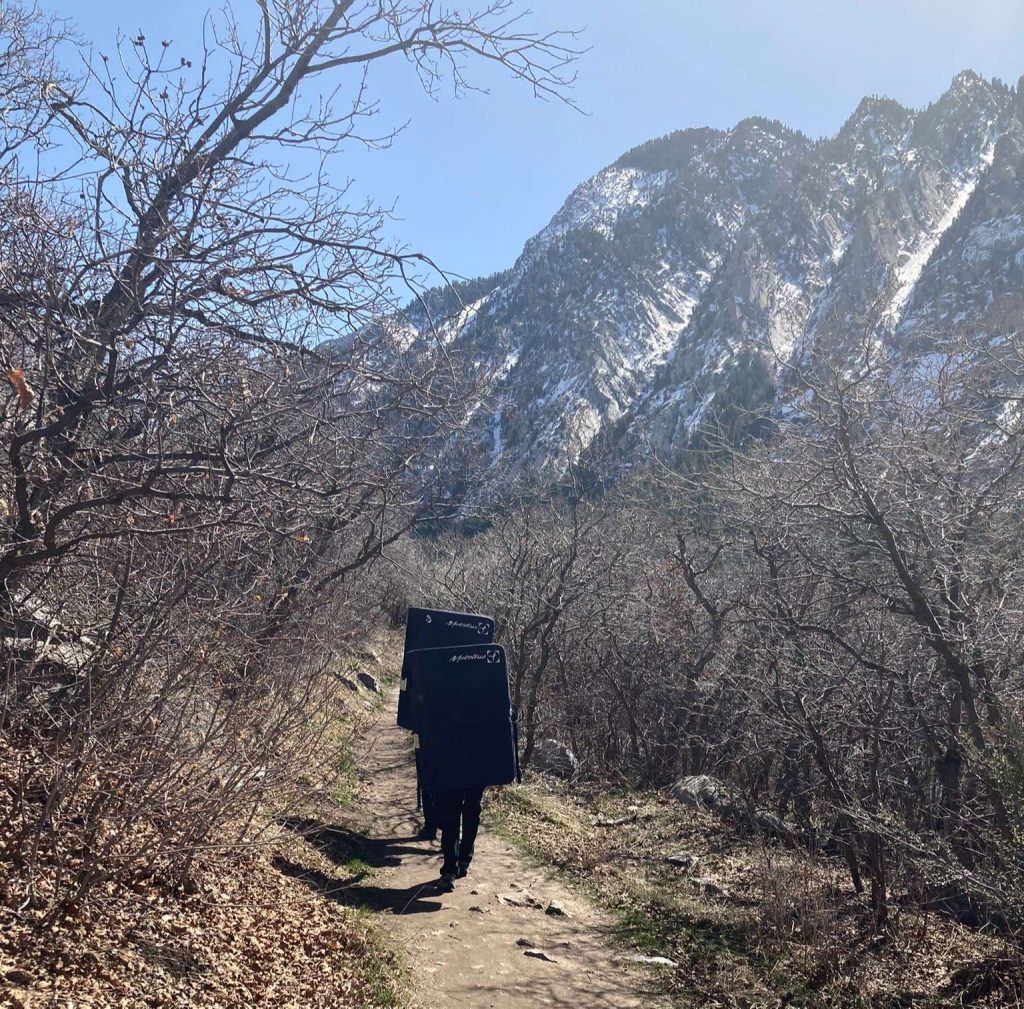