Where to eat in Cuba while on vacation? That’s a good question, since they have such a wide variety of choices, other than the obvious places you normally visit. There is so much more than just restaurants in Havana. Don’t miss this when traveling to Havana Cuba!

What makes eating out in Cuba so different and Unique:

1. Paladars In Havana Cuba- What are Paladars?

The wave of privately owned restaurants has swept over the island as have Casa Particulars. Back in the 1990’s when Cuba fell on its hardest time (The Special Period in Time of Peace), Fidel and his administration permitted private homes to open their doors and have parts of their house transformed into restaurants. This may sound like you would be walking into a private home, but you’ll be so surprised. Most of them are enormous, intricately decorated, and outperform in decor and cuisine some top-rated world-known restaurants. Of course, you never know what you’ll be stepping into, but chances are the food will be unique, home-cooked, and fresh. While in Havana Cuba I had the opportunity to visit quite a few. The one that impressed me the most was the world-famous – La Guarida. Not so much for the food, which was interesting! But because of its location.  The restaurant itself is on the top floor of a dilapidated, but oh-so-elegant grandiose home with a staircase made up of 100% marble with halls that once would have rivaled Palace of Versailles and 40 foot ceilings with balconies overlooking the city. Walking up the stairs it’s hard not to imagine what Cuba was like during it’s capitalistic heyday during Batista’s reign and other fore-presidents who thought of riches rather than the people. Today the building is split up into tons of apartments with one family owning La Guarida Paladar.

What’s the difference between a Paladar and a restaurant? It’s actually quite easy. Restaurants are owned 100% by the State while Paladars have to pay 51% of their earnings to the State. You can find all sorts of restaurants, specializing in all sorts of cuisines – the same as with Paladars (although Paladars mainly focus on Cuban food). So what’s the REAL DIFFERENCE? Money! Really, that’s it. It’s cheaper to eat at Restaurants than in Paladars, since the families only get to see 49% they charge more for the meal!

I delightful pleasure and one that we have long forgotten and lost over generations of importation of food. Cuba still lives on what’s in season. We were visiting Cuba right after the orange season, and you couldn’t find fresh-squeezed orange juice anywhere! This was one of the many fruits and vegetables that were either in or out at the moment.

Fun Fact About Cuba: As with many things in Cuba, you quickly get over it and realize you can totally live with it!

If you don’t eat a Cuban Sandwich or enjoy a pizza from an outdoor stand you really haven’t tasted the real Cuba! First, you can feed a whole family for less than $10, including a drink and dessert.  They are located all over the main areas of Havana. My favorite by far was in Havana Vieja. TIP: It’s easier if you have Moneda Nacional on you (Cuban Peso) and more fun.

5. The ‘One Cuc’ Restaurants

How can you resist a full meal for around two bucks? These restaurants are not very noticeable at first sight. But once you get the lay of the land and feel a bit more comfortable, you’ll find these amazing restaurants everywhere. They are the ones that have menus saying 40 pesos for a full meal. No, it’s not $40 but 40 Cuban Pesos also known as Moneda Nacional.

The conversion rate is 24 Cuban Pesos for one CUC (Convertible peso) which is equivalent to one US dollar. You can see big signs saying – OFERTAS EN MONEDA NACIONAL – which is another hint this is where you want to have a Cuban experience. Few countries in the world have such a wide and unique variety of eating out. So go for the local experience, Cuba traditional food is amazing! It’s usually a lot more fun than the typical touristic way. 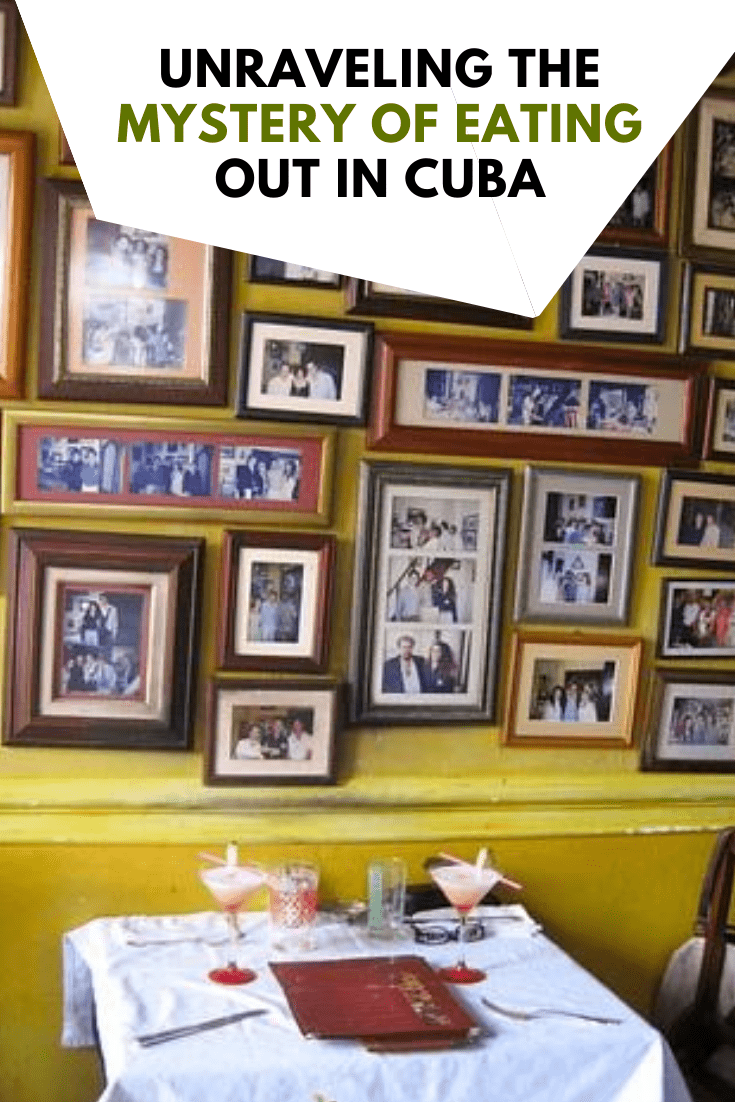