Guatemala is an amazing country to visit in Central America, not only to learn Spanish. Guatemala has a ton of places to visit and a huge amount of activities to do for travelers. The Guatemalan landscape is dominated by volcanoes, most of them remain dormant but many are active too. Some people like to climb or hike, while others just want to look at them from the distance. That’s why I decided to write a massive post about volcanoes in Guatemala. The top 10 most stunning and a lot more information.

Almost every tourist just heads directly to Guatemala City and that’s ok, but there are some amazing places to visit outside the capital. Antigua is really close, and it’s a beautiful colonial town. Antigua is surrounded by 4 volcanoes, Agua Volcano, Fuego Volcano, Pacaya Volcano and Acantenango Volcano. A great place for people looking for volcanoes in Guatemala! 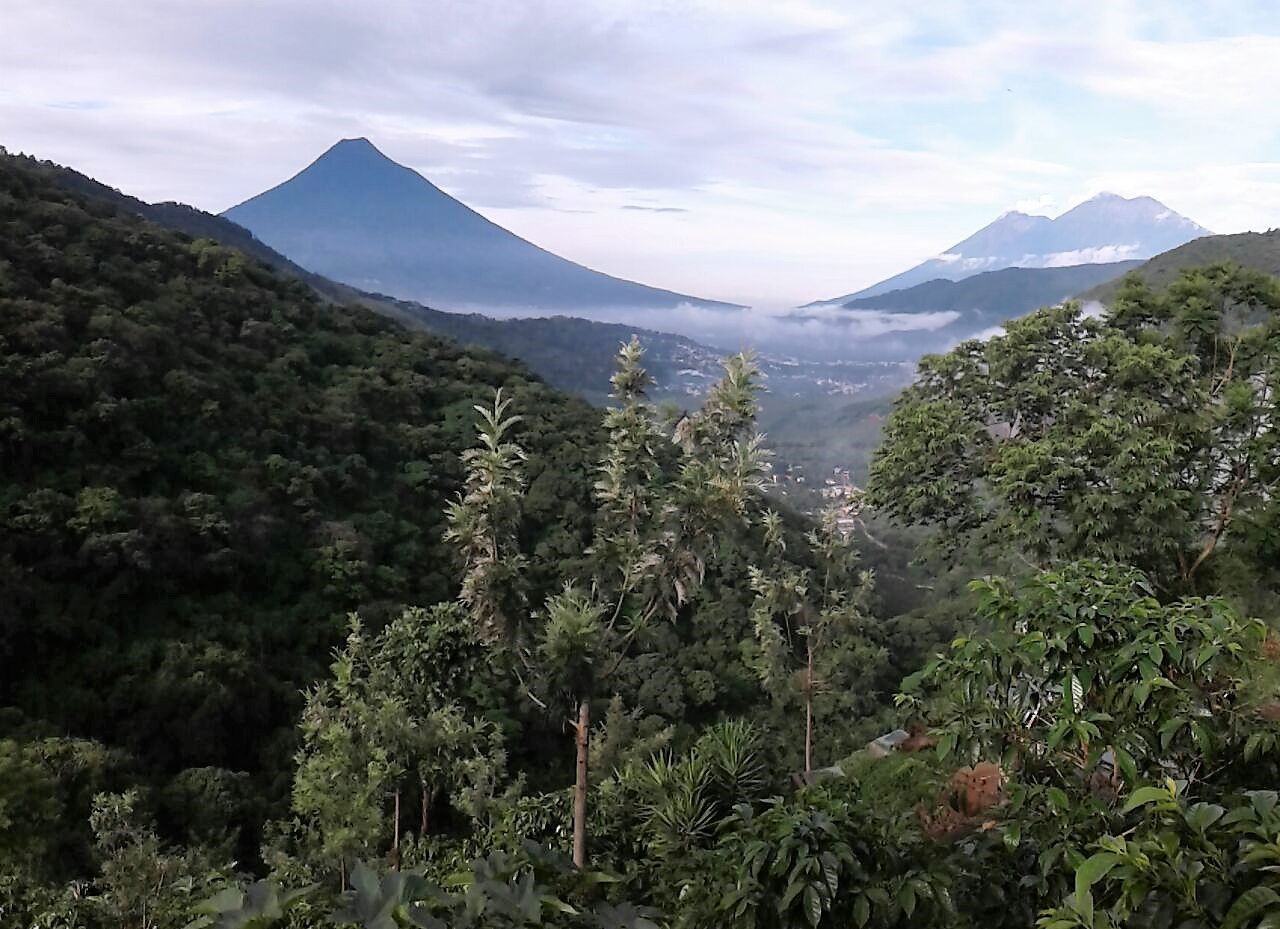 How many volcanoes are in Guatemala

There are about 37 volcanoes in Guatemala. Volcanoes are a common sight throughout Guatemala, so, you probably going to stumble upon one if you decide to visit the country. The Pacaya Volcano is the most popular and is located just outside of Guatemala City, the most famous tourist destination. Other notable volcanoes in Guatemala include Fuego Volcán, which translates to “Volcano of Fire”, and regularly emits ash clouds that can be seen from Chimaltenango, Escuintla and Sacatepéquez departments.

Even if you tried, you couldn’t avoid an encounter with a volcano in Guatemala. The majority of the most popular tourist destinations are surrounded by them. For example, the gorgeous colonial town of Antigua lies between Agua, Fuego and Acatenango volcanoes. Lago Amatitlan and the popular town of Panajachel have amazing views of Toliman, Atitlan, and San Pedro volcanoes. The reason for all these incredible volcanoes is the result of the subduction zone of the Cocos plate beneath the Caribbean plate.

How many active volcanoes in Guatemala

The volcanoes of Guatemala are a majestic sight, and will not disappoint even the most seasoned volcano explorer.. Out of the 37 volcanoes that you can find in the country, Guatemala is home to three of the most active volcanoes: Pacaya, Fuego, and Santiaguito volcano. Of these, Fuego Volcano is the most active and popular, with tourists often climbing to the top to get a glimpse of the smoking crater.

The most recent eruption was in 2018 when the Fuego volcano erupted and caused the death of many people and widespread evacuations. The Guatemalan National Institute of Volcanology is responsible for monitoring all of the volcanoes in Guatemala, (INSIVUMEH) and they have a very comprehensive website where you can find updates on all of the volcanoes, as well as information about each one.

10 Most Stunning Volcanoes in Guatemala

For centuries and ages, the volcanoes of Guatemala have been revered by the Maya people. They used to believe that the mountains were the homes of gods and goddesses who controlled every aspect of their daily life, like the weather, agriculture, and human destiny.

Today, these majestic mountains continue to captivate visitors from every corner of the world. Many have come to see the three iconic volcanoes that dominate the Guatemalan landscape: Agua, Fuego, and Acatenango. But there are far more than just those three, here are the 10 most stunning volcanoes of Guatemala: 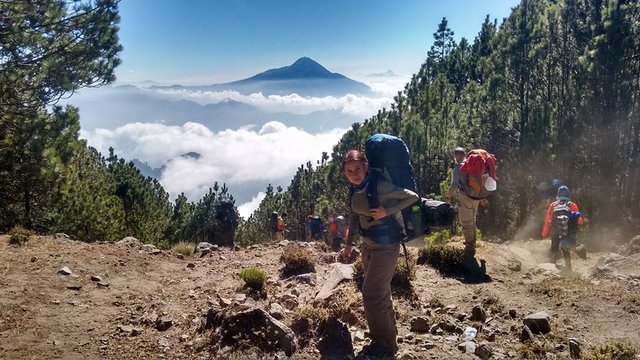 The highest peak in Guatemala is a large stratovolcano located in the department of San Marcos in western Guatemala. The peak has an elevation of 13,790 ft, making it the highest mountain in Central America. It has two summits, one of them is a huge crater of 50-70 meters, but don’t worry the last eruption was in 1863 and has remained dormant since then.

It’s a great tourist attraction in Guatemala, many nature lovers and tourists of all kinds visit Tajumulco volcano in order to get some adventure. The volcano is surrounded by some amazing villages you can explore, but the main activities are climbing, hiking and mountaineering, from the top, you can see both Guatemala and Mexico and if you’re lucky and the day is clear you can see the Pacific Ocean.

Probably one of the most hiked volcanos in Guatemala, due to its proximity to Antigua and the fact that it holds a rich ecosystem. It has an elevation of 13,045 ft and also has two peaks, Pico Mayor and Yepocapa. It’s also called the three sisters (Tres Hermanas) because Acatenango is joined with Volcán de Fuego.

Acatenango volcano last eruption was in 1972, and it’s considered a dormant volcano. Each year a huge amount of tourists head to acatenango to do some hiking, climbing, or mountaineering, also, you can do other activities like wildlife watching. One of the most popular activities is an overnight hiking tour, where an almost 9 miles out-and-back trail is waiting for you.

The Fuego Volcano in Guatemala has been increasingly active over the past several years, labeled as the most active volcano in the country. The volcano is located about 10 miles from Antigua and although it hasn’t caused any fatalities lately, it has forced evacuations and left thousands without homes or possessions.

Fuego volcano has an elevation of almost 3,800 m. It’s famous for being an active stratovolcano, active at low levels, meaning it erupts gas and hash every 15 min, but bigger eruptions are very rare. You actually can hike this volcano, but it’s considered a challenging route. 2.6 miles overnight hike starting near San Miguel Dueñas, Sacatepéquez. You should go on a volcano tour. Also, you should go to Sacatepez in November, since they will be celebrating the Day of The Dead, and Guatemala do it in a whole different way than Mexico. 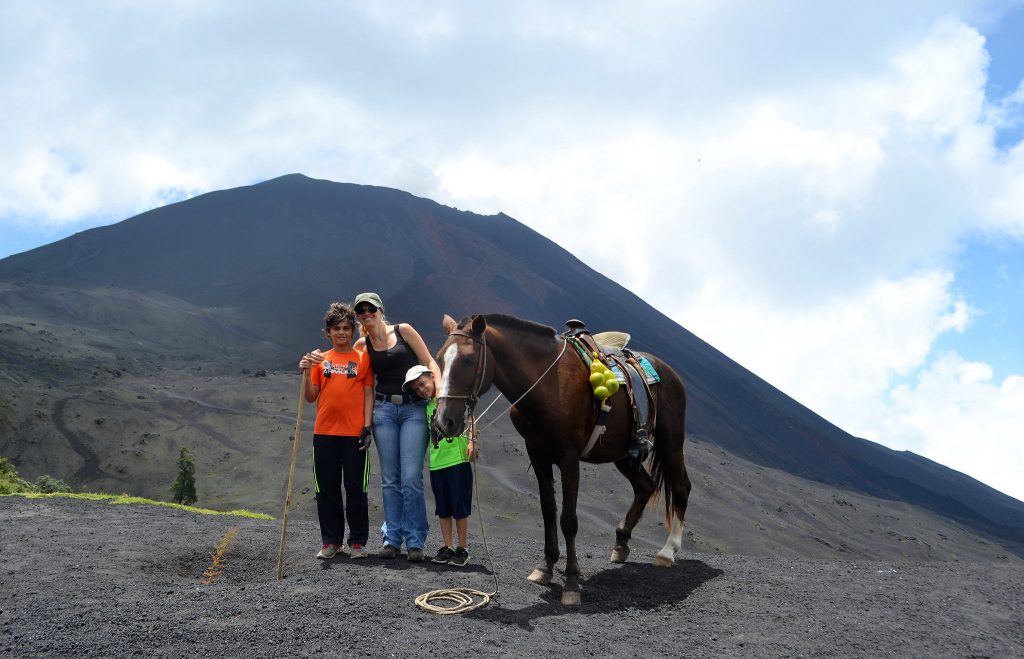 This volcano is probably one of the most famous volcanoes in Guatemala. Pacaya Volcano is an active volcano located in Guatemala City and rises to an altitude of 2,552 metres (8,346 ft). Pacaya has been erupting continuously since 1961. This volcano is an amazing tourist attraction, it’s home to the Guatemala Impact Marathon, a pioneer in the use of a running route across a lava field.

Even though it is one of the most active volcanoes in Central America, the villages nearby ignore the evacuation alerts made in 2021. Each year many tourists, nature lovers, and people looking for adventure head to the Pacaya Volcano to hike the 5km in and out the trail to the top, where you can spot lava and have tons of fun. You can even enjoy some freshly made pizza cooked on lava! 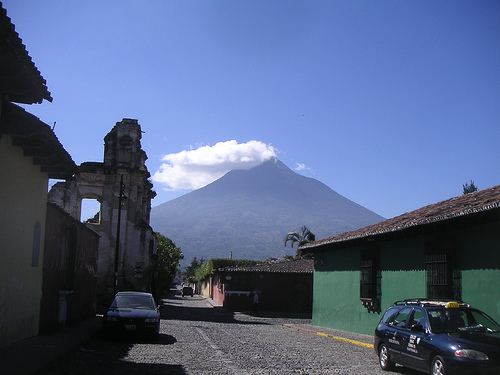 The Agua Volcano is a stratovolcano near the city of Antigua. At 3,500 meters above sea level, it is one of the highest mountains in the country. The volcano has been dormant for a long time now, making it a safe bet for many tourists looking to do some hiking, climbing, or camping near the volcano.

You can find tons of tours willing to take you there and offer you many outdoor activities great for nature lovers.

The Santa Maria Volcano, located near the city of Quetzaltenango, is an active stratovolcano with an elevation of 3,772 m. The volcano has a history of destructive eruptions, the most notable of which was in 1902, one of the largest volcanic eruptions of 20th century. The most volcanic activity takes place in Santiaguito volcano, which is close to Santa Marina

You hike to the top of Santa Maria Volcano, which is a great hike, considered a challenging route that can be done in a whole day.

The flores volcano, also known as Volcano Amayo is a dormant stratovolcano located near the city of Jutiapa. It has a height of 5,249ft. Probably not one of the most famous volcanos in the country but sure is a great attraction, It’s surrounded by amazing vegetation, and great for outdoor adventurers looking to do some outdoor activities like hiking or camping. You can find near the peak of the mountain some caves to take photos, among other great spots.

The Atitlan Volcano is a large, conical stratovolcano near the caldera of Lake Atitlan in the Guatemala Highlands. It has an elevation of 11598 ft above sea level and is located in the Solola department. It has been pretty active throughout history, but its last eruption was in 1853, quite a long time ago.

It’s a popular volcano since it’s near a top tourist attraction like Lake Atitlan, where you can find a huge variety of villages and tons of attractions and things to do. You can hike the Atitlan Volcano with a tour, the hike is a 16.5 km challenging route and takes about 7h to do it completely, but it’s awesome, the views from the peak are amazing.

In my opinion, this is one of the most beautiful volcanoes in Guatemala. The Ipala Volcano is a stratovolcano with an elevation of 5,413 ft, on the top the volcano has a summit of 1000 meters where you’ll find a stunning crater lake (lake Ipala).  The Ipala Volcano is located near Chiquimula city.

Each year many tourists made their way to the crater lake, an easy hike you can do in about 1h or 2h, also, you can rent a horse and do a horseback hike to the top!