7 of the Top Things to Do in Nicaragua – Central America 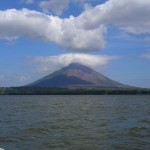 7 of the Top Things to Do in Nicaragua – Central America

Compared to Granada, Leon is less traveled, more liberal and smaller. In Leon you will find a family-friendly, easy going atmosphere that is very popular with independent travelers and backpackers. Your first day can be spent just wandering around the city square, visiting Recoleccion Cathedral (there is a rooftop tour that you can sign up for), in addition to the sidewalk cafes, street markets and baroque theater. Enjoy a mojito that is made with the incredible, local Flor de Cana rum either at Via Via or across the street at Bigfoot Hostel, then hangout and enjoy live music along with your drink.

If don’t think that volcano boarding would be fun, then I’m not sure what to tell you. My boyfriend and I went on this adventure, along with two other Americans who were visiting Leon and our Va Pues Tours guide. Cerro Negrol is just 161 years old, which makes it a very young volcano and one of the more active ones as well. It has erupted a total of 23 times in its young life – with the last one taking place in 1999. Therefore, it is definitely overdue for a big steam and hot lava explosion.

After a moderately difficult hour-long climb, you will make to the top. You can board down the other side of the volcano on a stand-up board (which is very similar to a snowboard). Or you can do what I did and sit down like you would on a sled. You don’t go as fast as you may think, since the boards do get bogged down really easily due to the volcanic gravel. However, it is adrenaline-pumping, dirty, unusual and great fun.

3. Explore The Architecture Of Granada

Granada, as Central America’s oldest city at its original site, is a colorful and fascinating city that is full of intriguing colonial-era treasures. Throughout the centuries, much of the city has been built and then rebuilt, as various colonists and marauders sacked the city. Granada definitely demands to be explored, ranging from 17th-century museums and churches to its hidden courtyards and boutique hotels that have been converted from historic buildings.

Some of the major town center highlights include the main square’s grand cathedral; the Iglesia de La Merced tower, from where you can snap iconic photos of Granada’s skyline; Antiquo Convento San Francisco, which has been converted into a museum housing an incredible pre-Columbian collection; and of course the colorful streets, with every block full of architectural surprises. The Fortaleza de la Polvora is a small medieval fort located right outside of central Granada. There is also a cemetery nearby, which is very interesting to explore and wander through, providing you will an almost limitless amount of photo opportunities. If you’re interested in this tour companies such as toursnicaragua.com can help organize it.

Nica food goes beyond simply gallo pinto, a common dish of beans and rice that is very popular in a majority of Latin American countries and seems to be on every plate. Nacatamal is my favorite dish. This moist tamale is filled with veggies, chicken, pork or other fillings and then cooked wrapped up in a banana leaf. Another delicious but cheap meal is “fritanga,” which is local food that a sidewalk vendor serves. All the food is on display, so you can choose whatever you want to eat. There is always gallo pinto available along with soft-sauteed and fried plantains, in addition to several fish or meat dishes. Usually it comes wrapped up inside a banana leaf and then placed in a plastic bag. Typically a complete three to four dish meal will only cost you around $1.50.

5. Shop in the Nica Markets

The markets here, like in so many other Latin American countries, are the center of daily life here. In cities such as Granada and Leon, the very heart of them are the main squares, with very active handicraft and food stalls. Spend a morning in Granada walking through Mercado Municipal, which is mainly a food market which is very colorful and lively, and a couple of vendors selling jewelry or crafts.

About an hour away in Masaya, there are two very worthwhile markets: there is a sprawling, older market which is mainly where locals ago, along with a newer tourist market that mainly sells high-quality artisan crafts. It can be easy to get lost amid the housewares, clothing and food sections, but there is also a big artisan area in the older market full of handmade goods at really good price. So if you want to go to the market, make sure that you stress to your taxi driver that you are wanting to go to Mercado Viejo and not the tourist market that most travelers go to.

Nicaragua has 25 volcanoes, with nine of them active (or ones that have erupted during the last 2,000 years at least). Granada and Masaya are two that are nearby. I recommend that you hike Masay, since it provides stunning views of the volcano as well as Mombacho, Granada and Laguna de Apoyo, which is a serene crater lake.

The best way of seeing Masaya is at night. If you get there during the late afternoon (by 4 p.m. at the latest), there is a night tour that you can sign up for that is led by park guides. It gives you plenty of time for browsing the visitor center and hiking (or getting a ride) up to the top of Masaya crater, which has steam and sulfur pouring out of it. The night tour begins there at around 5:30 p.m. You can begin with hiking up the volcano’s crest, and then put on a hardhat, and start making your way down the lava tubes, which is the home of hundreds of bats.

7. Rough It On La Isla Ometepe

You can go on a 90-minute bus ride from Granada, and then take a 90-minute ferry ride to visit the very low-key and rustic La Isla Ometepe, which is the center of Lake Nicaragua. The island is comprised of two volcanoes, Maderas and Concepcion, and everything revolves around them.

Only around half or less of the islands have paved roads; after you get to the far side of either of the volcanoes, it starts getting very bumpy, difficult and slow. Transportation is very challenging. So be prepared having to pay high hired car fees and also to get stuck in places where there are no rides. If you try relying on the unreliable and slow bus system you will end up waiting for hours. Or you can rent a motorcycle like we did for about $35 a day. You will be completely charmed by Ometepe, with all of the hiking opportunities, as well as kayaking on the Rio Istan, the Charco Verde reserve with all of its howler monkeys and the coffee co-op plantations. A majority of accommodations are fincas – which are working farms – ranging from quite comfortable to very basic.

What are your favorite things to do in Nicaragua?