Victorinox Swiss Army Knife – The One and Only

My son is into knives.  I’m not proud of this statement.

Since he started taking his wilderness class at school and going on multiple camping trips, his love for pocket knives has grown so much that it’s to the point where he looks weird talking about the subject so passionately without having one to claim his own.

Secretively, I’ve been searching to get him one as a gift for his outdoor activities. And with all the amazing knives out there, few compare to the original Swiss Army Knife by Victorinox.

Victorinox started in 1884 as a small army knives shop with the idea of revolutionizing knives by uniting them with other tools in a compact case.

The Swiss Army Knives they have are insane. The tools that they come with really vary depending on the model. And have from the most basic to the full on set for living in the woods for months (well, at least to me it seems so). Some even have electronic components like alarms, altimeters, thermometers, barometers and digital clocks. We didn’t go that route.

But check out the knife I ended up getting for my son. Which by the way I plan on using whenever possible.

I’ve completely fallen in love with it. It’s so practical that I’ve already used it tons of times in the house. You don’t even need to step outside to understand the amazingness this little gadget offers. 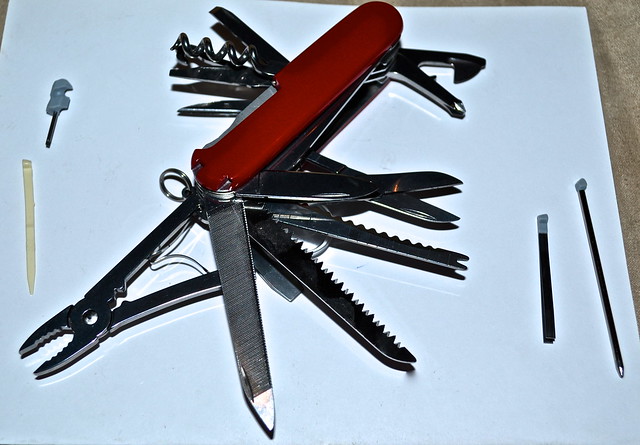 After 20 I lost count of all the different tools it has. But does it really matter. The most important thing is I feel like if there is any sort of emergency we are fully covered in the tool department.

I would head on over to their main site and simply spend a couple of hours wandering through all their different products. I was really tempted to get the ones with the electric gadgets, but wanted to keep the tech (as basic as it was) out of the picture, to keep it simple. But they were really cool.

I also became a fan of their Facebook page and have gotten tons of insider deals too. Plus, Twitter followers can find some last minute ideas as well.

One thought on “Victorinox Swiss Army Knife – The One and Only”