Boston is a city that has so many monumental beginnings and first doings not only for the United States of America but for the entire world that it’s impossible not to become a bit of a history buff as you tour around this curvy, gorgeous, waterfront city. When I read that the oldest restaurant in Boston and the oldest restaurant in America, 1826 – the Union Oyster House, I knew I couldn’t miss out on a chance to eat there with my family. 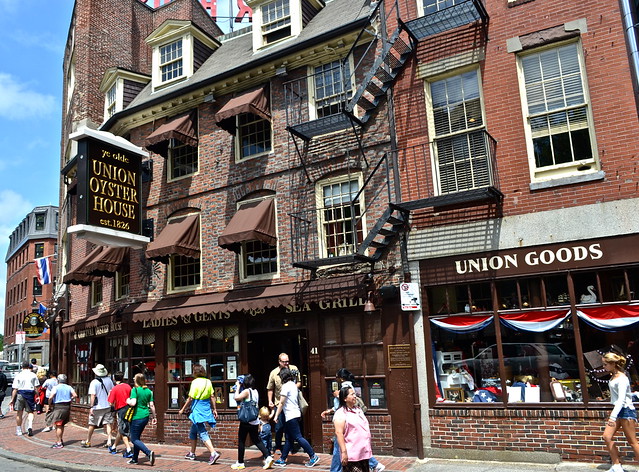 Where is Union Oyster House located?

Directions – 41 Union Street – the street itself was first laid out in 1636 and apparently, the building was too (more info below)

Arriving at the restaurant is part of the experience. You can either take the metro (first subway in the United States) or a taxi, or you can walk over to it from where ever you are since Boston is known as the ‘Walking City’.

And if you can believe it, the restaurant is located in North End  – the first neighborhood of the United States. It’s incredibly easy to find and the little street it’s on is quintessential Boston with cobblestone and brick structures. We spent a good thirty minutes simply enjoying the block and the narrow roads around it.

I’ll get into all the history fun facts in a bit. The main reason is simply that it’s so unique and different! To me, it was more of an attraction rather than just a lunchtime sit-down.

We had a super treat awaiting us as well. The manager, James Malinn, took us on a tour of the restaurant and brought life to the building.

Note: the staff are super friendly and are a wealth of knowledge. I would really recommend asking them to show you around, or giving a bit of history. It will allow you and your kids to really get a feel for the place.

1. The entire restaurant is like a museum – Once we got seated and ordered the food, we started our tour.  There are pictures of all the different high-profile people that have visited the restaurant. You can read and enjoy the photos all along the walls of the ‘Hall of Fame’ and in the different rooms.  A number of different United States Presidents made this their regular eatery while in town. 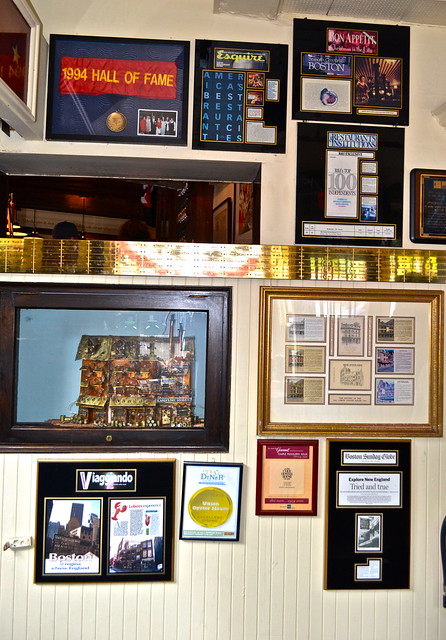 2. The Kennedy Booth – It’s also important to remember that this place was the number one restaurant for the Kennedy Clan and JFK used to frequent it here for almost all his life. The booth is upstairs in a more private area, and he used to actually do a lot of his writing, talking, and contemplating when serving a term in the White House while visiting his home state.

He sat in the same booth and after his death, it was dedicated to him. We were lucky enough to have it reserved for us. 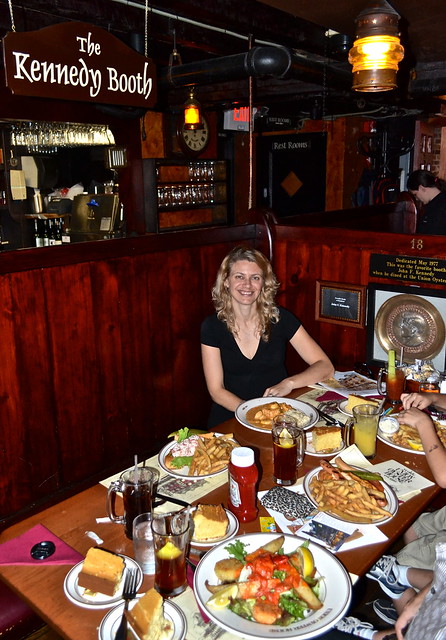 3. The Raw Bar – In 1830 the first owners placed this raw Oyster bar which was the original restaurant and a fun hang out for Bostonians.

Fun fact – the toothpick was first used at the Oyster Bar.

4.  Rooms galore – since it opened in 1826 the restaurant has gone under a few changes, some of which the owners expanded and added more rooms. It’s literally like a maze in there. We dined in the Pine Room where the Kennedy Booth stands, but they also have the Freedom Trail room, Daniel Webster room, Colonial Room, the main room where the Oyster bar is and a few others each with a different design. You can eat in complete privacy for a big group or be part of the crowd and still have plenty of space all around you. 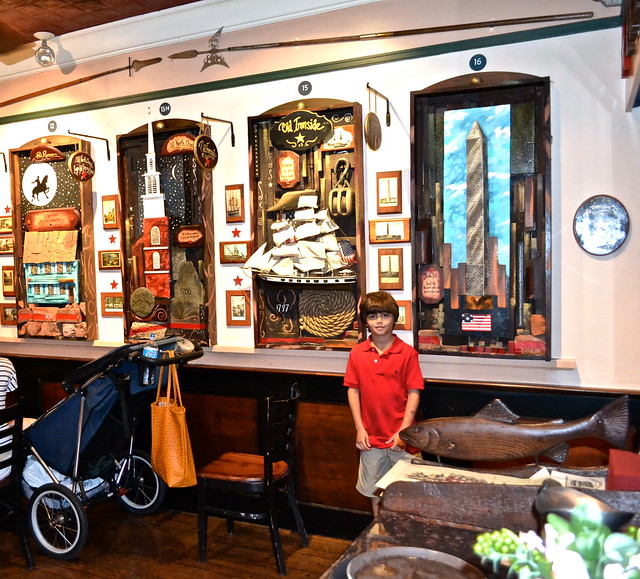 5. Menu – Seafood, Oysters, Lobsters are a given. But there is plenty for meat-eaters, vegetarians, and insanely picky kid eaters (like my sons). 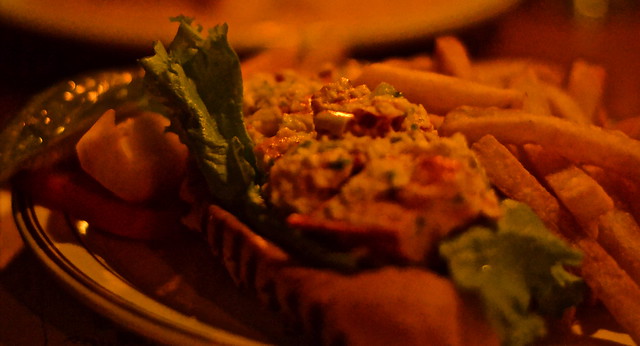 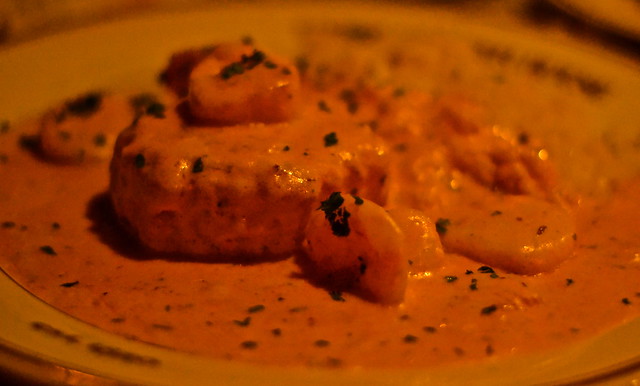 Boston Cream Pie – you have to try this while in Boston 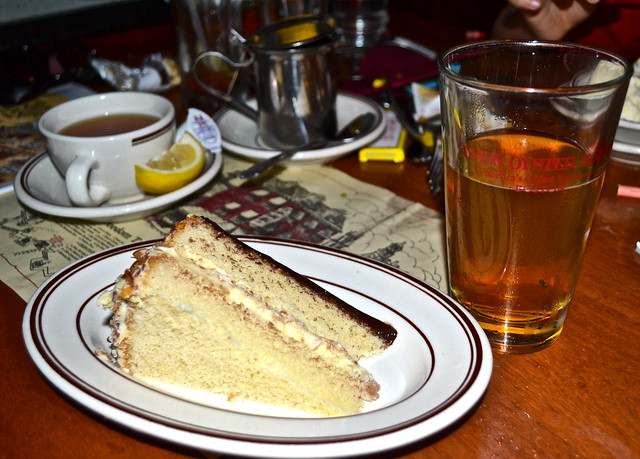 6. Staff and entertainment – As you enter the restaurant you are welcomed by a huge tank of Lobsters. The staff, mainly the cooks of the Oyster Bar, allow kids to hold a lobster in their hands. A definite treat for kids of all ages! 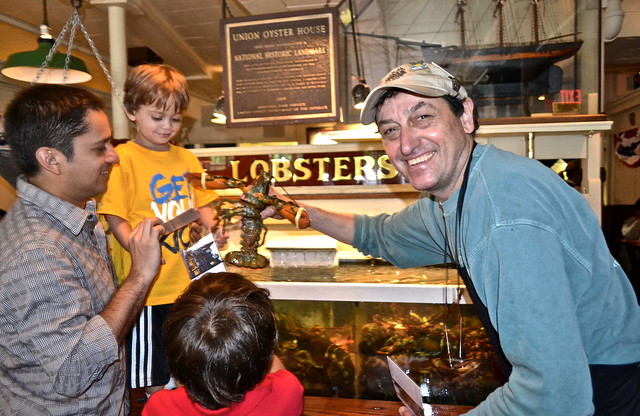 1. 1636 – Union Street was first laid out. There are no municipal records documenting when the building was built on it.

2. It stood as a local landmark for over 250 years

3. 1742 – The building was for Hopestill Capen’s fancy dress good business known as “At the Sign of the Cornfields.”

4. 1771 – The upper floor was used when the first stirrings of the American Revolution war started and printer Isaiah Thomas published his newspaper “The Massachusetts Spy”. Also known as the oldest Newspaper in the US.

5. 1775 – The store became headquarters for Ebenezer Hancock – paymaster of the Colonial Army. This is where the Federal troops received their “war wages”. And also a place where George Washington frequented.

6. 1796 – Louis Phillippe, future king of France, was exiled by his country and lived on the second floor where he also gave French lessons to Boston’s upper class ladies.

7. 1826 – the building was bought and became Atwood and Bacon’s establishment.

8. 1830 – the fabled Oyster bar was installed and beginning of an new era. It was also the place where Daniel Webster drank a tall tumble of brandy and water with at least half a dozen oysters on each plate – over 6 plates – every single day!

The Union Oyster House isn’t only the oldest continually operating restaurant in the US but it is also the earliest standing brick building in Boston’s Georgian architecture. 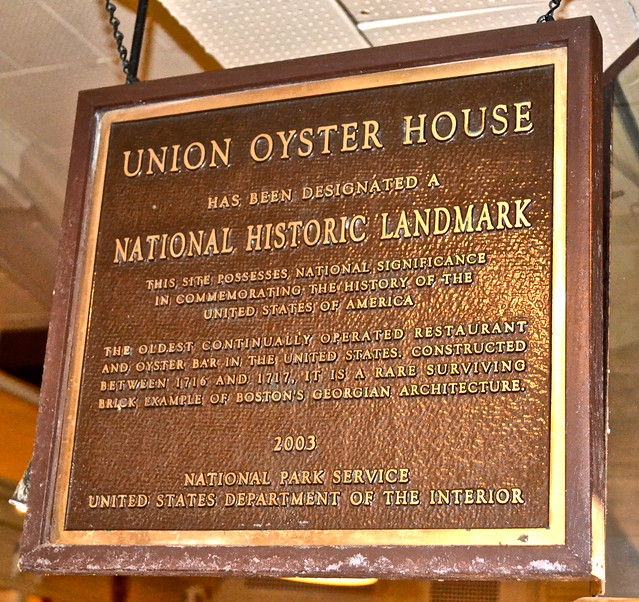 I bet you can’t say all this about any other restaurant you’ve visited!

Information for your visit to Union Oyster House

You can also reserve directly from their site.

Greater Boston Convention & Visitors Bureau helped me in planning parts of my Boston visit and with their great help I was able to really enjoy and experience the Union Oyster House.

14 thoughts on “Union Oyster House: The Oldest Restaurant In America”