Doing a private Medellin City tour is hard work and requires fuel for the body. And what better way to enjoy lunchtime than tasting a traditional Medellin meal – Bandeja Paisa.

Meals aren’t included in the City Tour by Colombia Travel Operator, but it is definitely part of the tour and a tiny expense which is so worth it. Plus, you only pay for yourself, unlike some tours I was researching that require you to pay for yourself and the guide.

The place John, my guide, took me to is probably the most traditional style Medellin eatery – Mondongos. When we arrived it was actually much later than lunch, around 2 pm, and in the middle of the week (during work hours and no holidays) and the place was so packed there was a waiting line.  It went fast, but still – really impressive. And the best part, I was the only tourist there. Goes to show that Paisa’s (Medellin locals) love it and that is always a good sign. 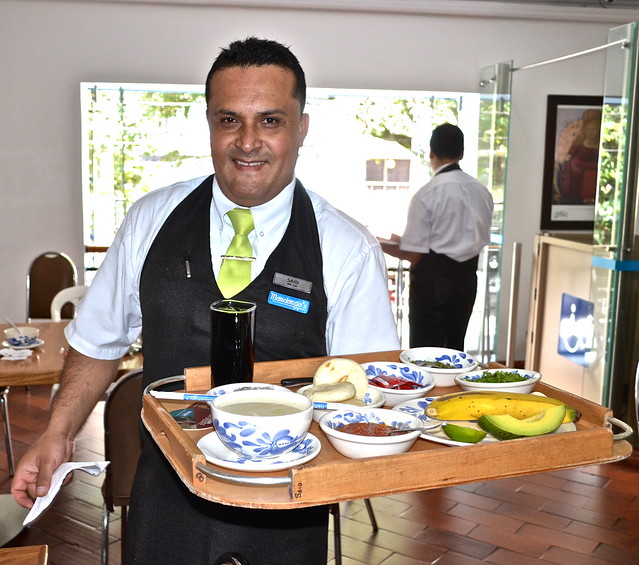 Why is the place called Mondongos? Because Mondongo itself is a super traditional meal. Even though we came for the Bandeja Paisa, they have the option to get bowl of Mondongo soup with the main platter. Which I did, reluctantly.

Why reluctantly? Because mondongo itself is cow tripe, intestines. Confession time – I am an extremely picky eater. I’m open to trying new foods, but to an extent. In other words, I’m no Anthony Bourdain. So the idea of eating anything with animal guts is simply a huge turn off for me. But I figured, I can eat around it and how many times will I be in Medellin, anyway? 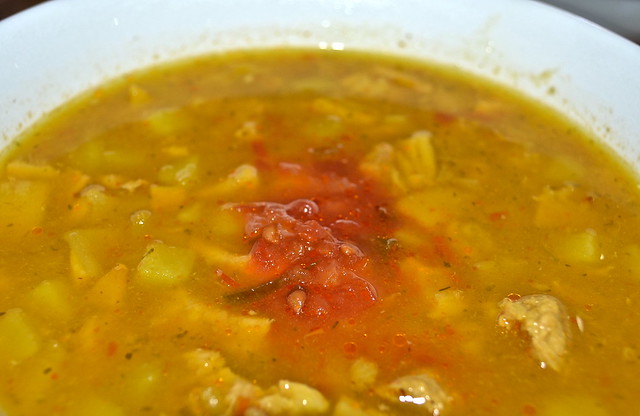 Ok, so it wasn’t that bad. It was hearty and flavorful due to all the veggies. Let’s just say, in the end, I was proud of myself for giving it a go.

Paisa is the name used for the local people of Medellin. And this meal is their most traditional, fully loaded, dish which will fill you up for the entire day and then some.

Another name for this Bandeja Arriero. Arrieros are people who transported goods by mules and horses from one area to another. Mainly it was food transport of coffee, maize, wheat and other things. Needless to say, it wasn’t an easy job. The Bandeja Paisa, or Bandeja Arriero, was their main food source and it had to be full of protein and starch due to the arduous treks they endured and had to be fed properly. 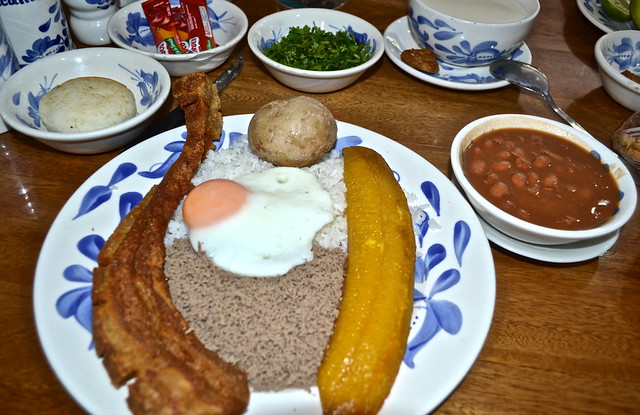 What is Served in a Bandeja Paisa:

Mine came with a piece of chicharron the size of a 300x magnified piece of bacon. I couldn’t even make a dent in it. All I thought about was my arteries are going to clog up on me. Plantain also of immense proportions, beans which were yummy, ground beef, egg, rice and potato.

To say the least, I barely ate 25% of it and was beyond full for the rest of the day.

To go along with my meal I was recommended to try the drink – Mazamorra.  Let’s just say, when it arrived I was shocked to see my ‘drink’ disguised as a soup. 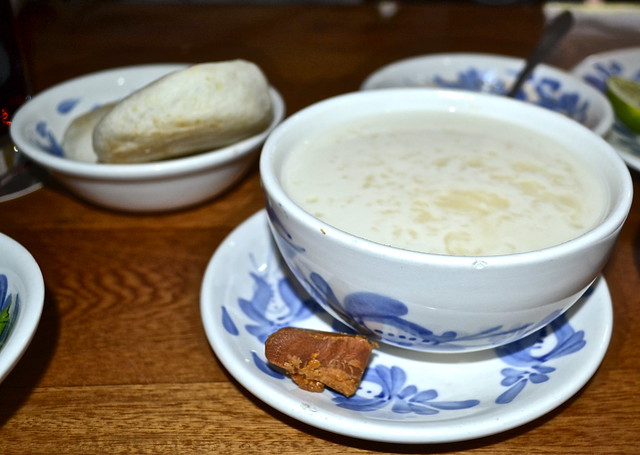 Mazamorra is a maize based dish. In my case it was so liquidy that it is more of a drink than a soup. It’s served cold. With corn at the bottom. But since it’s quite flavorless (their description) they bring over panela and dulce de leche with coconut to put in it, which definitely makes it a more interesting and refreshing treat.