You will never get bored in Costa Rica’s Gulf of Papagayo. It is formed by 12 beaches outlined by great resorts and rainforests filled with wildlife. Here are the best things to do in Guanacaste, Costa Rica.

What Do You Need to Know About Guanacaste?

Guanacaste is a province located on the northwest side of Costa Rica, bordering the Nicoya peninsula in the south. It’s often called the region “gold coast”, has grown a lot in popularity, due to its many beaches and culture. A place where the dry and flat plain merges with a dry tropical forest to make a unique landscape that looks like scenery from a “wild west” movie.

But the biggest draw of Guanacaste is the popular town of Tamarindo, this town has grown a lot in popularity due to its amazing beaches, which are some of the most popular too, and the nightlife and great restaurants. Playa Tamarindo is a well-known place for surfing.  But don’t let this fool you, there are a ton of things to do in Guanacaste, from canopy tours to ATV and parasailing.

Things to Do in Guanacaste Costa Rica

Canopy Tours may include a combination of heart-stopping cables, hanging bridges, and family-friendly courses. There are two options in the area. The first one is near Santa Rosa National Park, the area’s most thrilling canopy tour. The other one is just outside Playa Ocotal, it’s family-friendly and lasts approximately one hour. 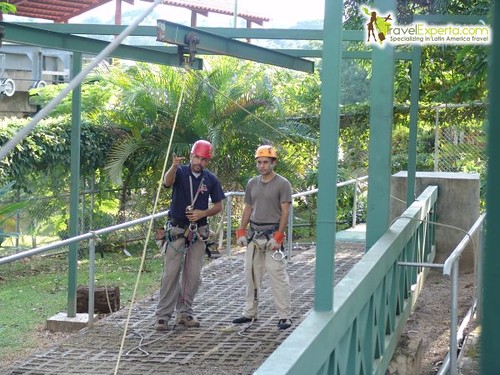 Get ready to feel the adrenaline of flying through the air with only a parachute behind you and a speedboat below.

Race through sugar cane fields and maneuver along the coast’s rocky terrain as you discover the area. Often you will be accompanied by birds, butterflies, and inquisitive howler monkeys. 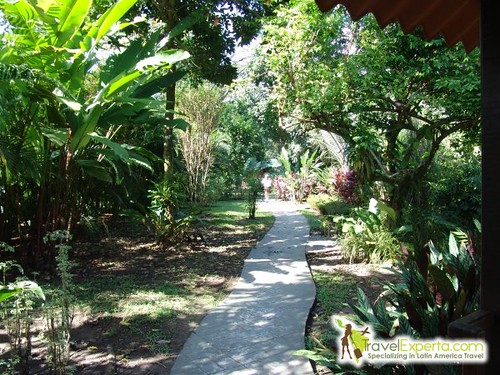 Bird and Wildlife Watching in Guanacaste

Palo Verde National Park, The Lomas de Barbudal Biological Reserve, and Africa Mia are home to several plant and animals species such as:

You can choose from many different treatments like a natural mud mask or a deep tissue massage at one of the local day spas. Most of the spas are located in the Papagayo’s all-inclusive hotels.

Santa Rosa National Park, Guanacaste National Park, Rincon de la Vieja National Park, and Barra Honda National Park are threaded with some of the country’s most well-groomed and beautiful hiking trails. If you don’t want to go too, far in Papagayo you will find many beach walkways, forgotten roads, and hiking paths to explore.

There are many places in the area where you can rent horses for trips to exhilarating waterfalls, hidden beaches, and favorite local spots. 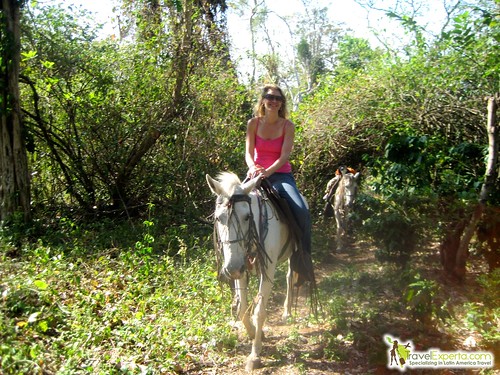 The Northern Pacific’s golf courses in Costa Rica offer sweeping ocean views, beautiful greens, and championship holes. The golf country clubs range from fancy to decidedly informal, so you will find the right one for you.

Rent a bike and enjoy the quieter side of Papagayo, where birds, monkeys, and other wildlife live. Footpaths and dirt roads create the perfect biking ambiance.

Small stands dot the beaches and streets, with wares of coconut shell jewelry, hand-beaded belts, beautiful wood crafts, and many other unique gifts.

Hop aboard a banana boat and prepare for a wet afternoon of splashing and falling. Banana boat tours typically leave from Papagayo’s biggest hotels, and are perfect for groups.

Rent a canoe or sea kayak and paddle out onto the open Pacific. Along the Papagayo Gulf, sea kayaking is especially wonderful because of all the tiny, secluded beaches that dot the coast.

You can rent jet skis along the coast or go on a tour that generally last two to three hours.

Float down the peaceful Tempisque River or through Palo Verde’s canals. On both trips, you’ll see American crocodiles, birds, monkeys, and many other species.

Sailing tours will take you to some of the coast’s most tranquil islands and quiet beaches. Keep your eyes peeled for dolphins, turtles, and the occasional whale. Many sailboat tours will allow you to snorkel.

There are half and full-day snorkeling tours that will take you to islands, hard-to-reach beaches, or secluded coral reefs.

Most of the area’s sailboat companies offer spectacular sunset and dinner tours. These tours give you the opportunity to dine on gourmet fare and watch as the sun sets turns into brilliant reds, oranges, and relaxed pinks. 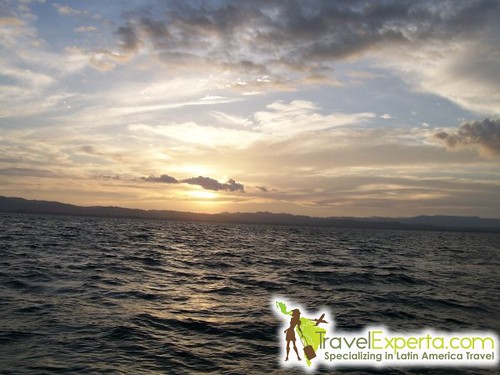 Spend an afternoon or an entire week aboard a sportfishing boat, reeling in some of the strongest fighters in Costa Rica. Common catches are:

Waves are very gentle in Papagayo’s protected cove, but Playa del Coco, just 15 minutes south, is perfect for the hunt for first-class waves. No matter your skill level, this slice of paradise has waves to match. Witch’s Rock at Playa Naranjo is home to some of the best breaks in Costa Rica.

How to Get There and Around

The best way to get to Guanacaste is by flying. A ton of international airports in the United States have flights that arrive at the Liberia International Airport (LIR) in Guanacaste. After you’re in Liberia, getting around in Guanacaste is easy and the best option you have is by taxi, private shuttles, or renting a car if you want to fully experience the driving culture of the area.

You can also opt for the bus, this way can immerse yourself a lot in the culture. Costa Rica’s public transport is good, so, getting around Guanacaste won’t be a problem.

Guanacaste is such an amazing place that I can safely say, anywhere you choose to stay within the province will be a good choice. You can’t go wrong here. But one of the most popular places to stay in Guanacaste is the Northern Nicoya Peninsula Coast, which can be reached easily from the Liberia International airport.

On the Northern Nicoya Peninsula Coast, you’ll find the towns of Matapalo,  Playa Hermosa, Culebra, and Playas del Coco, which are busy tourist areas.  This is where you’ll find the Four Seasons Resort Costa Rica, one of the most luxurious hotels in the area.

Guanacaste is a great place for beach lovers, and it has many beaches to offer to tourists. So, you can go wrong here, just bring beach gear. Don’t forget your favorite book and your towel, but in case you do, here’s a list: 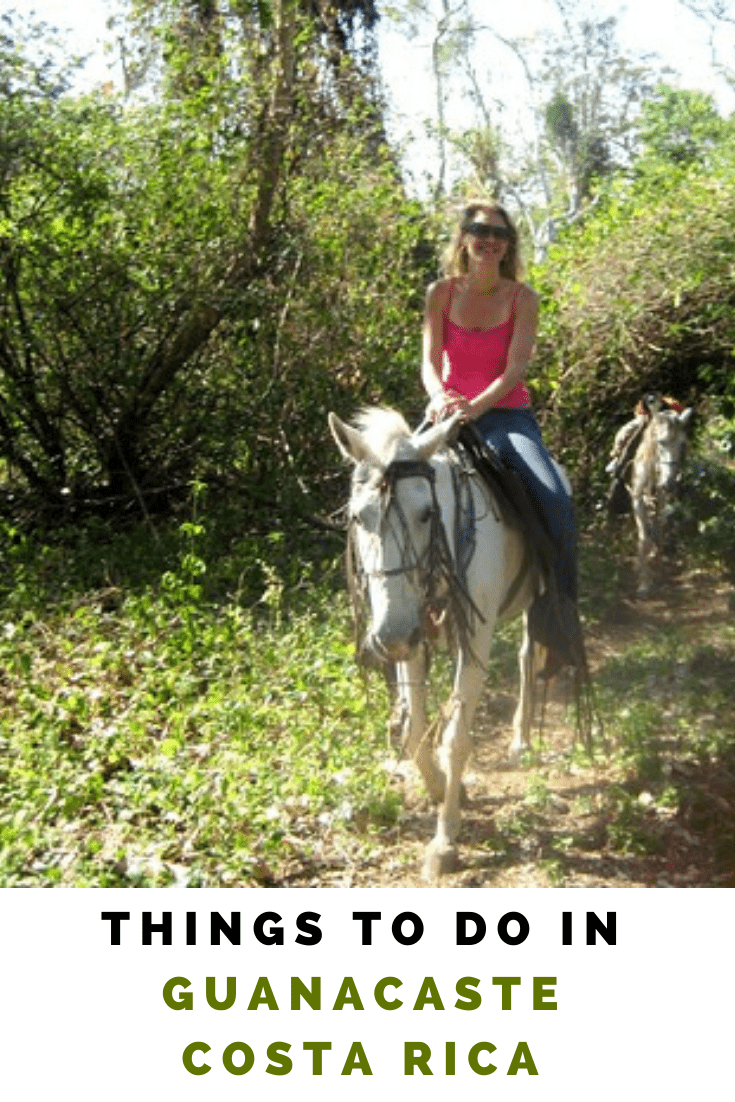