Sea Turtles That Nest in Guatemala: What You Need to Know

You might know Guatemala as the tiny country that was once the land of the Mayan civilization due to the number of archaeological sites in it. Or maybe you know it as the place for a tiny colonial-styled city that was once the capital of the whole Central American territory. The adventurous ones might know it as a place filled with tons of mountains and volcanoes covered with dense forests and divided by rivers to explore. Or maybe you heard that it is a good place to learn Spanish at a good price. Guatemala is well known for tons of animals and its sea turtles, mountains, its ancient Mayan roots, and colonial past. Learn how to be part of this huge effort. 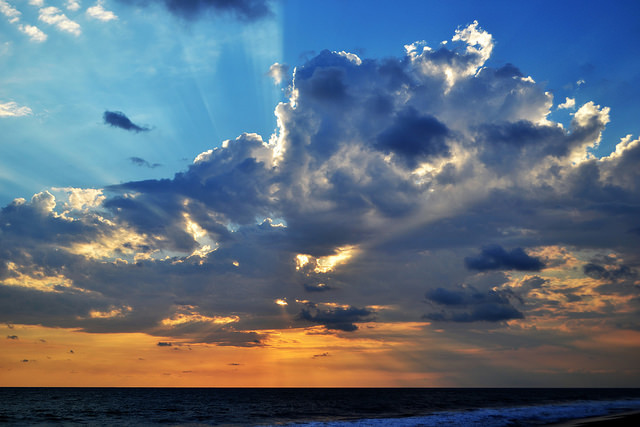 Those are all great reasons to come to the country, but there is yet another one that not a lot of travelers are aware of. That’s its Pacific Coast.

You won’t find crystal clear, calm waters or white sand or large all-inclusive resorts on this side of the country but it is an important area for wildlife conservation. This is the nesting site for three species of endangered sea turtles. It is in fact one of the few places in the world that receives so many species. Plus, these turtles are extremely important to preserving marine habitats.

For that reason, tons of locals and foreigners have started working towards protecting them from poachers. There are anywhere from 10 to 15 organizations protecting sea turtle eggs and making sure the largest amount of them results in healthy baby turtles that are later released on the sea.

But before talking about the different organizations doing this work and offering turtle release tours, lets learn about the sea turtles that you might be able to run into if you visit during the nesting season.

Sea Turtles That Nest In Guatemala

These might be the species of a sea turtle with the healthiest population out there, however even they are endangered. They love open ocean inhabitants so you will never see them near reefs. In Guatemala, they can be seen nesting in Monterrey. Here are 5 facts about them: 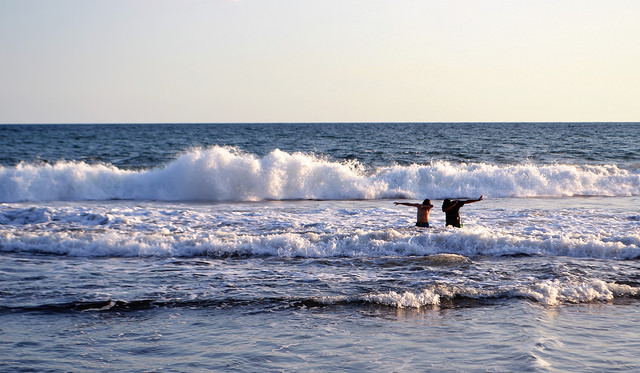 1. They make an amazing trip across the ocean from the Atlantic Ocean to return to nest on the same beach they are born.
2. They get their names after the olive-green color of its heart-shaped shell.
3. The olive riddle turtle nesting season happens in Guatemala’s rainy season, peaking in September, but low nesting (2-4 turtles per night) occurs throughout the year.
4. There are no large arribadas in Guatemala’s coasts due to the excessive commercialization of their eggs.

Contrary to the Olive Ridley, these guys spend most of their time in shallow water and coral reefs. This makes them especially vulnerable to human contact and depredation and are now critically endangered. Check out these facts about them:

1. Due to its consumption of venomous cnidarians, hawksbill sea turtle flesh can become toxic. Yet another reason not to bother them!
2. The hawksbill gets its name for the look of its long and pointy nose. It is used to be able to break the hard coral reef that they feed on.
3. Because of their tough carapaces, adults’ only predators are sharks, estuarine crocodiles, octopuses, and some species of pelagic fish.
4. The nesting season for this species is from June to July.

This is the largest of all sea turtle species out there. Another thing that makes it special and easy to distinguish from other species is the fact that it doesn’t have a bony shell. Instead, if you touch it you will notice that it is covered in a dark oily type of skin. Here are 5 other facts about them:

1. As I said before, these are the largest sea turtles out there, they can reach up to 2 meters long.
2. Leather back turtles are one of the deepest diving marine animals. Individuals have been recorded diving to depths as great as 1,280m. Typical dive durations are between 3 and 8 minutes, but dives of 30–70 minutes have been recorded often.
3. Leather back turtles can be found primarily in the open ocean, and their diet consists mainly of jellyfish.
4. You can see some leather back making their way into the Guatemalan beaches from December to February. You won’t see large groups of them, but the number is slowly rising each year. 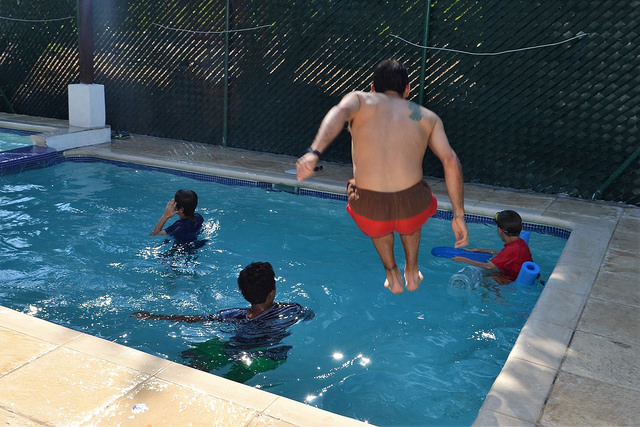 Where to Stay When Rescuing Sea Turtles

Most of the turtle releasing centers are in and around Monterrico. This is the main town of the area, where most of the hotels and restaurants are.

Whenever we’ve stayed in the area, we usually stayed at one of the hotels. The problem I find with most of the hotels here, which the town is filled with, are usually budget-style hotels with only two that are more on the comfort and luxury side, which in this area means air conditioning and screened-off rooms.

Not that I’m one of those air-condition-only people, but on the Guatemalan coast it is a necessity. And the mosquitos can be relentless, so when you have an air-conditioned room, it pretty much guarantees that the room will be almost mosquito-free.

Plus, traveling with kids I have truly fallen in love with having a home away from home, as in, staying in vacation rentals. Funny enough, having a full beach house with a pool is almost the same price as a one-room in a hotel with air conditioning.

With a house, you get a living space, kitchen, bedroom(s), several bathrooms, and, most importantly, an awesome outside area with a private pool.

Last time we visited the beach, we stayed at Casa Pelicanos. Now that my kids were begging to rescue the turtles, I couldn’t think of a better way to do it. 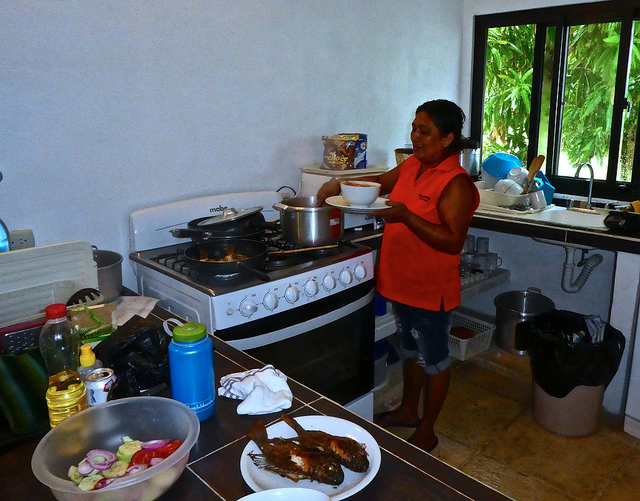 Of the vacation rental complex, there are seven in total, varying in sizes from 12 people to 24 people-sized. All have private pools and are two minutes from a gorgeous, almost private beach. It is not right in the heart of Monterrico, which in my opinion is a good thing. It’s about twenty minutes car ride.

Outside of having AC, a private pool, and footsteps from the beach, they offer some seriously great perks. The one we took full advantage of was the private chef.

Before heading to the rescue center, she came over and cooked us up the fresh seafood lunch.

For less than $30 we had homemade fried shrimp, which the lady bought fresh from the fisherman, with rice and a fresh salad.

This fed eight people. Yes, that’s right. For the price of what would normally be for two people, Casa Pelicanos offers this incredible service, and you don’t have to leave the comfort of your own home.

After lunch, with full bellies, we were off to meet some baby turtles. 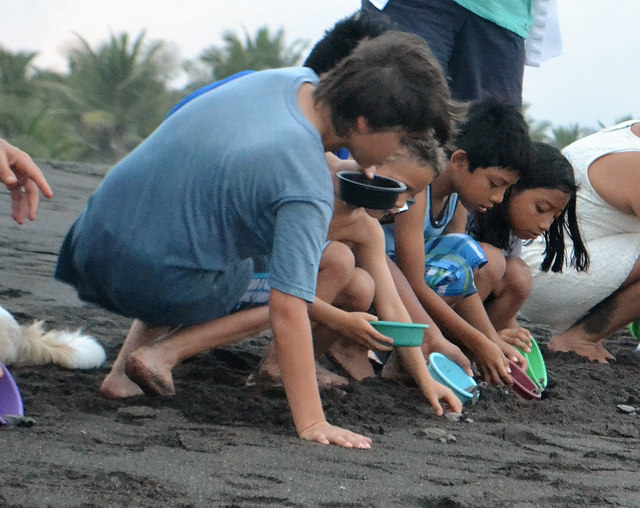 According to the government, there are over 21 organizations doing a great job but I only know of five on different spots of the Pacific Coast:

You will find this one in a small town called El Banco, in the Santa Rosa Department. They work with the community with a donation kind of style. Locals allow them to have 20 eggs from each nest that is found (sea turtle eggs are normally commercialized s locals don’t allow them to take them all). The eggs are then taken to protected areas where the little turtles can be born safely. They have been doing this for 16 years.

It is the result of an educational project from Instituto Austricaco and Colegio Viena, two large schools of the country. It has been working for 25 years with a double purpose: a) educating new generations about the importance of Sea turtles and b) fighting the extinction of these animals by looking after eggs and making sure as many baby turtles as possible reach the sea. Visitors can spend the night in it for $5.

Also known as ARCAS. It was born in 2001 and is located in Monterrico. In 2015 they were able to rescue, 14114 Olive Riddle eggs. Aside from 2 sea turtle rescue centers, they also have one for other endangered animals up north in Peten.

This is the second location of ARCAS dedicated to protecting sea turtles. 41256 were rescued by them last year. They also dedicate their efforts to caring for injured crocodiles and iguanas.

This project started in 1982 and has had a lot of trouble take off. Mainly because of the lack of financial support of the government. However, they managed to find a group of local volunteers that have been working hard, but money is still tight. If you’d like to help you can find the contact information for its director at the bottom of this article. 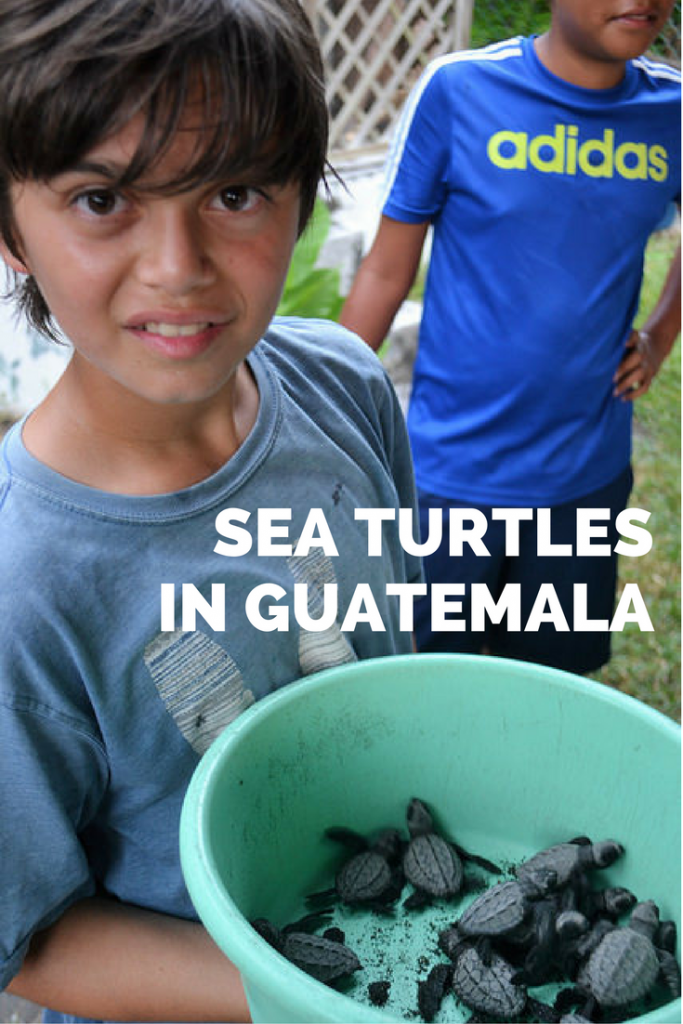 3 thoughts on “Sea Turtles That Nest in Guatemala: What You Need to Know”