Barcelona is renowned for being a super cool city. Located in Spain, Europe with a population of 1.6 million, it is also Spain’s second-largest city. Tourism makes up a large part of Barcelona’s economy, and it is easy to see why. Barcelona is home to some of the most beautiful world heritage sites, places of cultural and sporting interest; there truly is something for everyone about places to visit in Barcelona, Spain.

Barcelona has been by far one of my favorite cities to visit in Spain. It offers a crazy combination of the modern and the old that will make you want to explore every corner of it. It’s amazing how many family-friendly destinations you can find in Spain, but Barcelona is the top choice for this! You will never have enough time for it, though! 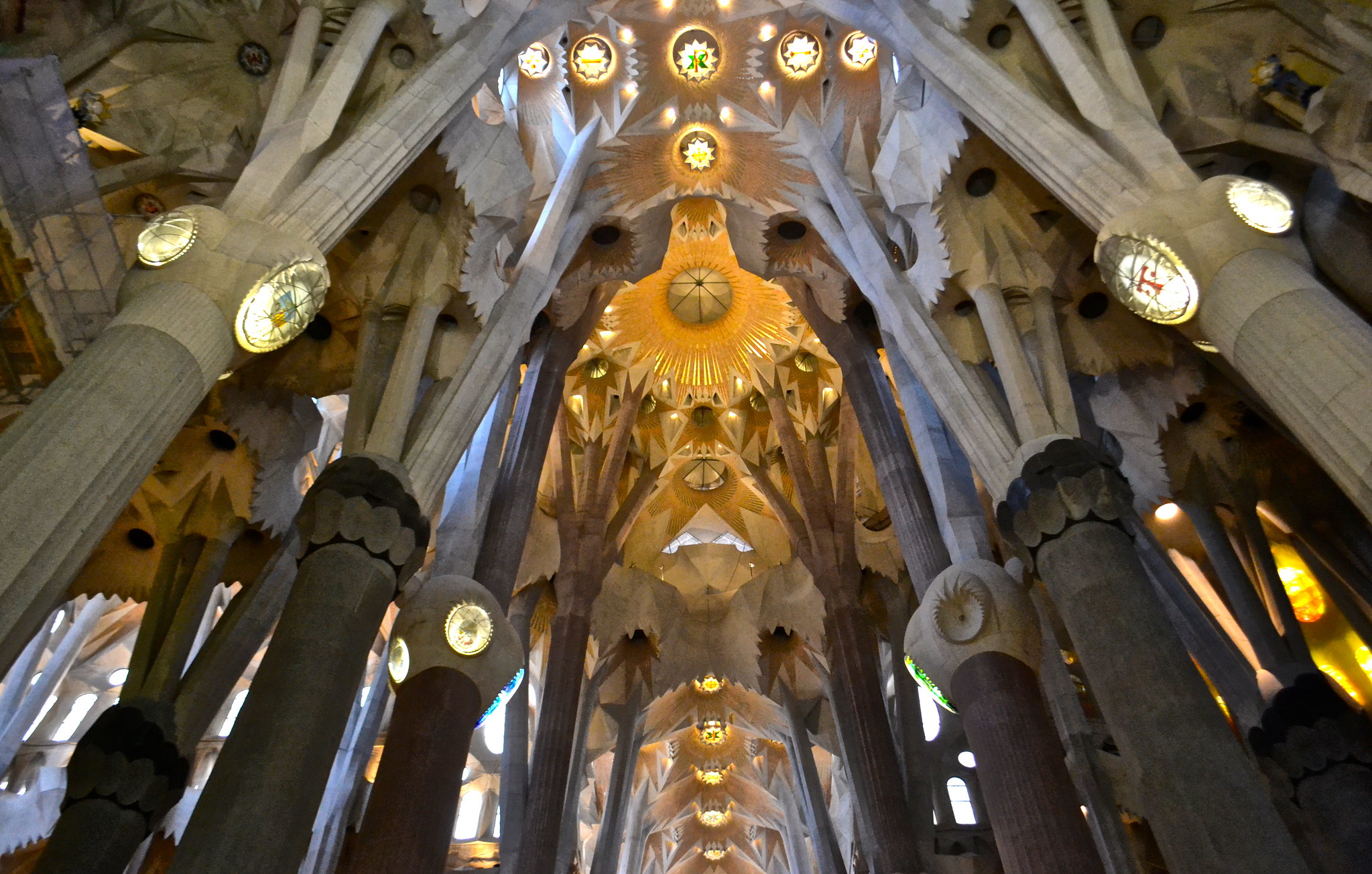 Places to Visit in Barcelona

Luckily I was able to explore some of the highlights of the city and loved every second of it. But with so many things, I know that it can be daunting to decide on what to visit with the time you have. So here is my list of recommendations with the top places to visit in Barcelona. I hope it helps you narrow down the ones you want to visit.

There is no doubt that this is Barcelona’s main landmark. This UNESCO-listed Basilica dominates the skyline in the northern area of the city. Antoni Gaudí was commissioned in 1883 to design this basilica. It was originally supposed to be a neo-Gothic church, but he made some changes and went for his signature surrealistic Art Nouveau architecture. The church was never completed.

Luckily, visitors are able to tour the Sagrada Familia, but there are limited spaces, but you need to purchase tickets for Sagrada Familia in advance, they go fast.

This is where you go to experience the fun and lively social life in Barcelona. It is gorgeous, with old-style buildings (including Palau Guell) and tons of trees. It is a lively place with tons of restaurants, shops, large sidewalks, and locals having a good time. The energy here is amazing, especially if you get there while it is live music! It’s one of the best places to start in Barcelona.

Plus, it borders the Gothic Quarter, which I’ll talk about next. 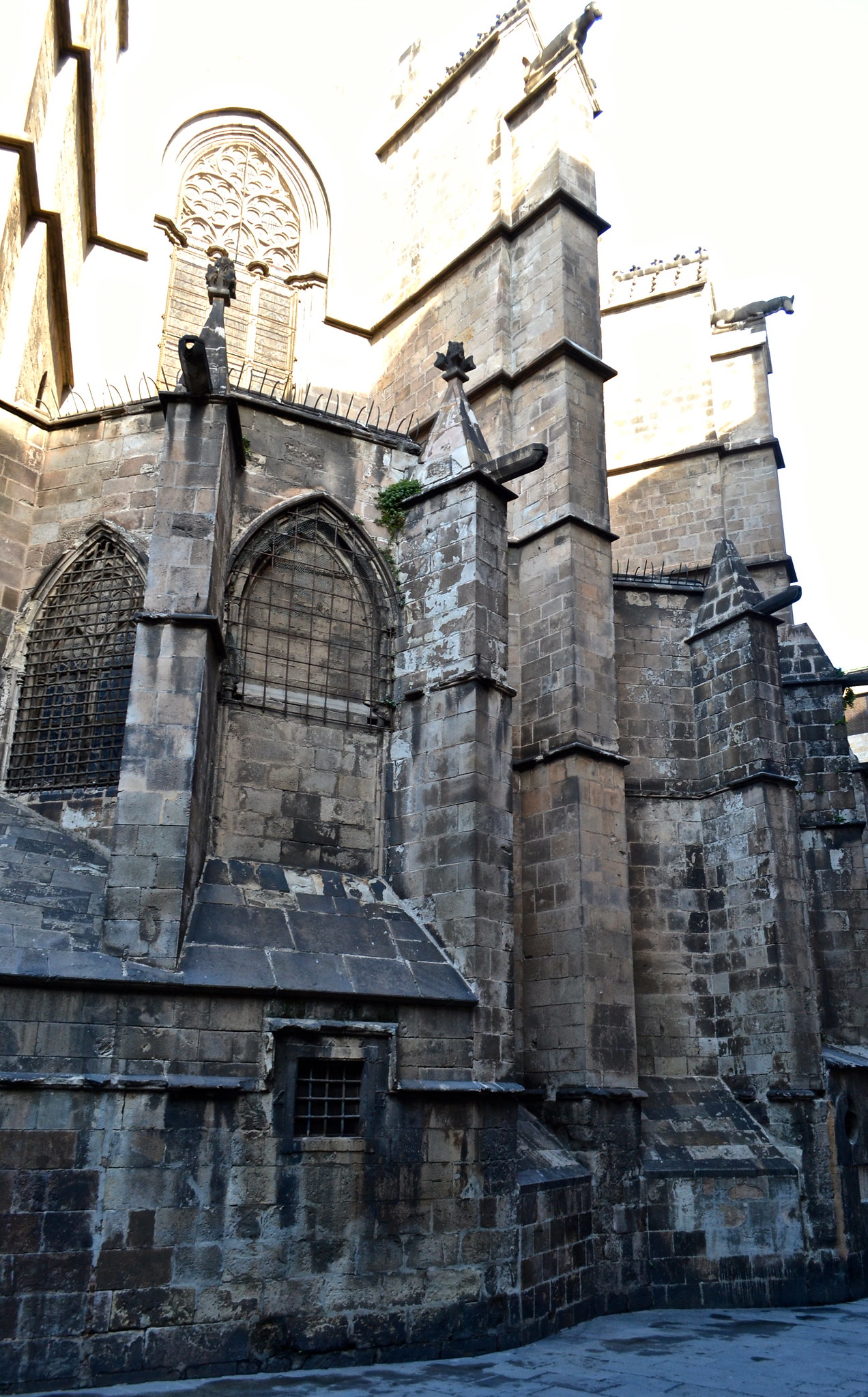 This 2,000-year-old place is usually referred to as the heart and soul of Barcelona. In the Gothic Quarter you can still find relics from Roman times, historic buildings from the Middle ages, and masterpieces of Gothic architecture.

This is also where the discovery of the Americas began taking shape. This is where  Christopher Columbus was received by the Catholic Monarchs after his first voyage to the New World.

Old Barcelona is set deep in the heart of the Gothic Quarter and is an absolute must for architecture fans. The history situated in this gorgeous part of the city is perfect for any traveler that wants to get a deep historical understanding of the country in which they are visiting. Dating from medieval times, the labyrinth street plan is certainly not without its charms, and the buildings and scenery around you are just spectacular. A plethora of gothic churches surrounds you, taking you back in time to a very different Barcelona than you see now.

This stunning building was built between 1905 and 1908. It was designed by the architect Lluís Domènech i Montaner. What makes it so gorgeous is the curved lines of the design combined with all of the color from the interior decor. Its shape and decoration are dedicated to chorals. 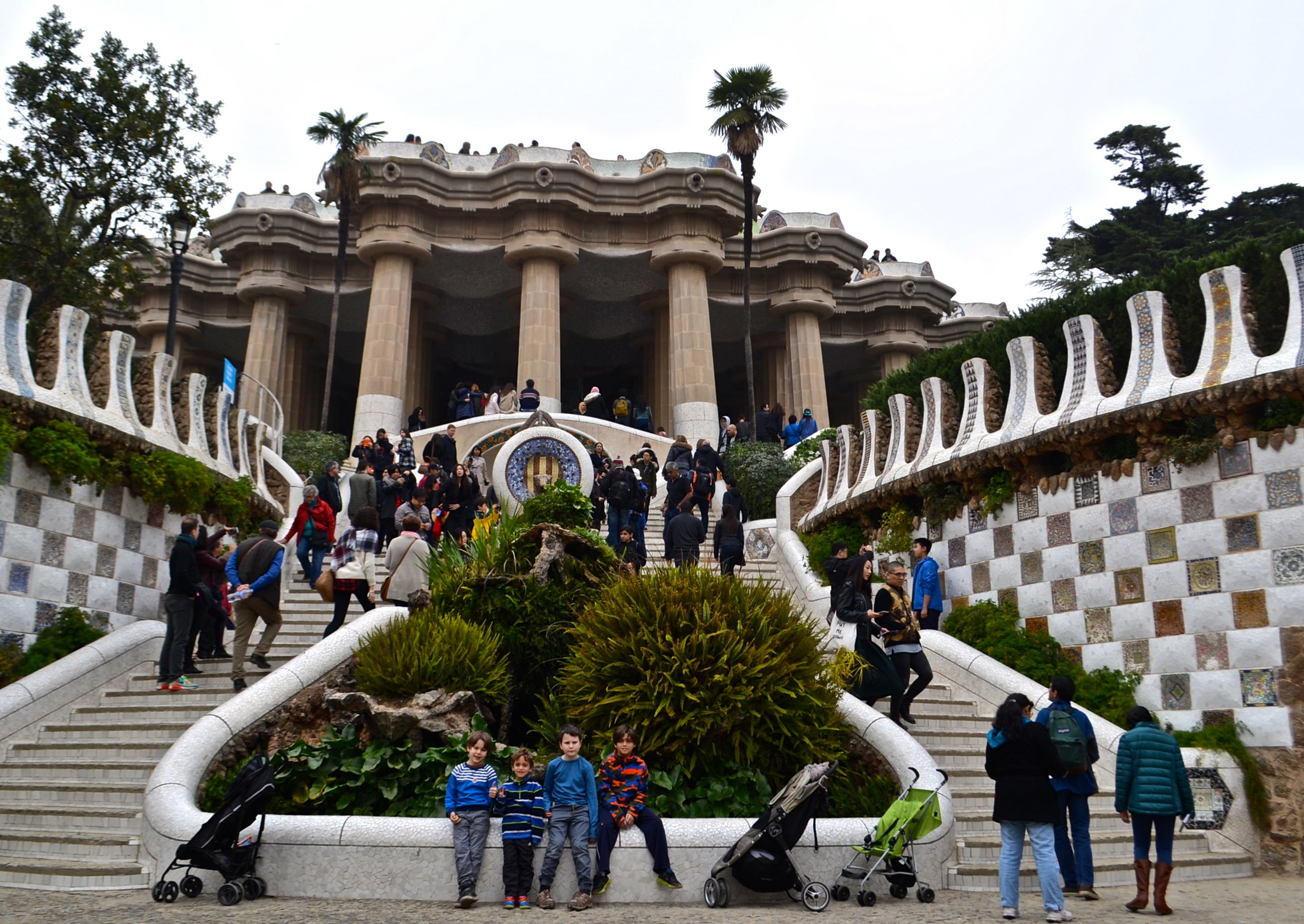 This surrealistic, colorful, and strangely beautiful park is another UNESCO World Heritage Site designed by Antoni Gaudí. It was built between 1900 and 1914 and is made up of many unique features and architectural elements in Gaudí’s signature style.

While at the park, I would recommend visiting the spectacular terrace with panoramic views of the city and the sea first. It is breathtaking.

Bonus fact: The park and a garden surround the house where Gaudi lived. 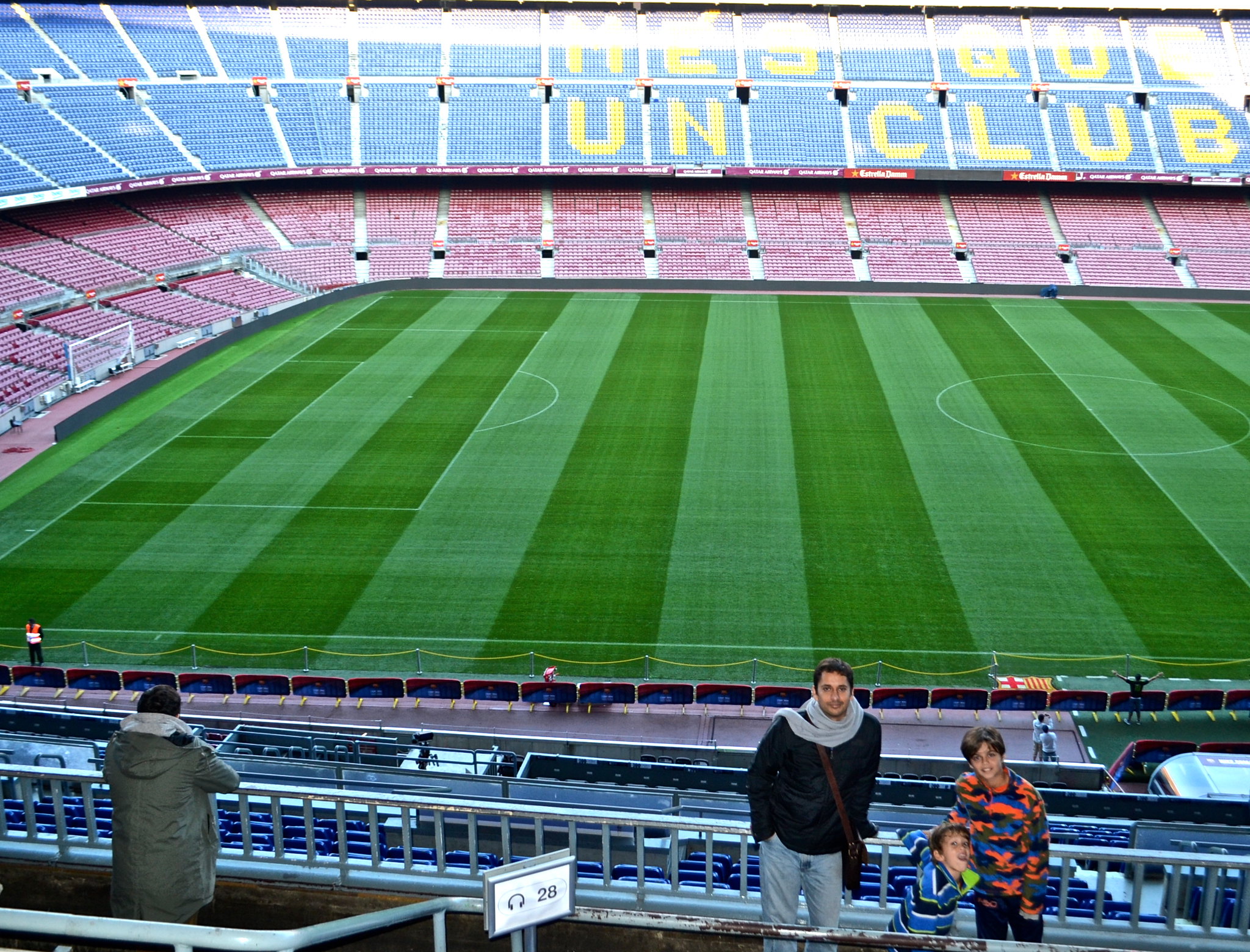 This is completely different from everything that has been mentioned until now on this list. This is a modern building that is a MUST if you are a soccer fan. The impressive stadium is home to FC Barcelona and sits up to 99,354 fans. Camp Nou is the largest stadium in Europe and the second-largest in the world.

Museu Picasso is located in Barcelona, a gallery showcasing Picasso’s earlier works. Pablo Picasso lived in Barcelona for a portion of his life. He joined La Llotja art school and opened his first studio in the gothic Quarter. This museum showcases some of his most stunning artwork and celebrates his life, one of the many reasons to visit Barcelona.

A must for any art lover, the Picasso Barcelona trail is an unofficial, yet incredibly quirky way, of seeing the inspiration of Picasso’s youth. He spent much of his early years in the city of Barcelona, and along the way was inspired by the beauty around him. Be amazed by what the city has to offer, and what ultimately offered Picasso and the world, by visiting Reina Cristina which will lead you to his family home. Although their home has since been destroyed, the visual scenery is simply stunning.

This is a gothic-style basilica that has been towering over El Born neighborhood since the 10th century. Just by standing outside, you will be astonished by its looks, but the real eye candy is inside.

Montjuic mountain is not for the faint-hearted, but is a necessity for the most adventurous traveler. The picturesque scenery is perfect for those wanting to get away from the tourist trail. Buildings from the 1992 Olympic games are situated on the hill and are a must for any sports fan.

Casa Mila, or Le Pedrera, was designed and built between the years 1906-1912. This breathtaking building caused much controversy at the time it was built, due to the use of stone and wrought iron, which was deemed unusual for the time in which it was built. The use of wrought iron features on the balconies showcases a truly gothic feel to the architecture.

The architect, Josep Maria Jujol, was deemed years ahead of his time for this building. Many have criticized Casa Mila, with Le Pedrera translating it into ‘Easter Cake’. However, you should be the judge of this stunning feat of architecture, so contemporary for the time it was built. Casa Mila is a UNESCO World Heritage site and is open to the public all year round. Check out venere.com for hotels in Barcelona.

No trip to Europe is complete without a visit to Barcelona. It is a wonderful contrast between old Spanish history and a cool, urban metropolis. Barcelona is definitely worth a visit. So check out these Barcelona attractions to find more cool places to visit in the city.