Locals, tourists, born-and-raised New Yorkers all have one thing in common. They all love Central Park. And they gather here for all types of events, activities, watching street performers, listening to live music, making out, or having their kids enjoy either the carousel, zoo, or a million other things it offers.

And it doesn’t matter if you’ve lived in New York all your life or are in town for a few days, a good Central Park tour simply brings this amazingly huge, green area in the middle of one of the largest metropolitan cities of the world to life.

At first, I contemplated doing a bike tour of Central Park. On paper, this looks like a great idea, but then you add in the kid component and their whining after fifteen minutes that they are too tired to pedal, I decided the Pedicab Tour would be the perfect combination of adventure, history, and relaxation.

To be honest with you, I didn’t even know about the Pedicab tours until I started my search online for a bike rental. There are several companies to chose from, but the different options that Central Park Tours offered kept me coming back for more. As a matter of fact, I already booked the bikes for my family with them, when I discovered their rickshaw tour (pedicab tour) and decided it’s the way to go.

1. Beware of Scammers – When I was talking to my brother, who lives in Boston, about me wanting to do a pedicab tour he immediately warned me that there have been some serious issues with non-registered pedicabs taking people for rides. And I’m not talking about the actual ride. But overcharging them to the point that it has given reputable companies bad names.  One example was a short one-hour tour costing over $400.

Now, across the US pedicabs have to have their fees in plain sight. But few still follow that rule, taking advantage of uneducated tourists.

Central Park Tours had their prices right on their site. And actually, they went above and beyond that. For instance, we only hired them for one hour, but they ended up giving it to us for almost two and not asking for any extra fees.

The Pedicabs that are honest will have their fees printed on the actual vehicle, so there won’t be any surprises.

2. Knowledge of the park and its surroundings is crucial. Most of the guys you see driving the unregistered pedicabs kind of make it up as they go along. This was told to us by our driver. However, while we were checking out a landmark (one that I actually knew something about) another pedicab pulled up. The cab was all ratty and didn’t have the fees are written anywhere, nor the name of a company. But that was beside the fact, the guy was spewing off info that simply didn’t make any sense and was blatantly a lie. It wasn’t a huge one that would destroy the tourist’s lives forever. But nonetheless, they were being fed wrong info for a tour they are probably paying top dollar for.

3. Entertaining – Our guides, one was the actual owner  – Theodor, and Victor was great. First of all, remember we were traveling with kids three and nine years old, to keep them entertained takes a lot. They never once got bored. And these guys had to pedal us while keeping us either enthralled or laughing.

Recommended Post: Family Friendly Things to do in New York 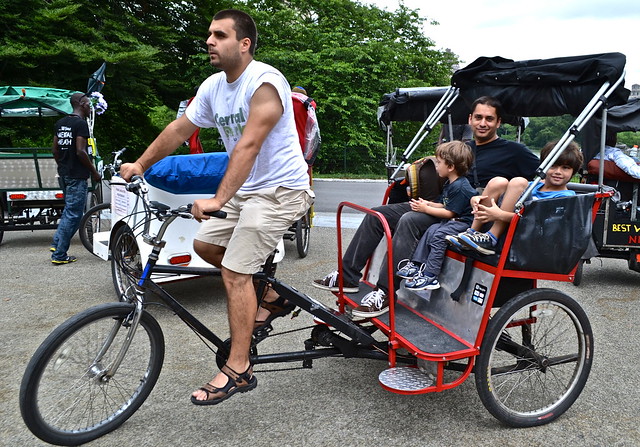 I also want to say Victor not only knew all you can possibly know about Central Park, but he had such love and passion for it. Me and my husband got a feeling that he would be doing this for free, for the pure love of it.

4. Stops and Sights – Central Park is enormous. There are actually different tour durations you can choose. We decided to do the one-hour tour because we had no idea how our kids would respond to it. And were super grateful when they guys gave us almost two hours. However, if I can do it again, I would probably go for three hours.

We got to see the main points and had a couple of stops for the kids to run around and to enjoy things you simply couldn’t see up close. But I would have loved to head further up north where the famous Shakespeare in the Park is put on every summer and other less-visited parts.