Paella Cooking Class – Fresh from the Market to the Kitchen, Valencia Spain 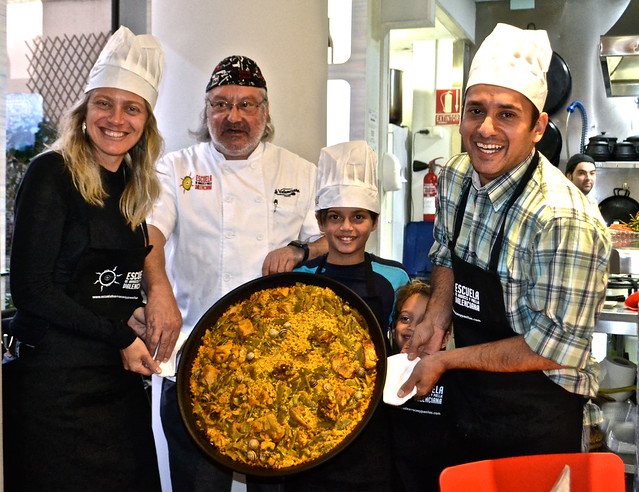 Visiting Valencia and not having Paella is like going to Italy and not eating Pasta.

However, Paella isn’t just a meal to be had while visiting this gorgeous, historic city. Paella is an experience. And the best way to fully understand the intricacies of it is via cooking class.

Working with Valencia Tourism, Maximo, recommended the School of Rice and Paella (Escuela de Arroces y Paellas) as a good way to not only learn about the Paella, but to also enjoy the largest Central Market in Europe and follow in the footsteps of what renown chefs do daily preparing this magnificent dish in Valencia center. 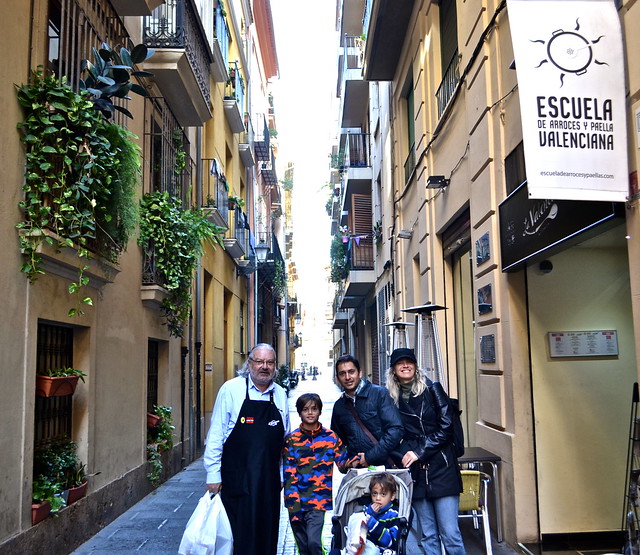 Paella Cooking Class – Much More than Inside a Kitchen

10 am my family and I arrived to Valencia’s largest produce, meat and fish market. We met with our teacher and well known chef – Jamie. Before the choosing of fresh ingredients began, Jamie, gave us a short history orientation about the market. 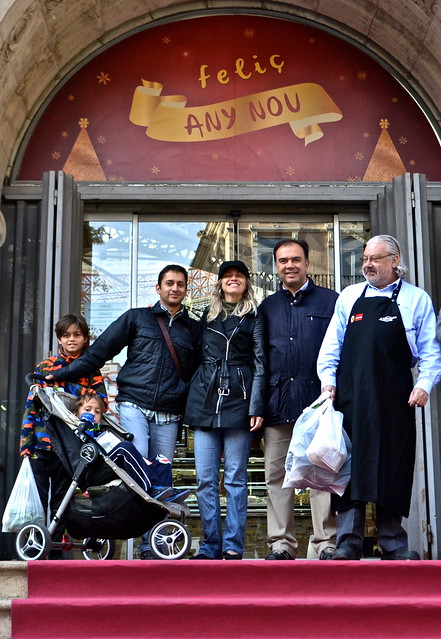 1. 1914 was technically the first stone that was placed – however the vendors were meeting since 1344.

2. Decision to build – due to weather conditions the vendors in the turn of the 20th century decided it was time to work together and build an indoor marketplace

3. 1400 vendors all put in money and the building began

5. Vendors today – During the years the vendors sold off their portions, or bought out others. Now there are 400 in total.

6. Health Requirements – the market has one of the strictest requirements for cleanliness and order. If any are violate the vendors must close and pay a fine until they are checked again

7. Marketplace halls – The market has two halls: the produce and meat section. This place is open six days a week..

The fish section – this hall is open five days a week.

8. Fun Fact #1: Spaniards are the second biggest seafood eaters in the world (Japan is first).

9. Fun Fact # 2: If you look on top of the market outside you will see a parrot ornament. The reason for the parrot it is said that when women haggle they sound like annoying parrots. (In my opinion – men sound worse).

Choosing the Ingredients for Paella

I love reading about different successful people. And one thing I’ve read over and over again, when it comes to chefs, that the best chefs usually spend most of their mornings choosing the freshest ingredients for their restaurants.

We got to do the same today. Even though this is part of the school experience, this is what Jaime does daily for his restaurant as well. 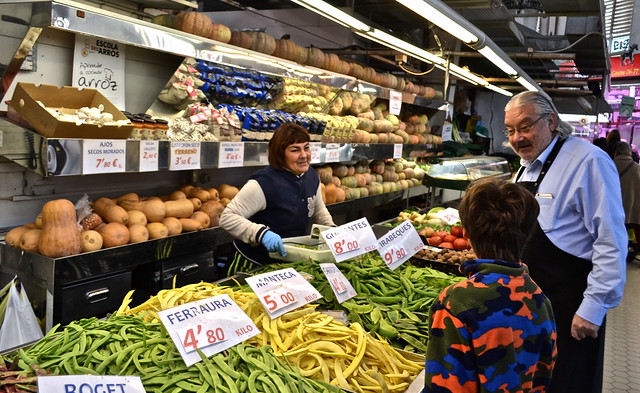 We started with the first ingredients and worked our way around the market until everything was bought and we were ready to cook. 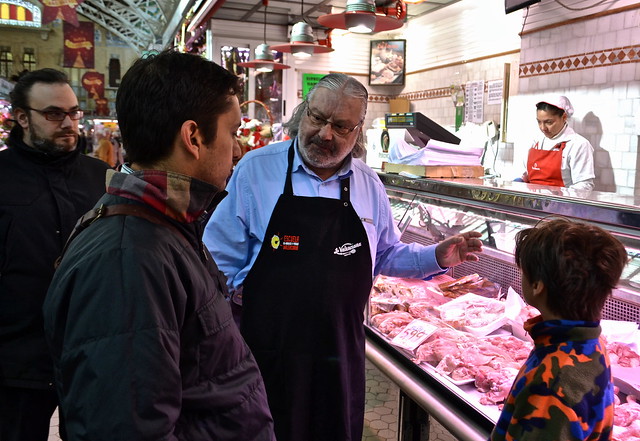 Part of the activity was to walk through the lovely, pedestrian, windy streets of historic Valencia center to the Restaurant – La Valenciana.

During the morning hours it is a cooking school. Then lunch is served to the students and also customers (but their food is made by the actual cooks of the restaurant). Then it is a second round of school since it is common for most restaurants to shut down between 3 – 7 pm. And finally the dinner session.

Paella Cooking Class – A Must Do for the Family

Before arriving to Spain I wanted to do a few things more than any others. Learning how to cook Paella was number one on my list and standing in this authentic Valenciano kitchen, working side by side with true Valencia chef, truly felt like I was living a dream.

And what was the best part, my family was loving it as much as I was. 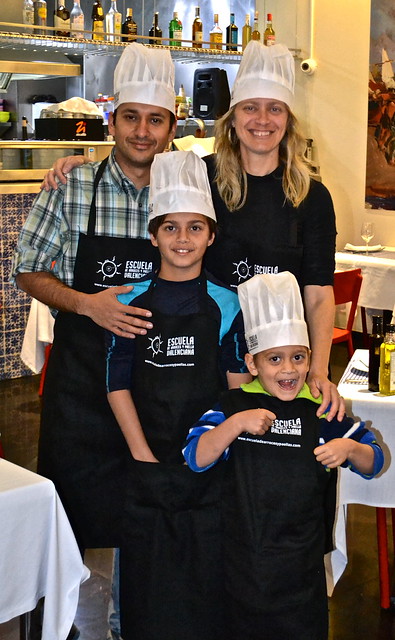 My 11 year old was fully immersed in the cooking process. Due to the kitchen being a little small and hot, my five year old watched from the sidelines, but super close to us so that I was able to involve him by telling him what we were doing to keep him as part of the team. 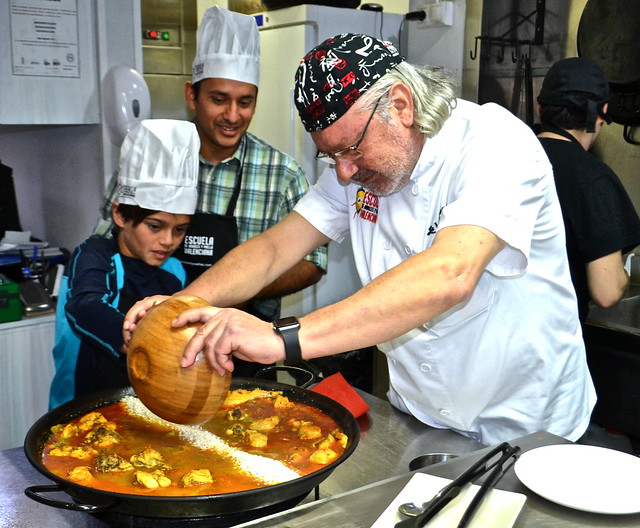 It took around 45 minutes for the first process of the cooking to take form.

Then we had almost 45 minutes for the broth (the most important part) to seep into the rice before we were able to eat it. 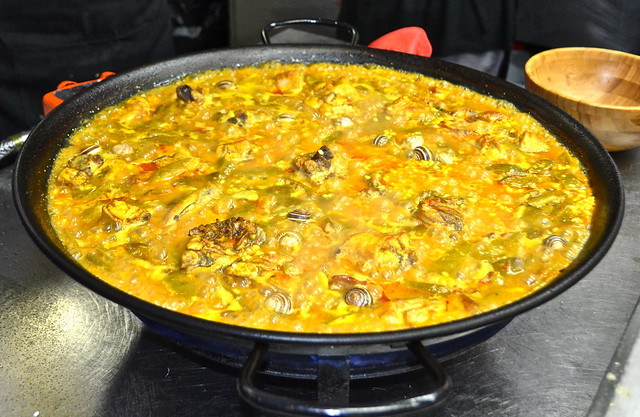 Since these 45 minutes don’t require any action, you get to start off with tapas (that’s what we were told by the chef and his assistants).

Let me tell you, just the tapas alone filled us up. And they were delicious. And of course we got plenty of wine and beer as part of the package. 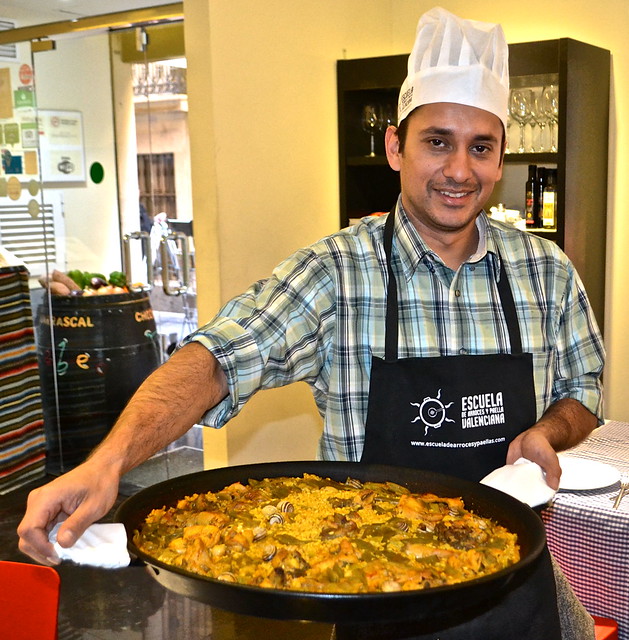 Even though we thought we were full, once the Paella was ready and presented, if you can believe it, we ended up eating almost all of it. And still had room for dessert.

And the most part was getting our diplomas (a great way to end the class). 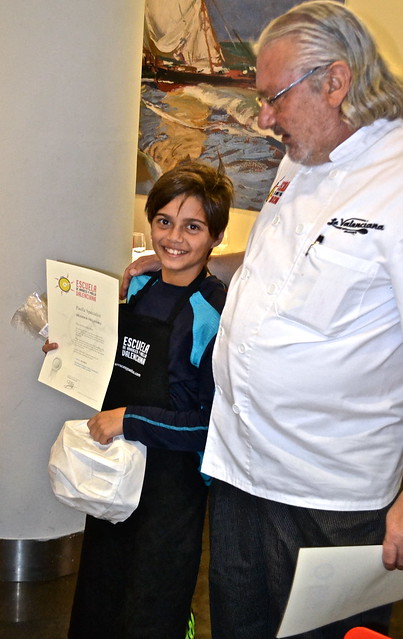 This was by far one of the most entertaining, educational and fun experiences we had. I would have liked it more for my five year old to be as involved as my 11 year old, but he still ended up having a blast.

Information for Visiting the School of Arroces and Paellas 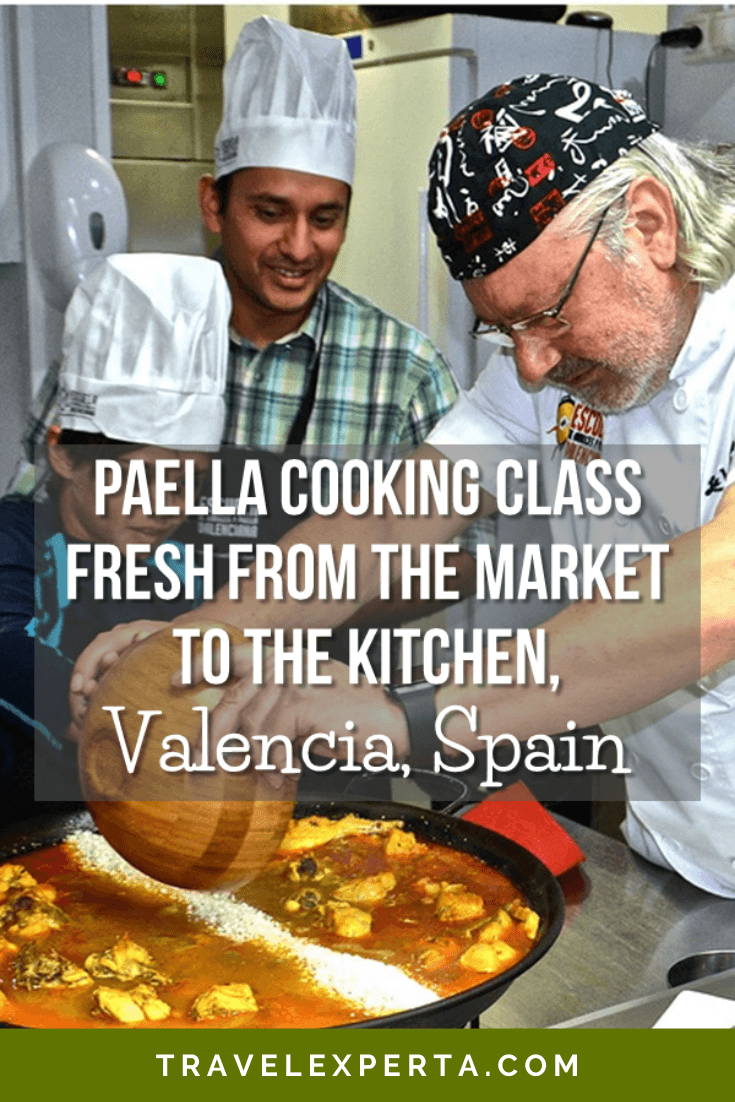 One thought on “Paella Cooking Class – Fresh from the Market to the Kitchen, Valencia Spain”