Outdoor Cooking Traditions Around the World

Have you ever tried outdoor cooking? It can be challenging at first, but also a lot of fun if you have the right knowledge and skill set. Though a bit stressful as you struggle with the recipes and maintaining the right temperature over an open fire, it also requires creativity and adaptability.

If you’ve ever wondered how cooking started, it started with man’s natural survival instinct. The primitive humans roasted meats and did basic cooking using the accessible natural tools they could find. Cooking has evolved over the years in many cultures, and this has given uniqueness and “beauty” to the taste of food in different societies. 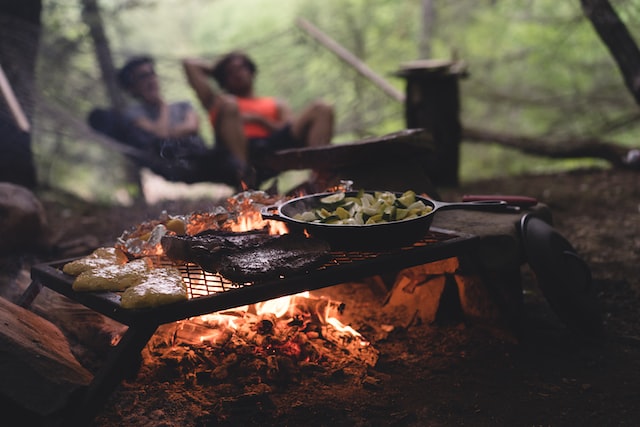 Outdoor cooking can be an economical form of traditional cooking. Each technique is distinctive and represents the traditional cuisine of the culture in which it is used. Also, outdoor cooking is a tip for keeping homes cool, fireproof, and stocked up in hot weather without having to make an indoor fire.

The knowledge of outdoor cooking adds to your culinary skills. However, for some, it is a way of life. For instance, gas is still considered a luxury, and electricity is still in short supply in some areas of Asia and Africa. Despite the distribution of clean cooking stoves through global programs, there are disrupted supply networks that do not reach rural regions. In fact, many homes in underdeveloped nations cook outside.

Outdoor cooking is widespread in various areas of the world since it can be commercialized — some people set up their kitchens in the marketplace or by the side of the road and sell food for money. In these cases, the right campfire cooking kit can be tool of the trade. Continue reading for detailed knowledge of outdoor cooking traditions around the world.

North America is one of the continents where charcoal and gas grills are most often used. Lighting up the grill and grilling some meat has a particularly nationalistic feel for Americans.

It’s no surprise that America is the world leader in outdoor cooking, including lobster boils, BBQs, and smoked oysters. There is no “American Style” of BBQ because it is a mixture of many different cultures and customs, from German to Pacific Islander. Since people began to come to America, this impact has spread throughout its cities, state, and islands. States like California have a long history of grilling foods, including oysters, poultry, and fresh seafood.

Texas style is unique because they have their own unique set of techniques for BBQ and outdoor cooking. This has to do with the South, Mexico, and the Southwest—the regions Texas interacts with frequently. Unique regional impacts depend on what area or city of Texas you’re in.

Also, Texas has long been a cow state with lots of meat. In Texas, most barbecued meats are beef, unlike most other areas where pork is preferred. As for Canadians, the warmer season gives room for more backyard barbecues. It would not be easy to find anything more emblematic of summer than waiting patiently with a bun in hand for your burger to be sandwiched.

Although both countries have a gaucho tradition of grilling meat, they still compete significantly. The Brazilian churrasco may surpass the Asado in terms of popularity on a global scale. Churrascaria, or barbecue restaurants, are expected in Brazil and worldwide.

They are frequently served in the all-you-can-eat rodizio style, where roaming servers will skewer various cuts of beef onto your dish for a set price. Grilled cuisine is famous in Argentina. Argentinian grilling is renowned for its thick crust and smoky flavor and is frequently prepared over an open charcoal flame in a sizable flat cast iron skillet. Although this approach typically necessitates several hours of grilling, The New York Times claims that Argentinian-style grilled beef yields “the ultimate steak.”

How about the Argentine Chapa hot plate barbecue? This style of fire cooking will come in handy for foodies and someone who wants to try something new with outdoor cooking. It offers unrivaled flavor and adds a unique element to your outdoor events, in case of ceremonies and hangouts, that will help you and your guests make unforgettable memories. This is a choice that will work for you, whether it’s in your backyard or other outdoor locations.

Grilling meat, vegetables, and noodles over a hibachi grill, literally translated as “fire bowl,” is one of the fundamental elements of Japanese cuisine. It is the primary cooking method in the numerous yakitori (and yaki-other-things) restaurants nationwide.

In the summer, crowds of hibachi-ers can be seen swarming into public parks, usually with one or two appointed grillmasters stoking the coals with a recyclable uchiwa (a rigid, long-handled oval fan, typically printed with ads and handed out on the street as promos). Irori, hibachi, robatayaki, yakiniku, sumibiyaki, and teppanyaki are just a few popular outdoor cooking techniques in Japan. The foundation of it is binchotan, a well-known Japanese oak charcoal that sears the outside of the meat while heating it from the inside with infrared radiation.

Ikan Bakar and Ayam Bakar, grilled fish, stingray, or chicken, are dishes popular in Malaysia, Singapore, and Indonesia. They are prepared on banana leaves and covered in a hot sambal. The Middle Eastern and Indian traders that influenced the development of kebabs also introduced the famous satays, which are closely related to kebabs and have a rich flavor from the use of spices.

In Korea, outdoor cooking is a way of life and might be the country’s biggest export. A Korean “gogigui” grills a variety of meats, including the well-known bulgogi as well as samgyeopsal (pork belly) and galbi (beef ribs) (side dishes).

There are different grilling schools in China. Also, there is chuanr, a dish that originated in the country’s northwestern province of Xinjiang and is now widespread throughout the region.

Chuanr consists of chunks of grilled, cumin-flavored meat (typically lamb). On the other hand, there is the rich Cantonese world of char siu, which you might have seen in its gloopy, bright-red “Chinese sparerib” appearance.

Char siu, which means “fork-roasted,” is more like a honey-coated, slow-cooked barbecue than a high-heated grilling served in restaurants. Also, making your own over an outdoor charcoal grill is a typical hangout pastime in Hong Kong. The most significant difference from an American BBQ is that you’re supposed to cook your meat, which makes it more like a fondue (complete with long forks) than a cookout overseen by a grill master. This is in addition to how the meal tastes because of the various sauces and marinades.

The popularity of outdoor cooking in the UK has increased more recently. Traditionally, the kitchen might become a gathering place for guests at parties, so bringing the festivities area outside to enjoy the warmer months is a good idea. Options range from a simple cooking area and service area to an outdoor kitchen with all the bells and whistles.

Geographically speaking, Turkey lies in the middle, yet the affection for the outdoor mangal (grill) goes from the Middle East to Russia.

Whether skewered or not, kebabs are the “dish du jour.” The most common meat is mutton, but beef, chicken, goat, and seafood are still widely consumed. All are served with a variety of meze and flatbreads.

Even when it’s cold enough outside for overcoats and beanies, grill fest fever grips Sweden from spring through summer. Pork sausages are a favorite, but salmon, shellfish, veggies, and flintastek, thick ham steaks cured in vinegar, are also very popular.

People from within and outside Quintanilla del Coco, a small town with 20 residents in northern Spain, assemble for mass at the chapel with outdoor cooking. The day is spent at the shrine cooking meat, drinking wine, and dancing to the music of a big orchestra. What about the actual grill? Nothing more than a few inches of ash and grates rise from the ground. Both are low-tech and quite efficient.

Tagine is another cooking method used in Morocco in addition to earthen ovens for outdoor cooking. A flat terra-cotta bottom and a conical-shaped lid made of the same material. This “top and bottom” is supported by a base known as a majmar, an unglazed brazier filled with hot embers that slowly cook the tagine.

Tagines of many kinds, including vegetarian, fish and potato, chicken with olives and lemon, lamb with prunes, and vegetarian, are very common in the area. This recipe has a delicious scent and is sure to impress.

The pleasure of outdoor cooking among South Africans cannot be overstated. They refer to a grill as a braai, which is Afrikaans for “grill” (the meat is referred to as braaivleis, “grilled meat”), and they not only have a National Braai Day on September 24 (the start of their spring) but there is also an official Braai Day Anthem that was recorded in 2011 and had a star-studded chorus akin to “We Are the World.”

The Pacific and New Zealand

Is there any other country that marks the voting day with a well-earned “democracy sausage” or celebrates its national holiday the same way it makes a weekend trip to the hardware store? Nothing could better capture Australian culture than to look at other nations with their lavish and solemn barbeque feasts and respond, “No, I’ll be fine with a sausage on bread and swimming in the pool, buddy.” The skill of grilling is also practiced underground in the Pacific islands and in the Maori culture of New Zealand. In the traditional hangi (NZ), lovo (Fiji), and umu (Samoa) cooking methods, the meat roasts, steams, and pressure cooks for a distinct flavor.

The famed campground at the Basin at the Ku-ring-gai Chase National Park is still another preferred option among residents and visitors alike, not just because of its large picnic and BBQ sites with nice views and a set of well-kept grill facilities all around. For outdoor cooking, The Basin provides free use of its gas and electric barbecue facilities; if you prefer a wood grill, they also offer firewood to go with it.

Everyone can enjoy various activities at the Basin, including swimming, hiking, and water sports. You can stay at the campgrounds close by if you wish to turn your BBQ into a camping excursion. It’s one of Sydney’s top locations for outdoor activities, animal viewing, and grilling. Brisbane, which has beautiful coastline vistas, gardens, and beaches, won’t fall behind also when it comes to barbecues. Families may physically unwind here by setting up a lawn chair, grabbing a few tall cans, and having a barbecue in the cool, shaded picnic areas that relieve the oppressive Brisbane heat.

Speaking of survival, these techniques can really come in handy in challenging situations or, perhaps, regular outdoor hangouts where you choose to cook using traditional methods.

Make sure you go through and grab some basic traditional outdoor cooking instincts; you can never tell when the knowledge will be useful!