NYC Pizza – This in Itself is an Adventure

NYC Pizza – This in Itself is an Adventure 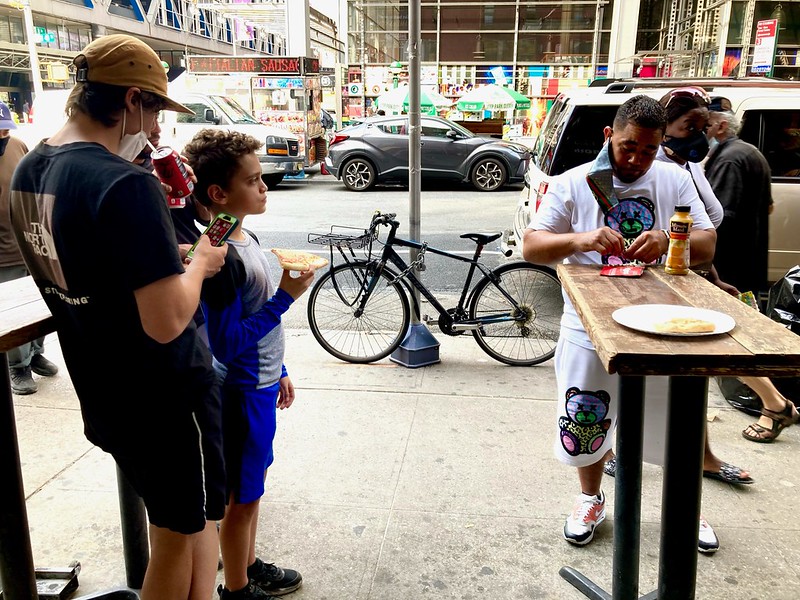 I have to say, I have now traveled quite extensively. It’s definitely by far the best pizza I have ever had. Whenever we go and visit my parents, they live right now in New Jersey. They’ve lived in New York City, in Manhattan. We always make sure with our family, with me, my husband, and my sons to go and get a slice of New York pizza.

It could be either in a cool New York City pizza joint or one of those little holes in the walls. And they even have those pizzas where it’s like a dollar a pizza. I mean, some crazy, ridiculous offer, but you have to go and do it. So the interesting thing, the last time we were in New York was after marijuana was legalized.

We found a great pizza spot next to the Port Authority.

Yes, I know. The 42nd street today is like Disney World and like a mini Vegas-looking thing with all the flashing lights. I remember back in the 80s and early 90s when it was drug central, hookers, prostitutes, and places that you did not go. And today, 42nd street is literally Disney. I think like two of Disney’s Broadway shows are located on 42nd Street, and Port Authority, which is the main bus terminal, is at the end of it on 8th and 9th Avenue.

However, the gritty areas still do exist where you can find those cool little holes-in-the-wall pizza joints and other places literally, like around the corner, maybe on 41st street or even 40th street. So when we went to visit my parents after Covet and when marijuana is already legalized, I’m not even going to go into that whole thing. But here we are.

We found this really cool pizza joint. We’re all hungry.

And the pizza slices are big enough to really fill you up. This place didn’t even have seats. You had to stand outside on these little tables, and the tables literally went out onto the sidewalk. And so we’re hanging out, having a pizza with our powdered garlic and those red flakes peppers. And at our table, which is really obvious that we’re standing there eating from it. 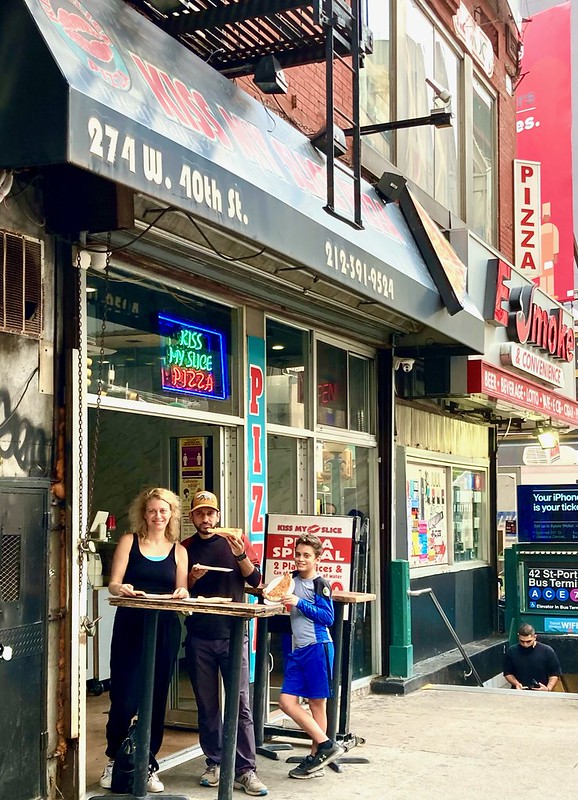 All of a sudden, this guy comes over and just rips out his bag of marijuana, takes out his rolling paper, and just starts to roll a blunt right in front of us. I mean, this whole legalizing marijuana just because it’s legal doesn’t mean that you have to be in your face weird about it. We have no problem with marijuana. I have no objection to it. But it’s just weird when you know that you’re sitting there eating the pizza.

So anyway, my kids got a total blasting kick out of it. So for us, it was that much more fun. But you know what you never know what you’re going to get when you’re going to go for a pizza in New York City. So whenever you hit New York talk about a cheap awesome thing to do, going for a piece of pizza. You can have a whole adventure for less than $15 for an entire family.