Visiting the Ivy League in Massachusetts: Colleges and Universities in Cambridge

Visiting Cambridge Massachusetts is much more than a stroll around the quaint streets and the banks of Charles river. It’s walking along in historic times along with the brightest minds of the US, and the world. This time we visited Ivy League schools in Massachusetts.

I have to gloat a little. My baby brother five years ago had a dilemma: he had to decide which University to get his PhD in on a full scholarship – MIT or Harvard. Not sure where I got my DNA from, since I barely made it out of school with a C average. But this was what his issue was, not a bad problem to have.

He chose MIT, since he was a Satellite and Communication Engineer major. This year he graduated. We got a grand tour of MIT, but enjoyed an evening at Harvard as well.

Applications for graduate study were received from 22,588 candidates.

Admission was offered to 3,504 candidates

Harvard University is open to the public. Anyone can come on in and enjoy the historic grounds and the original buildings and park, along with all the new additions.

Harvard rejects literally hundreds of candidates with 1400-plus SAT scores and 4.0 GPA’s in favor of students with lesser academic achievements.  The truly brilliant students are almost always admitted, but the other 90% of each class is comprised of students who meet a combination of factors.

What do you do after touring the two schools holding the brightest and innovative minds, it was time to get some eats.

Where to Eat After Touring the Ivy Leagues Schools in MA

How about the hipster hang-out and delicious restaurant – Friendly Toast. 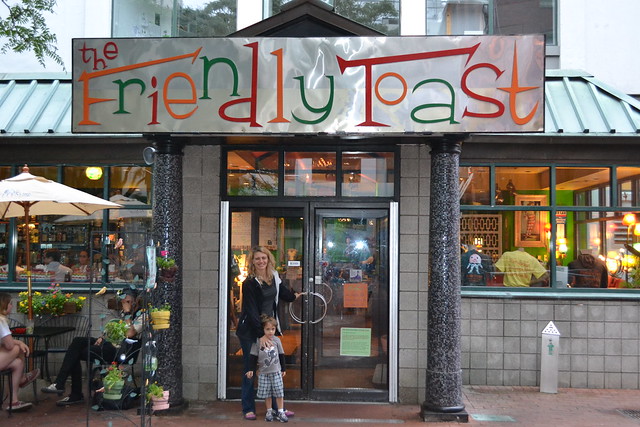 This is the place to be when chilling, living and studying in Cambridge, MA.

When you first enter the place, it looks like a vintage, 1950’s diner with a bar area at the entrance and a huge eating area towards the back.

Hipsters seem to be the only ones permitted to work here. With cool tattoos and dreadlocks, the waiter’s funky style definitely adds to the atmosphere.

The Friendly Toast restaurant is best known for breakfast, and you can order it all day long. Which was the consensus at our table.

However, they serve up other tasty dishes as well.

My Take On Ivy League Schools in Massachusetts

6 thoughts on “Visiting the Ivy League in Massachusetts: Colleges and Universities in Cambridge”