Growing up and living in New York City makes you overlook certain attractions or simply put them on your list of I’ll-do-it-one-day. Until the time has come to move away from New York and some of those attractions never happen.

Intrepid Sea, Air & Space Museum was that one big attraction for me. Every time I drove on the Henry Hudson River Parkway I would look at the huge navy ship and be in awe of it and remind myself I need to visit this historical monument. 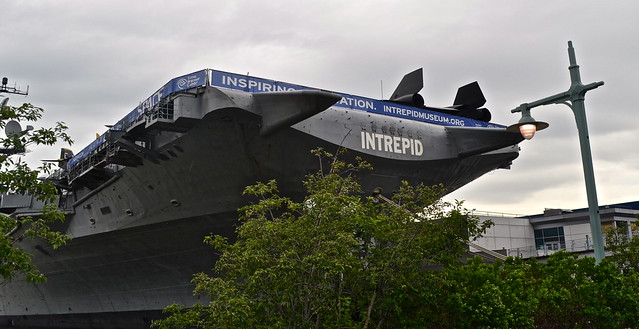 Twelve years later, I finally got a chance to explore it. But best of all, I did it with my family, and that was worth waiting for all along.

So if you are wondering what to do with kids in New York City, the Intrepid is a good addition.

Related Read: the met for kids

The day we arrived, it was raining. Everyone kept telling me that Intrepid is an outdoor museum and I need to come back. But with a restrictive schedule, we decided to just go for it. I mean, it’s summer, the rain is warm, and it wasn’t pouring. A little rain never hurt anyone.

1. Weather – yes, there are certain parts of the museum that are outdoors. For instance what you see outside the jets that are sitting on the top platform. However, I’d say more than 75% of the Intrepid is really inside.

Don’t let the weather hold you back. We’re glad it didn’t stop us.

2. Exhibits – The boat is a historical monument and at one point was one of the greatest navy ships of all time during three wars. Over 6000 men lived and fought on here.

Every inch of the boat has a story to tell.

Plus there are tons of fun things to visit and learn about – Submarines, Rocket ships, Jets, to planes, and the boat itself.

3. Tours and duration of your visit – Without doing any extra tours (paid or not) the whole tour will take about 1.5 hours. However, there are so many attractions and specialized tours that you should give yourself at least three hours if decide to sign up for any of the last minute.

All tours and activities are listed below.

4. Hands On – my boys are three and nine. They aren’t exactly at the age to stand around and listen to long-winded tours and explanations, which would be really interesting for me and my husband. But they were so into the hands-on portions of the tour. You can check out different jets.

Visit the control deck of the boat

And best of all, pretend to be the captain and navigate the boat

5. The Upper Deck – as I said earlier, even though the museum looks like it would be mainly outdoors, aside from looking at the cool jets, you can’t enter any of them or do much else. So you will be mainly spending your time on the second level, one level below the upper deck, or in the captain’s quarters, which is also indoors.

History and Fun Facts about the Intrepid

– General Admission – Access to Intrepid, Growler Submarine, and the film, Story of Intrepid.

Audio Tour Pricing – All audio tours include children’s content and history of the ship. Tours are available in the following languages: English, Spanish, Italian, French, Chinese, Japanese, and German.