9 Fun Facts About Vietnam You Should Know Before Visiting

Heading to Vietnam for the first time? Not so fast! Here are some fun facts about Vietnam you should know before taking to the skies. There are three times as many international tourists visiting Vietnam today as there were ten years ago. Even though Vietnam has quickly become a popular destination for travelers, there are many fun facts about Vietnam that people don’t know about.

Before you get on board your plane and take to the sky to visit some of the most beautiful places in Vietnam, you need to know the below facts about Vietnam to get the most out of your visit. 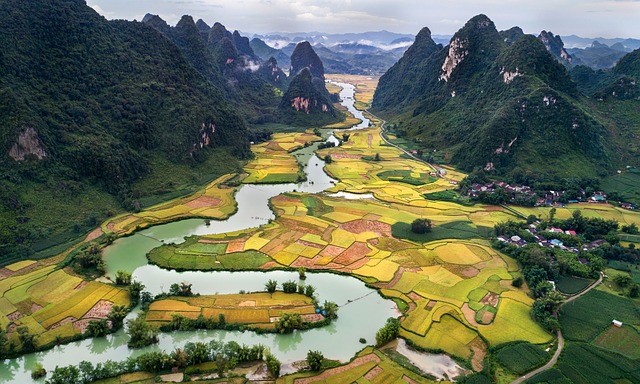 1. Everyone Gets Around by Motorbike

You have never experienced traffic like Vietnam’s largest cities. Ho Chi Minh City and Hanoi are famous for the number of motorbikes that pack the streets.

There are over 45 million registered motorbikes in Vietnam. In a country with a population of around 90 million, that’s one motorbike for every two people.

If you plan to walk around the city on foot, always look both ways before you cross the road. You’ll find that the locals are incredibly talented at whizzing around pedestrians anyway.

However, if you really want to explore the city like a local, you need to hire a motorbike yourself. But, remember that you should always wear a helmet and drive safely.

2. The National Dish is Called Pho

Have you ever tried Vietnamese cuisine before? You’ll quickly discover that Pho is a popular national dish which you need to try while you’re there.

You will find the dish everywhere in the country. It’s a type of noodle soup that is usually served with either beef or chicken. But, there are also vegetarian versions available.

It’s normally delicious, cheap, and satisfying! You could easily eat Pho as one of your regular meals during your adventure around Vietnam.

3. The Second Biggest Producer of Coffee

Which countries do you think of when you hear coffee production? You probably imagine Kenya, Colombia, and Brazil as the giants of coffee.

And yet, Vietnam is actually the second-biggest coffee producer in the world. They comprise more than 20 percent of the world’s coffee.

You have probably noticed Vietnamese coffee in the store at home. However, thankfully, they don’t sell all of the beans abroad.

You can get your hands on a serious cup of Joe in the country as well. Caffeine lovers should definitely sample the traditional style of coffee.

There is also the famous egg coffee which you can only find in the capital city of Hanoi. This isn’t for everyone!

4. Vietnam has the 16th Richest Biodiversity in the World

If you want to experience wildlife for yourself, Vietnam is an excellent choice of destination.

The country has one of the richest biodiversity in the world. You can find so many incredible creatures here.

From Asian Elephants and Slow Lorises to Tigers and Dolphins. You can catch a glimpse of many of these incredible creatures on one of the many tours available.

5. Vietnam is Home to the World’s Biggest Cave

If you travel to Halong Bay you can discover some of the most enchanting caves in the world.

However, you won’t find the biggest cave in the country’s most popular coastline. Head to the middle of the country to discover the world’s largest cave.

Hang Son Doong Cave is surrounded by beautiful mountains and forests. You can venture up to 5 miles into the cave. The cave is also over 150 meters deep.

Go with a tour guide and make sure you take your flashlight to explore the inside of the cave. There are so many amazing places to visit in Vietnam. But, you should certainly make the world’s biggest cave one of them.

6. Vietnam is One of the World’s Fastest-Growing Economies

The Vietnamese economy is growing at a rate of around 5 percent per year.

Of course, many people in the country still live in poverty. However, there have been significant improvements to the standard of living for most people in recent years.

There is also a growing number of middle-class Vietnamese who are demanding the same lifestyles of people in the developed world.

This is a vibrant country where change is constantly happening. That makes the nation an exciting place to experience while you’re there.

You may have experienced a Punch and Judy puppet show before. While you could have also seen a show performed on water previously.

You can learn folk tales about the people of Vietnam from the amazing puppet shows which are performed in Ho Chi Minh City and Hanoi.

The United States has George Washington and Abraham Lincoln. France has Napolean Bonaparte and Joan of Arc. England has Winston Churchill and Henry VIII.

Every country has national heroes. And yet, in Vietnam, there is one hero than stands above all the rest.

Ho Chi Minh, known as Great Uncle Ho, is the founding father of Vietnam. You can even visit Uncle Ho and his mummified remains in Hanoi.

9. The Most Popular Vietnamese Name is Nguyen

The name is shared by up to 40 percent of the country’s population. That makes it much more popular than Smith in the United States.

Before you embark on your adventure in this amazing country, it’s important to know a thing or two about Vietnam. When you get offered a bowl of Pho or get introduced to a guy named Nguyen, now you’ll know a little more than you did before.

If you want more fun facts about Vietnam and other destinations, check out our website for much more.