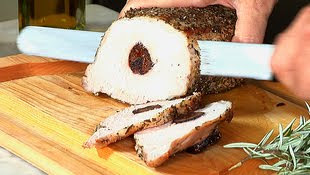 A top notch recipe, that deserves to be made.

Spice up the lomito with all the ingredients, it better if you do it long time before you cook it so it’ll have a stronger flavor.

In a bowl, fry the bacon, add leeks, jam and soy sauce. Cut the lomito in a tunnel form, from one side to the other then introduce the previous preparation (the filling). Save the extra filling for the sauce. In a big bowl fry the lomito in olive oil. Then cut it into slices and put the slices in a pyrex.

In the same bowl fry the lomito and the leeks with the garlic. Then add the mushrooms, the extra stuffing, oregano, and pepper, flour dissolved in water, beef soup and soy sauce. When it starts to boil add the wine. Remove from the heat and pour the sauce on the lomito slices or serve it in a sauce bowl. A good option is to accompany it with a drink like the Costa Rican frescos.

Don’t forget to check out more fun foods and recipes at Wanderfood Wednesday.