10 Facts to Learn About Silky Anteaters in Costa Rica

Not many of us know about the silky anteater. These guys live in a range from Southern Mexico to Brazil. In Costa Rica they can be seen in Corcovado National Park This is your chance to get to know some of the best facts about Silky Anteaters.

Costa Rica is one of the best places for wildlife travelers, it has a diverse ecosystem full of national parks and protected areas. In fact, the silky anteaters are just one of the most diverse animals you can spot in Costa Rica. An amazing place with wonderful animals that suit perfectly for eco-friendly travels to do some wildlife watching. 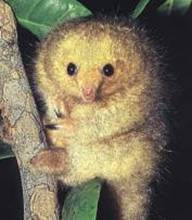 1. Silky anteaters are the smallest anteater species in the world. They have a total length ranging from 3.6 to 4.5 cm and usually weigh less than 0.88 pounds.

2. They have a dense and soft golden brown fur, short snout, partially prehensile tail, and two enlarged claws in each forepaw.

3. The Silky Anteater is a slow-moving animal and feeds mainly on ants, between 100 and, 8000 a day. Sometimes it can also feed on other insects, such as termites and small beetles.

5. It is a nocturnal, arboreal, and solitary mammal. During the day, they typically sleep curled up in a ball in some tree branch. 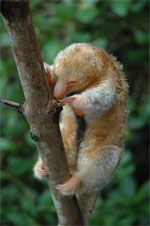 8. Silky anteateaters are a relatively stable species, but they are being negatively affected by how fast their habitat is being destructed.

10. Silky anteaters can be found in lowland rain forests with continuous canopy, where they can move to different places without the need to descend from trees.