Boa Constrictors live in Central & South America and some islands in the Caribbean. Boa constrictor’s habitat varies widely depending on environmental conditions, from tropical rainforests to arid semidesert countries. In Costa Rica, it can be seen in Corcovado National Park. This dangerous, yet fascinating reptile is waiting for you to solve its mysteries.

Costa Rica is a rich country with a huge national park system and many protected green areas, which makes Costa Rica a great wildlife destination. The diversity here is not a secret to anyone, animals in Costa Rica are abundant, making it a popular destination for bird watchers and wildlife viewing.

If you’re planning to head to this amazing country, make sure to plan an eco-friendly trip. 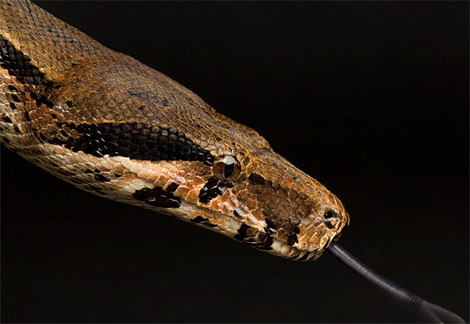 1. The Boa constrictor is a large, heavy-bodied species of snake that strangles its prey instead of using venom.

2. The coloring of Boa constrictors can vary greatly depending on where they live, however they are generally brown, grey, or cream with a brown or reddish-brown pattern that becomes more pronounced towards the tail.

3. Their diet consists of rodents, but larger lizards and mammals as big as ocelots are also reported to have been consumed by these.

4. Boa constrictors are ambush predators, as such, they will often lie in wait for an appropriate prey to come along. The boa will first strike at the prey, grabbing it with its teeth, it then proceeds to constrict the prey until death before consuming it whole. It will take the snake approximately 4-6 days to fully digest the food.

5. Boas can reach lengths of anywhere from 1-4 meters. Females are generally larger, in both length and girth, than males.

6. In some regions Boa constrictor numbers have decreased by predation from humans and other animals. However, most populations are not under threat of immediate extinction.

7. Some South Americans keep boas in their houses to control rat infestations.

One thought on “7 Facts about Boa Constrictors in Costa Rica”