One of the things why people visit this country is for Eco vacations where you can explore the forests and jungles, searching for the exotic wildlife of Guatemala. But where is the best place to do this? Well there are many national parks and reserves that you can visit.

Here a few parks and reserves that you can visit for Eco Vacations in Guatemala:

The Cloud Forest Biological Corridor (Corredor Biológico del Bosque Nuboso) is a relatively new creation that encompasses a forested area bisecting the Biotopo Mario Dary Rivera and Sierra de Las Minas Biosphere Reserve. Its purpose is to provide an uninterrupted biological corridor for many species of animals living in these protected cloud forests.

The corridor covers 28,640 hectares and includes nine communities and eight private reserves. A number of these private reserves are part of local hotels and restaurants that have begun catering to visitors interested in exploring all that this exuberant highland forest ecosystem has to offer. The result is an emerging ecotourism development area, which may serve as a model for other areas in Guatemala with roads adjacent to protected areas.

There are several kilometers of nature trails, horseback riding, and inner tubing to keep you busy should you not want to just relax and unwind. The best of the cabins are set along the creek and there are plans for smaller cabins catering to independent travelers or people on vacation in Guatemala in the works. The restaurant here does barbecued meats and has some delicious smoothies you can enjoy in an open-air patio. 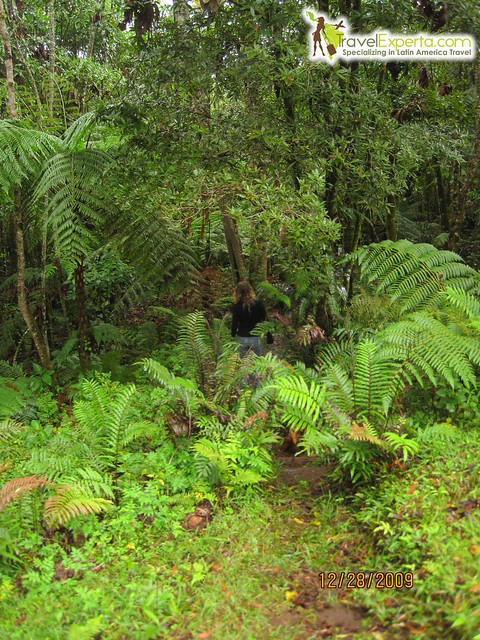 The Sierra de las Minas is a vast, 242,642-hectare mountain park harboring an astounding diversity of plant and animal life and encompassing a motley assortment of ecosystems, including cloud forests harboring several species of endemic conifers, as well as tropical moist forests and rainforests.

The park extends 130 kilometers eastward (it is 30 kilometers wide) into the neighboring department of Izabal, where it meets with the lowland forests and grasslands of the Río Polochic delta. The biosphere reserve ranges in elevation from 400 to 2,400 meters and is composed mainly of cloud forests throughout its mountainous core in Baja Verapaz.

Sixty-two permanent streams have their source in the upper slopes of the biosphere reserve, making it an important watershed supplying the Motagua and Polochic Rivers. It is home to healthy populations of quetzals and jaguars, among other exotic species. Together with the adjacent Bocas del Polochic Wildlife Refuge, the parks account for 80 percent of Guatemala’s biodiversity.

The biosphere reserve is privately administered by Defensores de la Naturaleza, a well-known local conservation group with ties to The Nature Conservancy, among others.

In any case, the Chilascó falls are certainly one of the region’s highest and are well worth a visit. They can be reached via an excellent trail in about 1.25 hours. From the tourist information center in town (where you pay a $2 admission fee), it’s two kilometers to a parking lot and the trailhead. It’s another three kilometers from there to the falls.

You’ll be treated to wonderful vistas along the way and to an opportunity to see the gradual progression from agricultural fields dotted with potato, broccoli, and cabbage patches to dense cloud forest with wonderful bromeliads, orchids, and ferns. There are two lookout points from where there are fantastic views of the spectacular waterfall.

This is only part one. There are many more places in Guatemala that you can visit. So stay tuned for the next one!

One thought on “Eco Vacations in Guatemala – Parks and Reserves #1”