15 Things to Do in Drake Bay: Beaches, Parks, and Waterfalls

Drake Bay in Costa Rica is one of the most secluded places in the country. It is located on the northern tip of the Osa Peninsula and it’s home to the famous and incredibly bio-diverse Corcovado National Park. Until some years ago, it could only be accessed by boat or plane. Now there are some roads, but they are flooded almost all year. So, nature lovers, this is the place for you! This makes it a great place for travelers looking to go off the beaten path. If you are thinking about things to do in Drake Bay, I got you covered. I have listed here all the things you can do in the are.

It is also great as headquarters for your adventures in the area. From here, the Cano Island Biological Reserve is just a few minutes away. It is also one of the most secluded areas in Costa Rica, with almost untouched forests. There are some eco-lodges in the area that offer great tours and packages in the middle of the forest where you will see tons of local animals. A place where you can enjoy:

Drake bay has the perfect tropical weather. It is warm year-round but it can get rainy. The best time of the year to visit Drake Bay is between December and April because they are the not so rainy months. 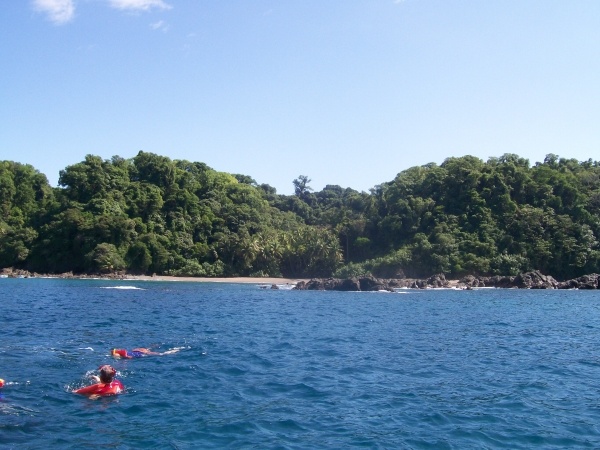 Things to Do in Drake Bay

Yes, this is also possible on the pacific coast of the country. There are diving tours leaving from its coast every morning, just make sure you choose a place that is PADI certified for your safety. There are many hotels offering diving packages too.

Cano Island is the hot spot for snorkeling and diving. Year-round warm water and good to excellent visibility make Cano Island worth the trek to get there. The best time to go is during the dry season, but it is usually decent all year long.

These ones leave mainly from Cano Island, just a few minutes on boat from Drake Bay. This is a marine park that you get to explore off of the island’s coast. Animals that you get to swim with are sea turtles, rays, and even some species of sharks. Depending on the season, you might even find whales and dolphins.

This amazing area, as well as most of the others in the country, has amazing zip lines that you can zip through the forest canopy. The best part is that the tours from the area go from a few minutes up to four hours for some of the most adventurous visitors looking for longer lines and the highest platforms.

The Original Canopy Tour: This is a short, but fun canopy tour. Includes 6 cables and 9 platforms.

There are at least two rivers where you can go exploring the mangroves near the beaches. There is also a nearby island called Violines where you can also have this experience. They are all slightly different. If you decide to go on this type of tour, try to be silent and listen closely to your guide, they usually point out the many animals hiding in the trees.

The Terraba Sierpe National Wetlands are nearby. Half-day or full-day tours can be arranged through most hotels. Kayaking tours of the mangroves are also available. Bird watching tours are especially good here during the migratory months. Monkeys (four species), sloths, anteaters, and other wildlife are often spotted in the park.

The beauty of sport fishing in Drake bay is that there is amazing fishing all year long due to the biodiversity and richness of the area. Both inshore and offshore fishing trips are available. Rooster, jacks, black tuna, and mackerel are popular inshore catches while sailfish, marlin, mahi-mahi, yellowfin tuna, and snapper are caught offshore.

There are at least two ways to enjoy this sort of tour. You can go to explore the jungle or take a romantic tour along the beach. I would recommend asking for a jungle tour during the afternoon s that you can end it at sunset with gorgeous views.

You need to do this if you are in the area between August and September. These are your regular boat tour off of the coast of Costa Rica but with the bonus of being able to see the playful dolphins swimming next to it. Whales also like to come close and give spectacles.

This area is a bird watcher’s paradise. Early morning and late afternoon tours are available. Due to the variety of vegetation types found in the Drake Bay area, the variety of birds encountered is astounding, so birding is an awesome option here.

Common sightings include toucans, hummingbirds, scarlet macaws, hawks, flycatchers, tanagers, euphonias, honeycreepers and antbirds. Tours usually last for two to three hours. The black-cheeked tanager is endemic to the Corcovado area and may also be sighted.

Full or half-day trips can be arranged for a wide variety of fitness levels, from easy to difficult. Swimming holes and dirt trails contribute to the fun. It is hilly in the Drake Bay area, so a reasonable level of fitness is required.

There is not much in the way of shopping in Drake Bay. There is a small gift shop located along the dirt road in front of the beach near where the road ends near the elementary school.

The Rio Agujitas is good for kayaking when the tide is high. The Rio Drake is a three-hour journey to the top through a mangrove forest. Only doable at high tide (½ low to ½ high). The Bay’s waters are calm enough to kayak in as well. Most hotels have kayaks for use.

The waters near Drake Bay boast “the longest season of humpback whales in the world, as they get migrations from both North and South America” (Delfin Amor). In all, over twenty-five species of dolphins and whales are either residents or pass through the area on migration.

One lodge, the Delfin Amor, specializes in dolphin and whale watching tours and has an onboard hydrophone and uses a flying rubber dingy as an ultra-light plane to find the pods to assure dolphin sightings.

Corcovado Expeditions offers catamaran trips aboard a 65-foot catamaran. Sunset cruises, Cano Island tours, and private charters are available, as are weddings aboard the catamaran.

The Drake Bay, Costa Rica, holds a Festival annually in April. It is a community-wide event, drawing residents of nearby villages and the lucky tourists who happen to be in town. Activities include volleyball, soccer, and various foods. Proceeds benefit Agujita’s schools, clinics, and other public facilities.

Things To Do Near Drake Bay 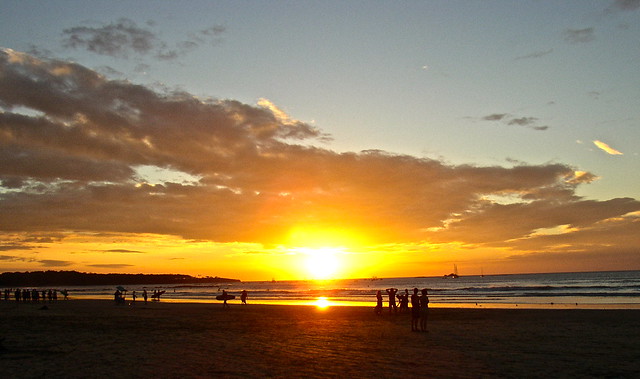 Jaco Beach, Costa Rica is 3 Kilometers of sandy beach, this popular spot is great for both novice and connoisseur surfers. Its year-round beach breaks and accessibility to other nearby surf spots make it a great home base. With some serious riptides, lifeguards man the towers during high season, even so, take caution when swimming in Jaco Beach.

Beautiful beach is the exact definition of Playa Hermosa, and it holds true. With wide gray sanded beaches and white surf, Playa Hermosa is not only known for its tranquility, but also for being the biggest beach break (after Dominical Beach) on the country’s Pacific Coast. The ten-kilometer beach is part of Playa Hermosa Wildlife Refuge. Experienced surfers from all around the globe gravitate to this place, still preserved from overdevelopment, to experience the incredible surf and see international surf contests. Beware, the riptide is strong and makes it hard to swim. This isn’t a place for little kids to play in the surf, even big kids need to be extra careful.

Playa Herradura is home to the only Marina (Los Suenos Marina) in Costa Rica (others are in development). Herradura means horse-shoe, and that’s exactly what is so special about this beach. Due to its shape, the waters are calm and swimming friendly. The beach is dotted with excellent seafood restaurants, and you can get a full-service sportfishing charter boat for big game fish: billfish, marlin, mahi-mahi, and tuna. Also, book snorkeling and dive trips that leave from here to nearby reefs and islands.

Not even half an hour north of Jaco you’ll find Playas Esterillos. These three peaceful, palm-fringed beaches: Esterillos Este, Centro and Oeste, have long stretches of coastline and pretty good waves for long rides. The strongest beach breaks of the 3 are Esterillos Centro and Este. They can ALMOST compare to Playa Hermosa. Swimmers can have their fun too, the northern end of Esterillos Oeste, is a calm tidal pool offering shelter from the area’s dangerous riptides.

Going southbound towards Quepos is Playa Bejuco. Here you will find raw, untouched coastal beauty. Wanna walk for miles and not see another soul, come to Bejuco. Another surf spot with the swimmers remaining at bay due to super strong riptides.

This island is between Jaco and Nicoya Peninsula with beautiful white sanded beaches and crystal clear waters. You can spot dolphins, turtles, and whales on your way over there.

With the increasing development in this region, Carara National Park has become a critical sanctuary for wildlife. A mix of the wet rainforest of the southern Pacific and the dry tropical forest of the northwest is home to over 2000 crocodiles, 450 scarlet macaws, and much much more. read more

Ten minutes south of Jaco is Playa Hermosa which is part of this wildlife refuge. July and December months are worth a trip to see the female Olive Ridleys (locally known as Tortuga Lora) come ashore to lay their eggs.

Have you seen a morpho butterfly flutter through the air? At the local butterfly farm and serpentarium you can see that and a lot more. (wishlist)

Do not miss this attraction! Rarely you are able to see firsthand one of the world’s largest populations of American crocodiles (over 2000!). This croc can grow as large as 12 feet from nose to tail. Make a pit stop at Tarcoles Bridge and check this creature out in the flesh when traveling from San Jose or Puntarenas. Another great way to see them is on boat tours of the river, which is also known for its rich avifauna, with over 120 birds living in its mangrove estuaries.

One of the tallest waterfalls in Costa Rica (600 feet) is right here! Only 35 minutes north of Jaco. Waterfall del Zorro Not far from Jaco is a 35 ft. Waterfall de la Gloria In the hillside of Playa Hermosa.

Out of all of the places to see in Costa Rica this is one of the best for anyone looking for untouched forests and deserted beaches. 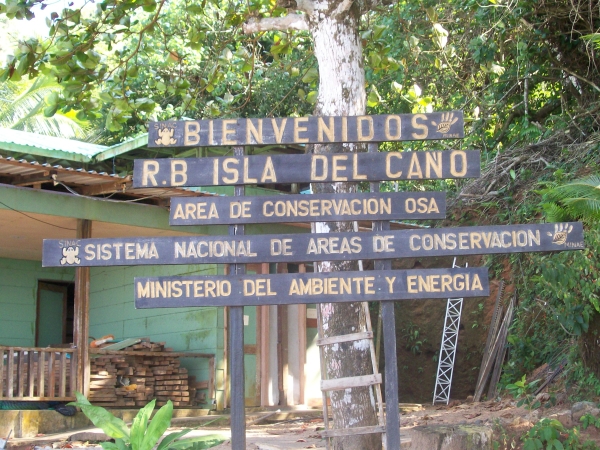 Fun Fact: It is believed to be the place where Sir Francis Drake (a British pirate) hid his treasures in the 16th century.

As I have mentioned before, there are many activities in Costa Rica for travelers, and Drake Bay is living proof of that. In this region, you won’t have time to get bored with all the tours available.

As you can see this is the best place for people looking for a private vacation filled with adventures in the middle of the Costa Rican Jungle. 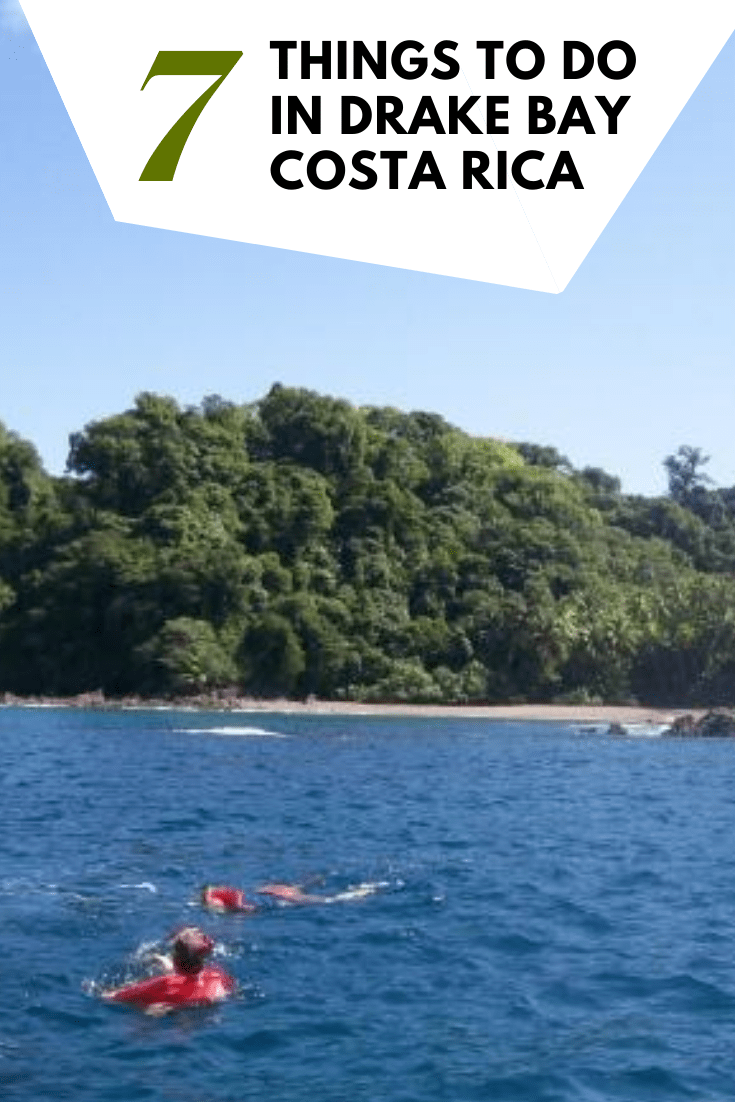