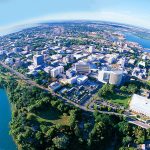 Darwin is a cosmopolitan, tropical city situated on the edge of the Arafura Sea in the Top End of the Northern Territory of Australia.It is the international gateway to Australia’s Top End and the beautiful National Parks of Litchfield and Kakadu. Cheap flights to Australia that allow you to travel to Darwin from around the world enhances its status as a true international city.It is a guide to traveling in to Darwin a cosmopolitan, tropical city on the edge of the Arafura sea,top end of the Northern Australia. 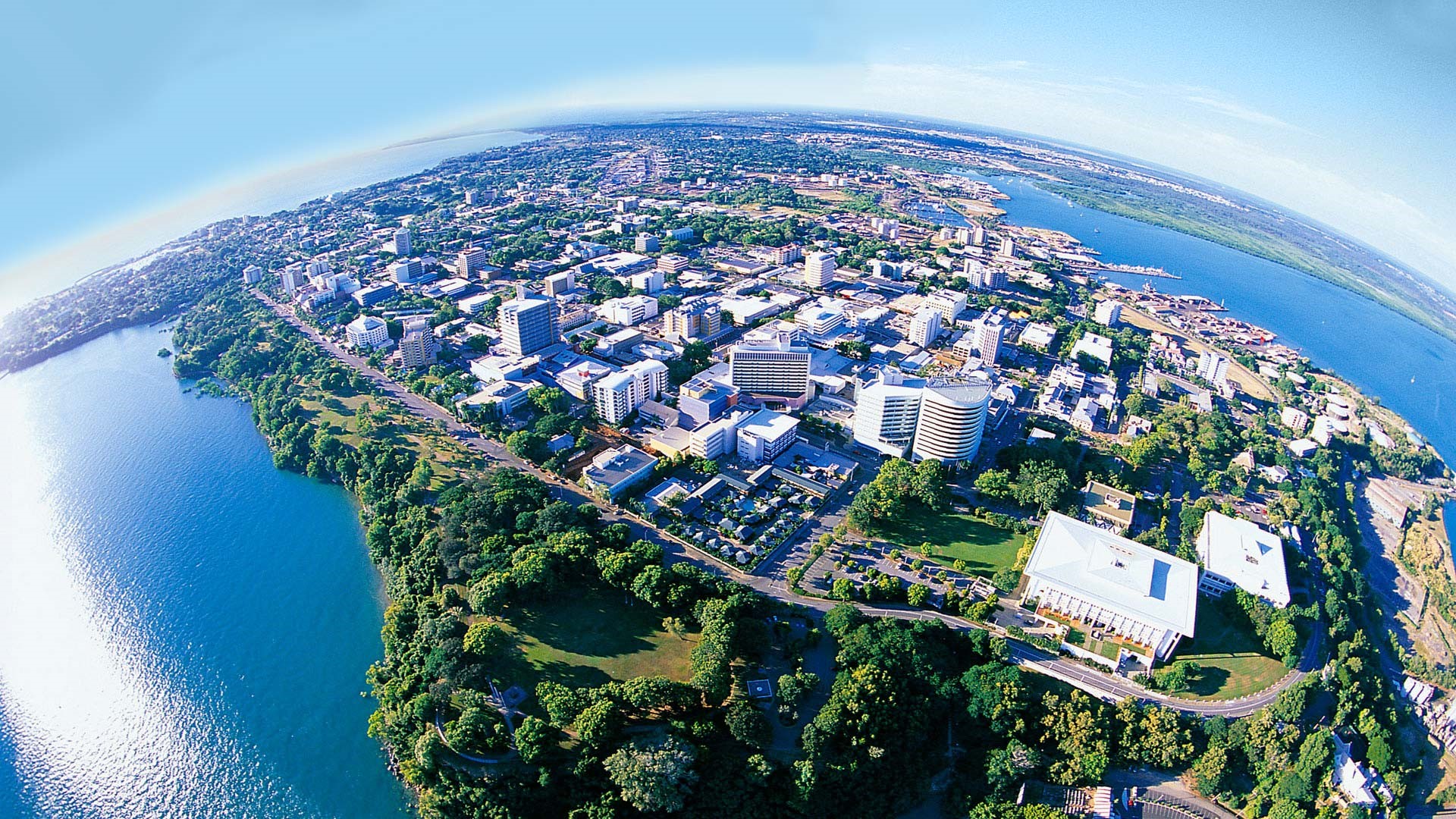 The atmosphere is laid back and Darwin city is the kind of place where you can take a cruise on the harbour, go diving, explore the museum and art gallery, go shopping or just enjoy the local scene of outdoor living, markets, live bands, walks along the beach and watching the sun set.

Darwin, the capital of Australia’s Northern Territory and the unofficial ‘capital’ of northern Australia, is closer to Jakarta than it is to Sydney and closer to Singapore than it is to Melbourne.

For this reason, as much as any other, Darwin looks outward to Asia as much as it looks inland to the rest of Australia.
This closeness and familiarity with Australia’s northern neighbors is reflected in the town’s relaxed, cosmopolitan, tropical atmosphere.

In Australia, a country that prides itself on its ethnic diversity, this may be the most multicultural city of all.
On Christmas Eve 1974 Darwin city was almost completely destroyed by Cyclone Tracy.

Of the city’s 11,000 houses, only 400 survived relatively intact and as a result the whole place had to be rebuilt and it is now well appointed and possessing most of the amenities expected of a much larger city.

Located on a peninsular with the sea on three sides it is a place that has never experienced winter, where the weather can best be described as hot or hotter.

Watching sunsets and storms are something of a local pastime, and after a cleansing rain shower you can almost hear things growing.

Aboriginals from this area divide the year into six seasons, but in Darwin people generally prefer to think in terms of the ‘wet’ and the ‘dry’.

The wet season begins in October, when humidity levels begin to climb, until by January and February the combination of heat and humidity can be quite stifling.

The end of the wet is characterized by the (sometimes very) fierce storms Aborigines call ‘knock ’em down storms’.
By contrast, the dry, (winter), is a delicious time of year, sunny and warm.

Modern Darwin is one of Australia’s most cosmopolitan cities; more open to Asia than perhaps any other Australian city.

It plays an important role as the front door to Australia’s northern region and as a center for administration and mining.

The completion in mid-2003 of a railway link to Alice Springs and Adelaide fueled hopes that Darwin could eventually become the continent’s transport hub with Southeast Asia.

A huge development of the city’s waterfront area was recently undertaken, with a new convention center, a large hotel, numerous cafes and restaurants, a wave lagoon and a public promenade scheduled for completion by 2008.

This park, which is a breeding complex, features hundreds of giant reptiles.

Tours include a feeding demonstration and a chance to cuddle? a baby croc.

A mini zoo houses lions and other big cats, spider monkeys, marmosets, tamarinds and large birds, including ostriches and cassowaries and a comprehensive museum covers all things crocodile related.

Or perhaps visit Darwin Crocodile Farm which is on the Stuart Highway, 35km south of the city.

When a croc is taken out of one of the Territory’s waterways, this is usually where it ends up.

Don’t imagine they’re here out of human charity, this is a farm and around 2000 of the animals are killed each year for their skins and meat.

Get here in the early afternoon for feeding time, if you can.

If crocs are not your thing then a visit to East Point Reserve on Alec Fong Lim Drive at Fannie Bay might be more to your liking.

This spit of undeveloped bushland north of Fannie Bay is good to visit in the late afternoon when the wallabies come out to feed.

A cool breeze usually springs up as you watch the sunset across the bay.

There’s also a salt water, jellyfish free lake where swimming is possible all year round.

If you’re into architecture and hot air then a visit to Australia’s newest Parliament House, opened in 1994, might be for you.

This beautiful building is a magnificent example of tropical architecture.

Guided tours depart from the foyer at 9.00am and 11.00am every Saturday and on Wednesdays at 10.30am; they last 90 minutes and they’re free.

You’ll find the foyer of Parliament House on the corner of Bennett Street and Mitchell Street; Darwin and bookings are essential.

Just a short trip from the City Center you can enjoy specialty shopping at Cullen Bay Marina.

Take a harbor ferry trip, relax with seaside and marina views whilst dining on the boardwalk at one of the many seafood restaurants or just sit back with a cocktail or cool drink and chew the fat with your friends or loved ones.

For those interested in the local flora, just two kilometers north of the city center you’ll find the Darwin Botanic Gardens, a beautiful 42-hectare display of tropical vegetation.

Located on Gardens Road, Darwin, there is also an entry on Geranium Street which is open 24 hours a day.

There are many sections in the gardens including a rain forest gully with hundreds of palm species, orchids, ferns, figs, a wetland, water fountain, information center, a coastal zone and a mangrove boardwalk.

The self-guided Aboriginal plant trail, which is open from 7am to 7pm daily, is well worth the stroll, you’ll find it fascinating.

The old Stokes Hill Wharf, just to the south of the city center, has been restored and is now home to some excellent al fresco dining and specialty shopping.

View, or buy, South Sea pearls, enjoy great sunsets and cool breezes, throw a line in and catch your own fish.
Whatever turns you on.

On the way stroll along the historic walking trails around Stokes Hill Wharf, visit survivors’ lookout, take an organized tour of the WWII Tunnels and steam pump house and learn about the bombing of Darwin.
Perhaps you might even like to take a helicopter joy flight.

Try one of our delicious jack fruit curries, sip a fresh mango smoothie, or sample some crocodile jerky at one of Darwin’s weekend markets.

Regular markets are located throughout the city, but the Mindil Beach Sunset Markets are perhaps the best known.

Operating every Thursday and Sunday evening between May and October, there are music and dance performances, art and craft stalls, and an eclectic mix of international dishes.

As I said there’s a multitude of things to see and do within easy reach of the city.

East point Reserve is a 200 hectare recreation area with walking and cycle tracks including a mangrove walking track that winds its way through a spectacular mangrove forest from the reserve through to Lake Alexander.

The old gaol with its crude facilities and a chilling old gallows section is a grim reminder of what life in the gaol was like.

Aquascene, voted the most popular attraction in tourism surveys is a must for any visitor to Darwin.

When the tides are high, hundreds of fish come to the shore’s edge in this pretty gully to be fed by hand.

Indo Pacific Marine is one of only four such exhibits in the world.

An air-conditioned bus tours the rows of stunning orchids while the farm’s owner gives a running commentary.

The tour entertains its passengers with a display of crocodile feeding where crocodiles have learned to jump out of the river for their supper.

So much to see and do:
The Darwin Crocodile Farm, the Windows on the Wetlands visitor center, the Darwin Wharf Precinct, the Cruise Ship Function Center, Gunn Alley Gold Mine, the Barramundi Fishing Park, the Lost City, the Deckchair Cinema….. the list just goes on and on.

Come to Darwin, be wonderfully surprised, and most of all…………..enjoy.
If you would like more information on how you can find low cost flights to Darwin, as well as any other city in Australia, visit Travangelo.co.uk, where you can find a huge number of flights from anywhere in the world.