The Crazy Cars of Cuba: Why Are Cars In Cuba Old?

A country full of salsa, sandwiches, sun, and sandy beaches, Cuba is an amazing holiday destination. You’ll have to tear yourself away from the beach, though, as no visit is complete without a trip to Havana. In the capital, you’ll find colorful people and even more colorful cars. Izzy, a globetrotting blogger from PassSmart.com, recently discovered the joys of Cuba and has plenty to say about the automotive past and present of the culture-soaked Caribbean island.

Related Read: Top 7 Fun Things To Do In Havana Cuba

Why Are Cars In Cuba Old?

When the first American car came to Cuba in the 1950s they had no idea how long they would be staying. The cars were new, embodied the light-hearted character of the decade, and were also driven on the American mainland.

The harmony, however, didn’t last. In 1962, strained relations over Cuba’s communist regime led to America placing a hold on any auto parts being shipped into Cuba. New cars were not available, and old cars couldn’t be repaired with new parts. 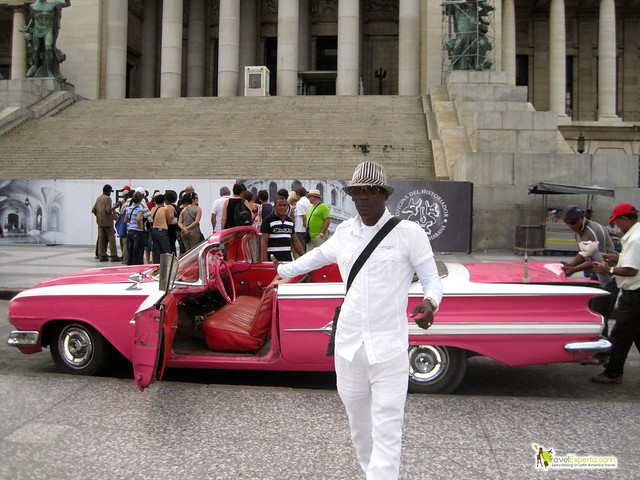 Today, Cuba’s automotive landscape hasn’t changed. In the cities you’ll find patched-up vintage cars still, unbelievably, running. The Cubans have developed ingenious car repair skills, not out of choice, but because they have to. Up until last year, Cuban law still stated that – although Asian and European cars could be imported – only cars built before the Cuban revolution in 1959, could be traded on the open market. Now, though, ordinary Cubans are able to buy post-revolution built cars from foreigners.

Recommended Read: How to Get Around In Cuba

So, is this the end of the iconic cars of Cuba?

The image of Cuban streets lined with vintage, lovingly restored vehicles is a romantic one for holidaymakers. The reality is, though, that the Cuban people once had little choice but to keep them running. Now that new cars have become available to Cubans, will we see the end of the backstreet car repairs, and old rumbling engines?

We certainly hope not. The cars have become such an iconic part of Cuba’s history, and, in a country where tourism is so important, they’ll stay on the road for as long as they can. Proud owners often charge tourists to take photos of their cars, but for just a few pesos they’ll often let you jump inside.

Hiring them for a tour is also an option available to tourists. You can hire a car to take you to a Cuban restaurant, tour of your resort or anything else you want to see. It’s a good idea to book through a reputable company or your hotel to ensure the car you travel in is safe. If the vehicle arrives, and you don’t feel 100% happy with the condition of it, don’t feel obliged to go ahead with the ride.

The country may feel like it’s stuck in a time warp, but that’s part of the charm. The political unrest which led to Cuba’s fleet of 1950s cars may not be positive, but the pride which they have instilled in the Cuban people is certainly inspiring. The car repair skills acquired out of necessity have become invaluable to the locals, and the tourists flock back in their thousands every year to see the colorful cars which line the streets.

This guest post was written by Izzy Guarella. Izzy is a keen traveller, and recently visited Cuba. When at home, she writes for UK-based company, PassSmart.com, who match learner drivers with instructors in their area.

Related Post: Top 5 Reasons To Visit Cuba In Your Lifetime