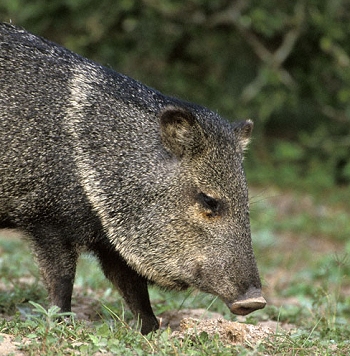 Collared Peccary is the only wild, native, pig-like animal that you will smell before you see it!In Costa Rica it can be found in Corcovado National Park and in the Monteverde Cloud Forest Reserve. But that’s not the only fascinating fact about this creature. Here’s a few more:

1.The Peccary’s sweat glands are located in its rump and is used as a territorial defense mechanism and marking. They defend their territories by the rubbing of the rump oil gland against rocks, tree trunks and stumps.

Check out the best places for wildlife spottings in Costa Rica.

2. They live near water systems with plenty of shade because unlike the Coyote or Bobcat, Peccaries are unable to evaporate moisture through panting to prevent overheating. They always seek out shade where they spend the majority of the day out of the sun foraging.

3. To fend off their adversaries they square off, lay back their ears, and clatter their canines. In fight they go head on biting and occasionally lock jaws.

4. The Collared Peccaries move about in small family groups. They are also omnivores because eat roots, fruits, insects, worms, and reptiles. The dominant male does virtually all the breeding which occurs throughout the year, depending on climate, especially during the rainy season. More young are raised in rainy years.

5. Females usually give birth to two young after a gestation period of 145 days. They den in hollow logs or hollows in the ground.

6. Birthing mothers retreat from the herd to prevent the newborn from being eaten by other group members and rejoin one day after giving birth.

7. Only the older sisters of the newborn are tolerated with the young and they often become nursemaids for the new mother.