Chateau de Promenthoux: Lake Geneva Most Exclusive & Expensive Property Is Up For Sale 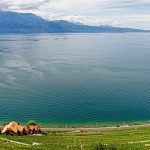 Chateau de Promenthoux, Lake Geneva’s most exclusive and expensive property, is on the market for the first time in over 50 years. The sale will be handled by Concierge Auctions, the auction house preferred by celebrities and the most demanding sellers. The property will be sold to the highest bidder in the summer of 2017, and it is expected to fetch well over 35 million pounds (over 45 million USD). One of the most exclusive properties in Lake Geneva and how to purchase it. In this article, you will learn about Lake Geneva.

This luxurious lakeside mansion was designed by Stephen Sauvestre, the architect best known for having designed the Eiffel tower. Chateau de Promenthoux was built in 1896 as the summer home for Jean-Philippe Worth, son of Charles-Frederic Worth, the esteemed fashion designer and founder of the French house of high fashion The House of Worth. The first to promote his garments with live models as well as the first to sew labels onto his clothes, Worth is considered to be the father of Haute Couture.

Related Read: What is the tallest lighthouse in the United States

Located on the north shore of Lake Geneva, this property covers a sprawling 1300 meters of construction within a 3.7-hectare private forest. Despite its idyllic and isolated setting, Chateau de Promenthoux is only a mere 25 kilometers away from the Geneva city center. Among the many splendid exterior features is a series of vaulted stone pillars that echo the arches in the foundation of the Eiffel Tower.

The interior of the home is divided into 4 floors and includes 4 ballroom-sized meeting rooms, 8 bedrooms, 6 bathrooms, multiple kitchens, a library, a study, and separate lodgings for staff. The Chateau’s numerous balconies offer panoramic views of the lake and the property benefits from having its own private dock, which is the largest on Lake Geneva. In fact, a large section of the house extends out over the water and provides ample space for boats to be moored underneath the structure (underneath the vaulted stone arches, in fact).

Recommended Read: Best places in the United States to live

Situated on the north side of the alps and shared between Switzerland and France, Lake Geneva is a crescent-shaped mountain lake that is 73 kilometers at its longest and 14 km wide at its widest. It is also incredibly deep (310 meters at its deepest) which gives the impression that it is the inverse of the Alps that tower above it.

Famous for yacht racing, the lake has always attracted cultural elites. Previous homeowners have included David Bowie, Lord Byron, and Mary Shelley even wrote Frankenstein on one of her getaways to the lake house she frequented with her husband and fellow scribe Percy Shelley. The Rock group Queen had a house in Montreux where they recorded many of their albums, and a statue of the late Freddie Mercury stands on the North Shore of the lake.

Whoever ends up purchasing Chateau de Promenthoux at the upcoming auction will be neighbors with recording star Phil Collins and seven-time Formula One world champion race car driver Michael Schumacher.

The home is being sold by the Durand family, which has long ties to the Swiss and French aristocracy and has lived in the house for the last 50 years.

Are you traveling to Geneva? Book your Geneva airport transfers with Holiday Taxis.