Don’t you just love when you get a bonus tour included in a sightseeing tour in Boston package that you were totally not expecting? It’s like finding an extra $100 in your pocket. Well, at least that’s what it felt like for me when I discovered that my family and I get to cruise the famous Charles River in Boston when I got my tickets for the Boston Super Tours to trolley two-day hop on hop off pass. 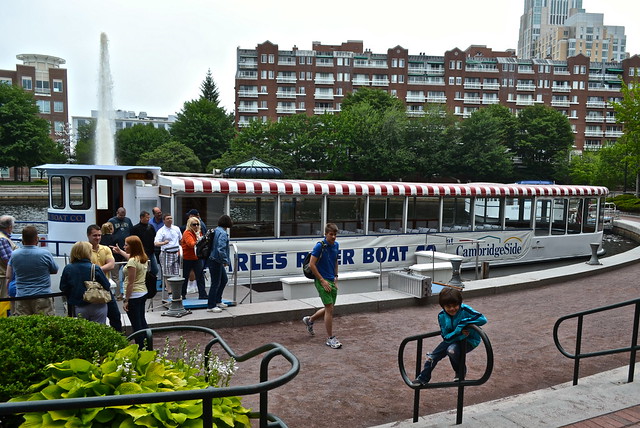 My brother lives in Cambridge, Massachusetts right near the river, and always tells me about the Sailing Regattas and the frenzy of the crowds, and of course, rowing races which are internationally known, as well. Plus, some of the best neighborhoods in Boston to visit and the most important universities in the United States can be seen boat side.

Why take a Boat Tour along the Charles River in Boston?

Boats usually aren’t as fast-paced as trolleys or buses. And they certainly aren’t as arduous as a walking tour. Plus, there is plenty of room for kids to burn off some of their energy when the whole novelty of being on a boat wears off. And with this, the parents get to enjoy the views and also allow some of the tour guide’s information to sink in and maybe even learn something new.

Once you arrive in Boston, you’ll immediately get hit in the head with just how historic and important Boston was and still is for the United States. The Charles River was a key navigational route for Captain John Smith as he explored to mapped out the New England Coast. (More fun facts about the river below).

Boston is considered one of the top Maritime cities in the New England area, if not in all of the US. With the legendary Regattas and rowing races.

4. Length of the Tour

The whole tour was around one hour long. Just enough for us to see all of Boston and Cambridge. But more importantly, enough time for the kids to not drive us completely batty and even keep their interest alive for the most part.

5. Sights Along the Charles River

Boat Houses from tons of Universities in Boston

Fun Facts about the Charles River in Boston

We did the tour via our Boston Super Tours Premium Ticket Package. They included five bonus tours on top of their two days hop on and hop off trolley tour. I’m not a huge fan of Museums, and the boat tour was something that our whole family enjoys doing.

Schedule – you can either call Boston Super Tours or find out when you pick up your tickets about the different times of the tour.

Location – The tour is located at the back of Cambridge Side Galleria Mall.