The Most Exciting Carnivals in the Central and South American Countries

During the first three months of the year, the Central and South American countries explode with the wildest, loudest, liveliest, and most colorful carnival celebrations the world over. While all of these celebrations come complete with amazing, colorful costumes, parades, music, and all of the celebratory craze that you might find at any Mardi Gras in the United States, each has its own style, flare, and expectations. Consider this list of the most exciting carnivals that can be found throughout Central and South America.

Carnivals of Central and South American

This is the most famous (and largest) carnival celebration that occurs in the world. The event dates change but usually fall within the middle to end of February, and attracts millions from all over the planet. Each year has a different theme, and dance parades called “samba schools” from various neighborhoods take to the streets to show off their costumes and moves. Costume balls and street parties fill the streets with music and floats that are surrounded by the constant flow of music, food, drink, and dancing. Carnival celebrations explode all over Panama, but the largest by far is held in Panama City, Panama. Like the celebrations that take place in Rio, carnival parties are generally held sometime within the last two weeks of February. Complete with impressive parades and Panamanian music and food, another unique aspect of this particular celebration has to do with water. Water “fights” are common, and generally involve citizens dousing each other with buckets of water in the oncoming heat. If you’re able to get to Panama during this time of year, make sure to stop by for a party in the capital of Panama, one of the best places to visit in Central America. 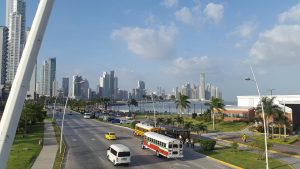 Carnival in Bolivia tends to be a bit more religious and conservative than many other celebrations across South America, so for those who want orthodox tradition, folkloric themes, and religious dedication is what major cities throughout the country offer. Beer is still consumed during the celebrations, but unlike other, more rowdy celebrations, it might be difficult to find spirits or wild, drunken tourists flooding the streets of Bolivia’s towns and cities. Locals generally dress up as devils and dance until all demonic spirits are removed from the country. A 5 km long parade giving remembrance to strong Catholic celebrations, Spanish conquest, and theological fights between good and evil.

If you are able to make it to the southernmost area of South America during the last week of March, Gualeguaychú is the place to visit. By far not the largest carnival festival on the continent, it is one of the last. The party generally ends in Argentina, but visitors will still love all the things these parades and scantily-clad women bring to the festivities. When the party ends on March 19th, a massive fiesta begins, and everyone heads toward a giant stadium in the city to enjoy food, drink, and great music to wrap up the party until next year.

Angie Picardo is a writer at NerdWallet’s TravelNerd blog, where you can find money saving tips on how to save up for a Carnival sojourn by setting financial goals.