Best Bike Rental NYC: Who Would Have Thought New York is a Bike Friendly City

What’s the best way to see NYC, without sitting on a bus or walking till your feet fall off? Biking, baby. If you asked me to do a bike tour of NYC twelve years ago, when I lived here, I’d laugh. The very thought of competing with the taxis or mobs of people would have been the death of me.

But NYC has come a long way since then. With gorgeously paved bike paths taking you all through Manhattan and other boroughs, I was stoked to hop on a bike and go!

Reviewing a lot of the different bike tour and rental companies, I decided on Bike and Roll. First of all they have over eight different shops all over the City. They also offer guided tours or rentals.

At first I truly debated the guided tour, but at the end decided on taking the bikes out and exploring at our own pace.

Confession time. Even though I grew up in and around NYC, I never went over the Brooklyn Bridge. I mean, not even in a car. This historical monument is one of the easiest bridges to walk across, with some of the best views of Manhattan’s skyline. It was time to check it out.

The shop is super easy to find. It’s located right next to the Staten Island Ferry, next to Battery Park. The staff is really helpful and if you’re not doing a tour, they give you a map of the bike paths and recommended routes. (The map saved us – a lot!) The best part was the bikes. They were new, very light, and in great condition. 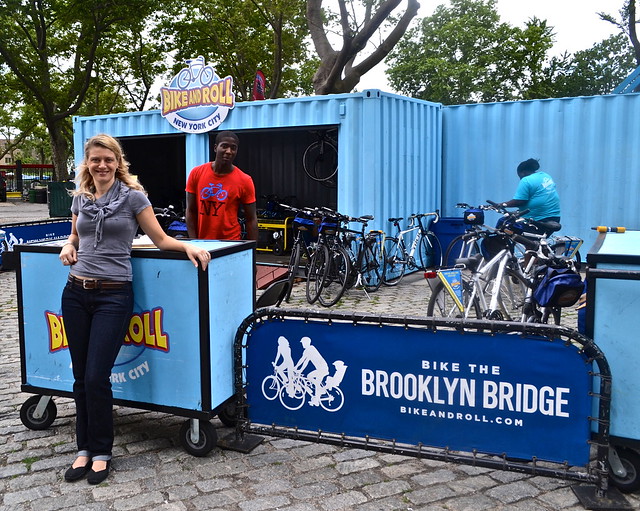 The Route – to cross over Brooklyn Bridge you have to cross over most of Downtown. Which is the fun part. Downtown NYC is considered to be not only known for the Twin Towers, 9/11, and Wall Street, but also it’s the oldest part of NY and most historical.

Battery Park – we crossed over the park with great views of the Statue of Liberty, memorials of immigrants, and war veterans.

Bike Paths – once you get out of Battery Park, that’s when the bike path really begins and has its own designated road so that you are either away from the cars or on the same streets, but they can’t enter your path. Just make sure you follow the same rules as the cars do.

Brooklyn Bridge – What a place! When you first enter it you feel like you’re going to get clobbered by the people walking until you get to the path and see that there is a designated bike path and walking path. And beware if you’re walking because the bikers scream “BIKE PATH, BIKE PATH” even if you’re a tenth of an inch on the bike path. Needless to say, it was smooth riding the whole way for us.

Brooklyn Heights – This is one of the best neighborhoods of Brooklyn, right on the waterfront with adorable brownstones and manicured streets.

Lunch Break – the benefit of doing a bike rental rather than a guided tour was that we could stop anywhere, anytime. Lunch was on the main street of Brooklyn Heights and a great spot to people watch.

Wall Street – Aside from being a travel junky, I’m also a trading junky! So being in the Financial center of the world overlooking Wall Street, New York Stock Exchange, NASDAQ, and all the other imposing buildings is something that every person visiting NY and every New Yorker must do!

Historic New York – did you know that New York City was the first capital of the US? I bet you didn’t! After George Washington was chosen to be the first President of the United States, he started his term in Downtown NYC. It was only for one year before they moved.

Our bike ride was actually a date for my husband and I since we don’t get to do much while traveling with our kids on our own. But with my parents near by, we took a few hours to our selves while the kids were being spoiled by their grandparents. However, this only gave us a limited time of about four hours.

I would have loved another 30 hours on a bike, because it allows you to really get up close to all of the hidden and not so hidden parts NYC has to offer.

But its not for couples only. We saw tons of families riding around on the safe paths. And Bike and Roll offered all sorts of bikes and accessories from child seats to tandem bikes.

How to Rent Bikes with Bike and Roll New York

We did everything via the internet off their site. However, they have offices all over the City that you can simply walk in and rent.

If you want to do a tour, I would recommend organizing it before hand so that you know which tour, the time and when it starts.

8 thoughts on “Best Bike Rental NYC: Who Would Have Thought New York is a Bike Friendly City”