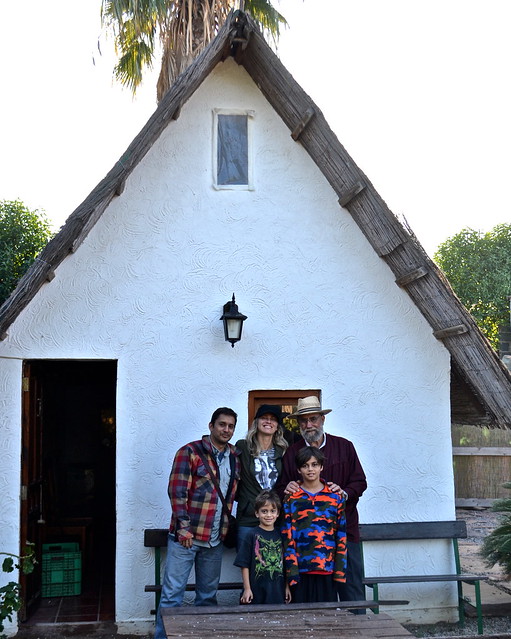 Our epic trip to Spain lasted over six weeks and in that time I can honestly say that less than a handful of things were so amazing that I would scream from mountaintops to get the word out for families to MUST – DO.

Visiting Barraca Toni Montoliu was without a doubt the best one of them all.

Maximo, from Valencia Tourism, highly recommended for us to do this as one of the most traditional experiences you can have in Valencia. I was excited to do it, but after looking over the website, I really couldn’t explain exactly what we would be doing there to my family.

But Maximo has been so great in telling us about activities to do, especially with kids, I totally trusted him and we all went with open eyes.

What To Expect When Visiting Barraca Toni Montoliu in Valencia, Spain

The farm and restaurant are located about fifteen minutes from Valencia center. You can easily get here by public bus or taxi (if you have four or more people, it’s probably even cheaper by cab).

The area is still one of the most agriculturally important for the area, with the number one product being oranges. However, with the Mediterranean weather, you can also see artichoke farms, olive farms, beans and other greens.

Before becoming a restaurant owner and chef, Toni Montoliu, was a farmer. However, being born and raised on a traditional farm in Valencia, making Paella becomes part of your blood. Some people, obviously, do it better than others, and such was the case for Toni.

In his late 40’s he decided to open his farm up as a restaurant and a day for native Valencianos to spend with the family.

But it is much more than just a dining out experience. You can make the Paella with Toni.

FUN FACT – Toni was invited to be a Master Chef on the Italian version of Paella mastery. So cooking alongside him you really get the true essence of how to make Paella.

1. Cooking Paella – the REAL Valencia Paella experience is cooking it outside on a wood-burning stove top or grill. 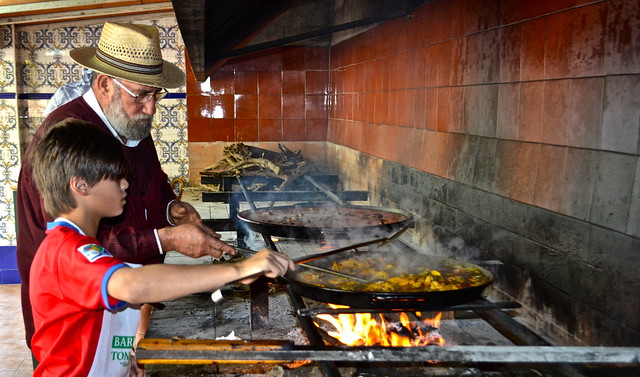 The actual pan is also called Paella and fits perfectly on the stove. 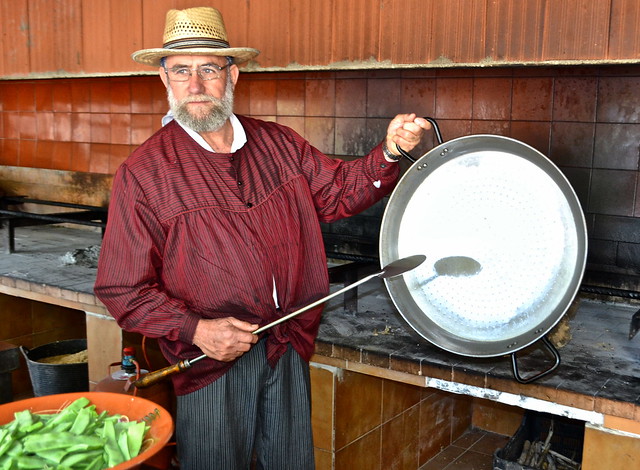 2. Ingredients and the wait – when we arrived at the farm, Toni was arranging the stove and in the meantime, we were given drinks (beer, wine, and juices or pop for the kids) and lots of peanuts. 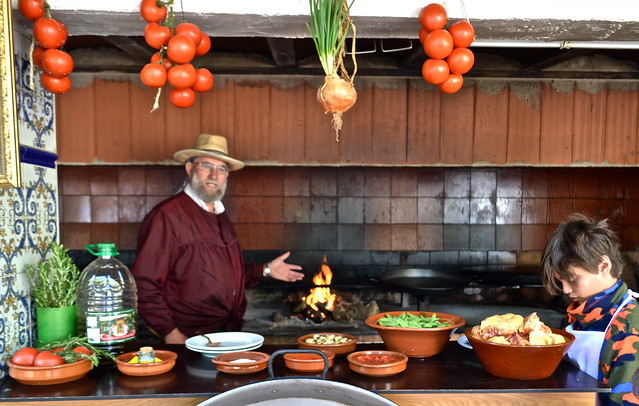 Once the stove was ready, Toni took us all to the actual farm, so we can pick some ingredients ourselves. Most of the ingredients he takes directly from his farm, except the meats. 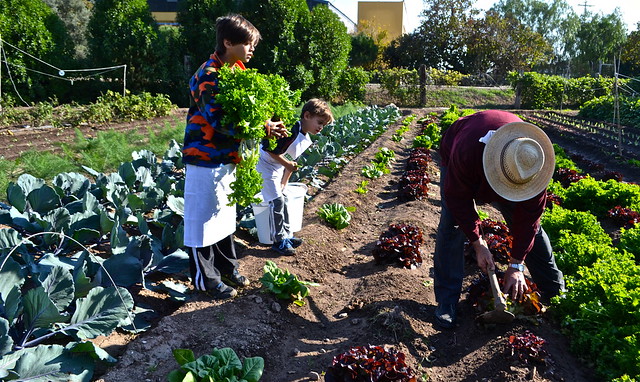 3. Farm animals – before returning to start cooking, we visited Toni’s animal barn. It’s tiny and the animals he has are mainly goats for the milk and cheese and donkeys, for the donkey rides. 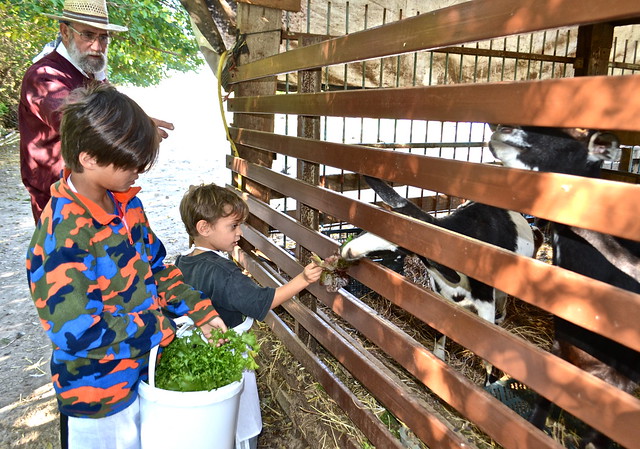 4. Preparing the Paella – This was the absolute most fun. First of all we were all able to participate equally. Toni started cooking paella at the age of four, so he was thrilled to get my five-year-old fully part of the cooking process. He was completely in on the whole fun. 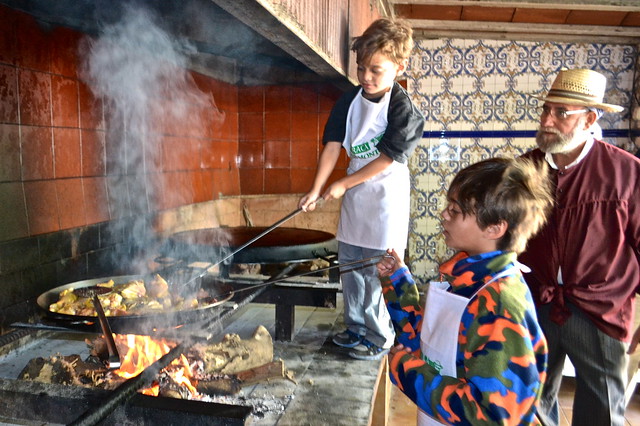 5. Horse carriage ride – one thing we’ve learned about cooking Paella, the broth is the most important part and can’t be rushed. This process is usually 45 minutes or more. So instead of us sitting around drooling and waiting for the thing to boil, Toni has a horse carriage ride down memory lane. 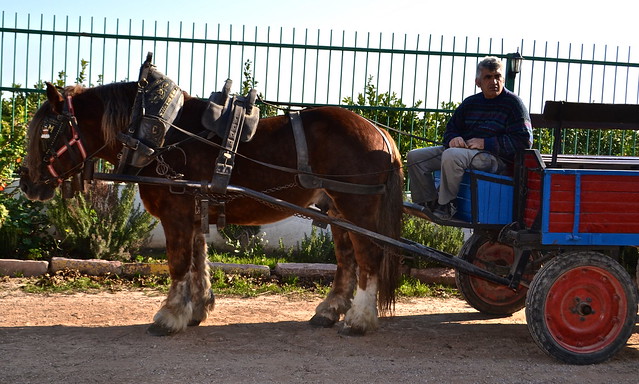 What is a Barraca? Barraca is the original type of home that was in rural Valencia and where Paella was started. Toni, actually, has several lots of land in the area, and the first stop on the horse carriage ride was to an authentic Barraca. 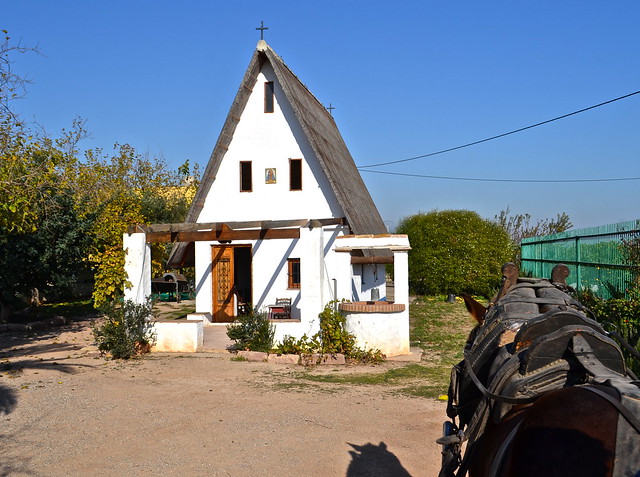 The house is designed as it once was. The downstairs is where the family lived, cooked, and spent time when they weren’t working the land. 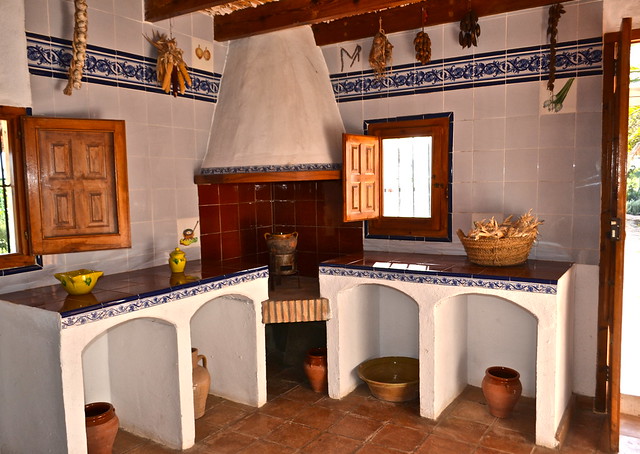 The upstairs was the storage area for the food. These houses were around the 18th and 19th centuries before refrigeration, so this was technically their refrigerator. 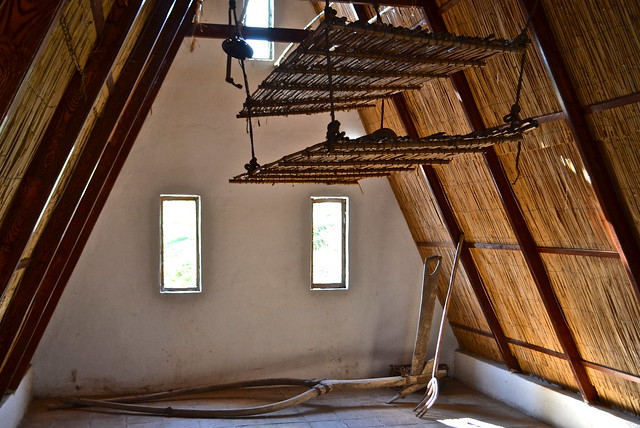 Unique fact – The Barraca also had something like a garage area, that was part of the house. This was where the animals lived, kind of like a separate room from the family.

Our next stop, also a huge piece of land owned by Montoliu’s family, was an orange grove. Gratefully, we were there towards the end of the orange and mandarin season and got to pick tons and tons of the sweetest mandarins we’ve ever tasted. 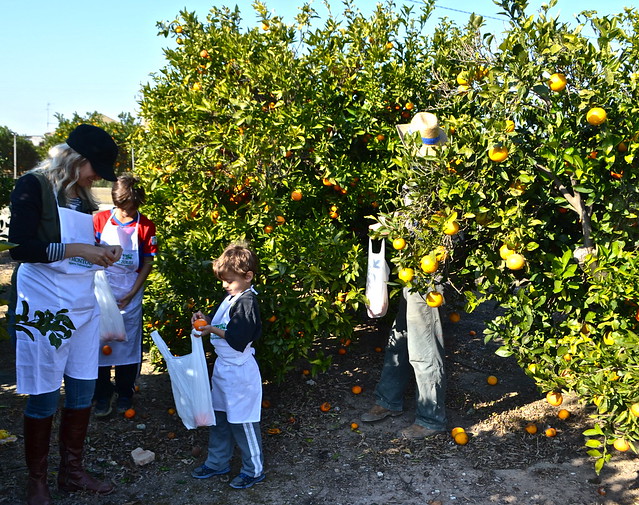 6. Time to eat – we arrived back from our ride just in time for the paella to be ready.

Eating inside the restaurant was much more than we expected. First of all, it took quite a while for the paella to be served because of all the food that was brought to us beforehand.

Tapas is part of the tradition, and we were given four different, traditional Valencia dishes to start off with. 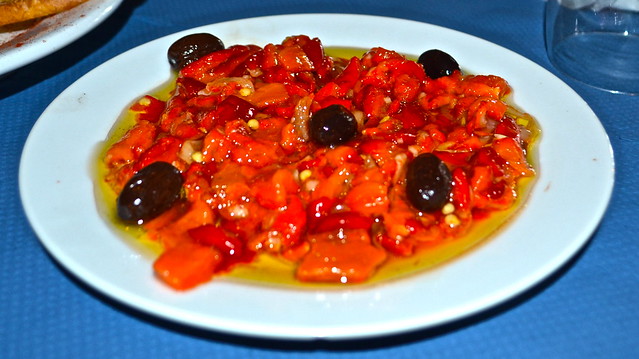 Paella is never served without salad, and the salad we had came right from Toni’s farm. The literal definition of farm to table.

And then the Paella! By the time it arrived at us, we were stuffed, but once we tasted our creation, we devoured it all. 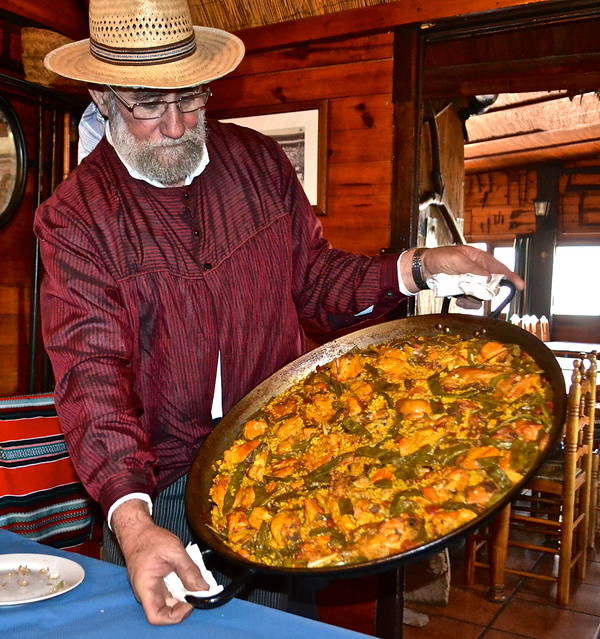 It was by far the best meal I’ve had during our entire Spain trip! And my kids agreed with me the whole time.

7. Donkey Ride – By the time we ate the Paella, without even realizing it, we have already been at the farm for a good four hours. And had no interest to go anywhere soon.

So when we were told there are donkey rides, my kids (and I) were all over it.

8. Sad to Go – All in all, we were there for five or six hours and could’ve stayed another three easily. The only reason we left was, without knowing what a great all-day activity this was, we made other plans to visit another attraction.

Don’t let the idea of it being outside of Valencia deter you from visiting. This was one of the absolute best family travel experiences we have had in a long time.

If you only have three or four days in Valencia, work hard to make this one of those days. 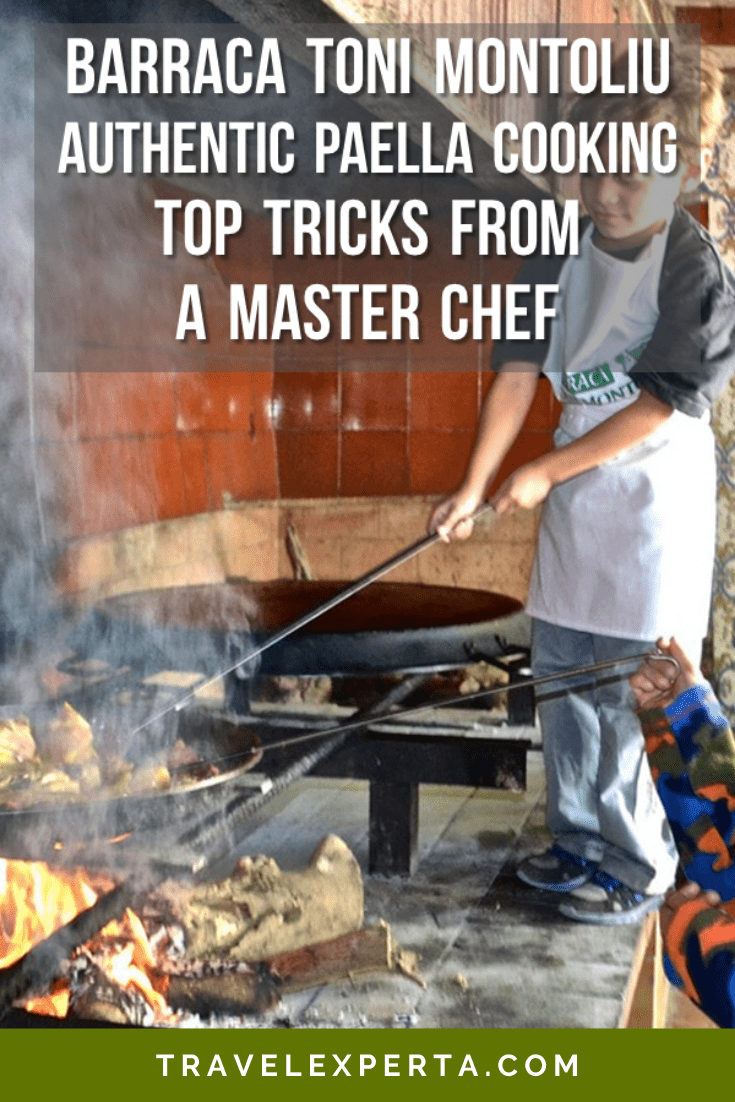