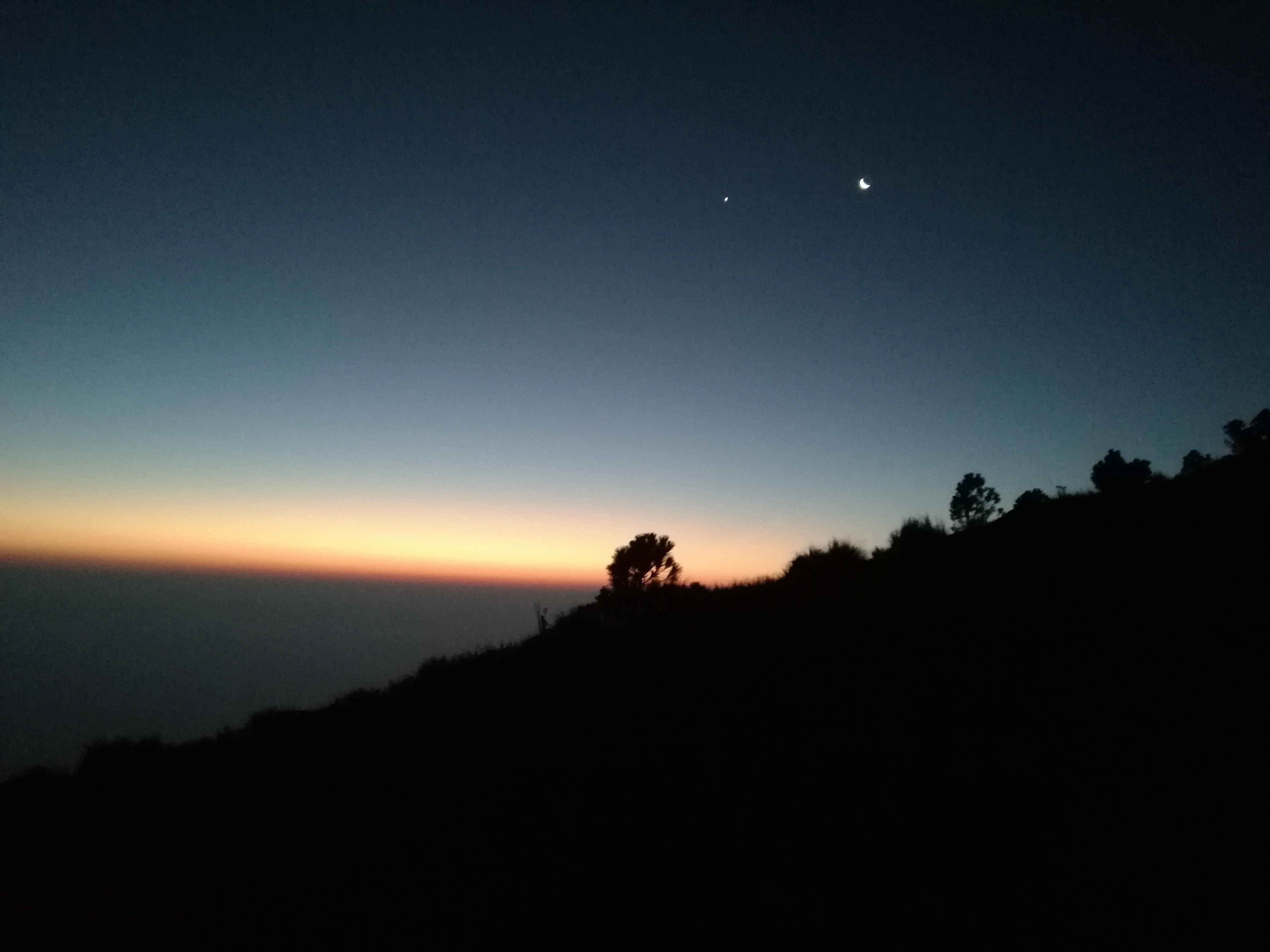 If you read my last post, you know that I have hiked the Acatenango trails and been to its summit more than 15 times. That is because it is gorgeous, of course, but mainly because it is the closest one to me. Plus, even if there are some others that in my eyes are better for their wonderful terrain, Acatenango has something that makes you fall in love with it. That is exactly what made me want to go back yet again.

This time we decided to walk most of the night to be able to get to the crater right on time to see the sunset. This would give us the chance to see the different ecosystems of the volcano in a different way and to save some time because we would have all Saturday for ourselves instead of spending two days at it. 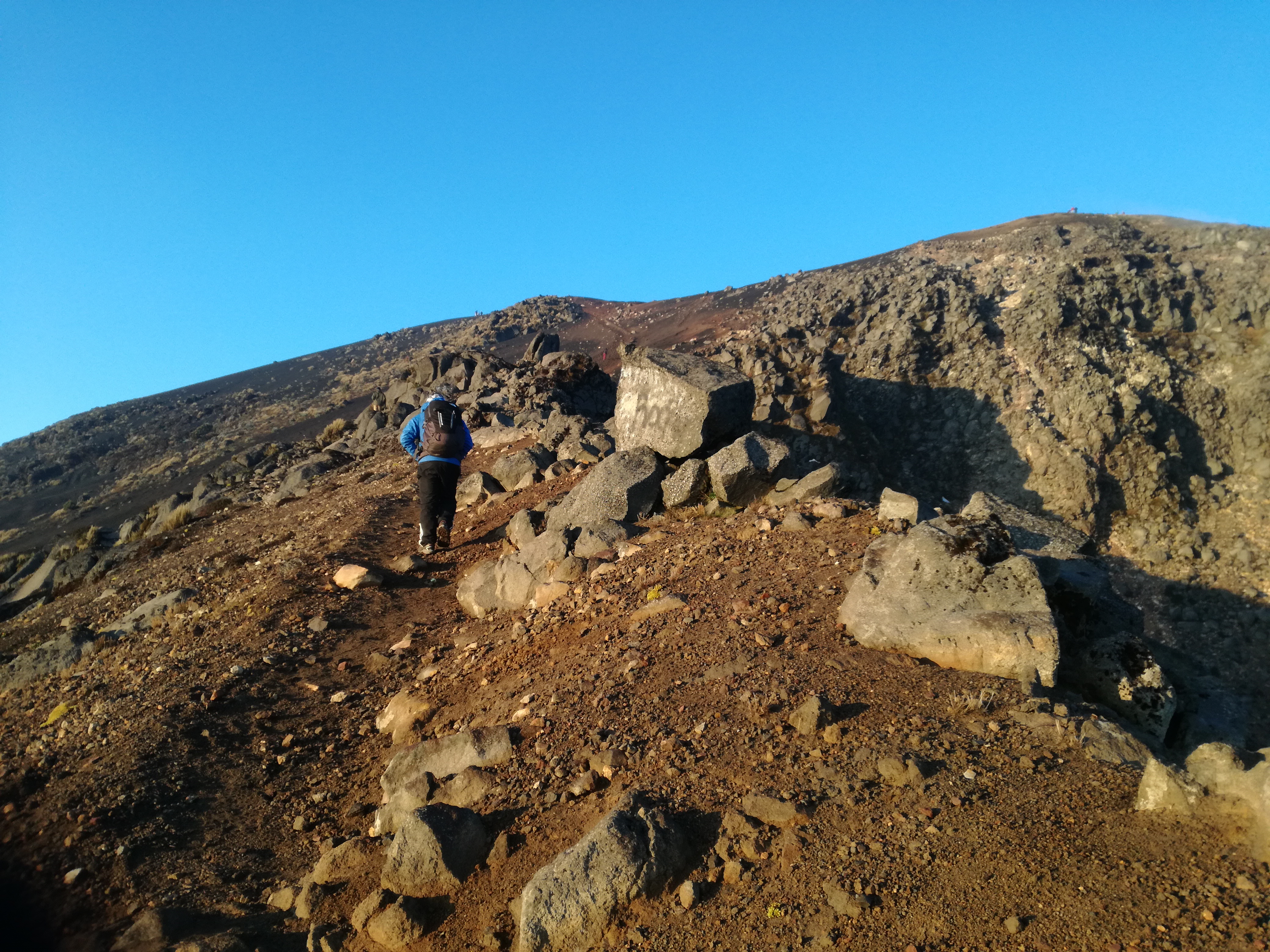 When we got to la Soledad town, we got a pleasant surprise. Most of us were expecting cold, windy, and cloudy weather due to the fact that in the prior days the volcano, and its neighbor, Fuego Volcano, had been getting some snow at the top. However, what we saw were a clear sky and no wind.

On the first kilometer, we started having trouble, one of the girls that were with us started feeling terrible. It was her first time ever hiking. But with some rest and patience, she was able to continue and get up there with the rest of us.

The weather remained great for the rest of the walk, however, the ascent was slow.

By the time we reached half of the way, we realized that we were going too slow, so the most experienced guy in the group suggested that we should take the route known as el Tonel instead of the touristic route. It isn’t a faster or easier one, in fact for me, it is a bit tougher than the touristic one, but it takes you along the side of the Guatemalan  volcano where the sin hist directly as it comes out. That way we wouldn’t miss the gorgeous sunrise. 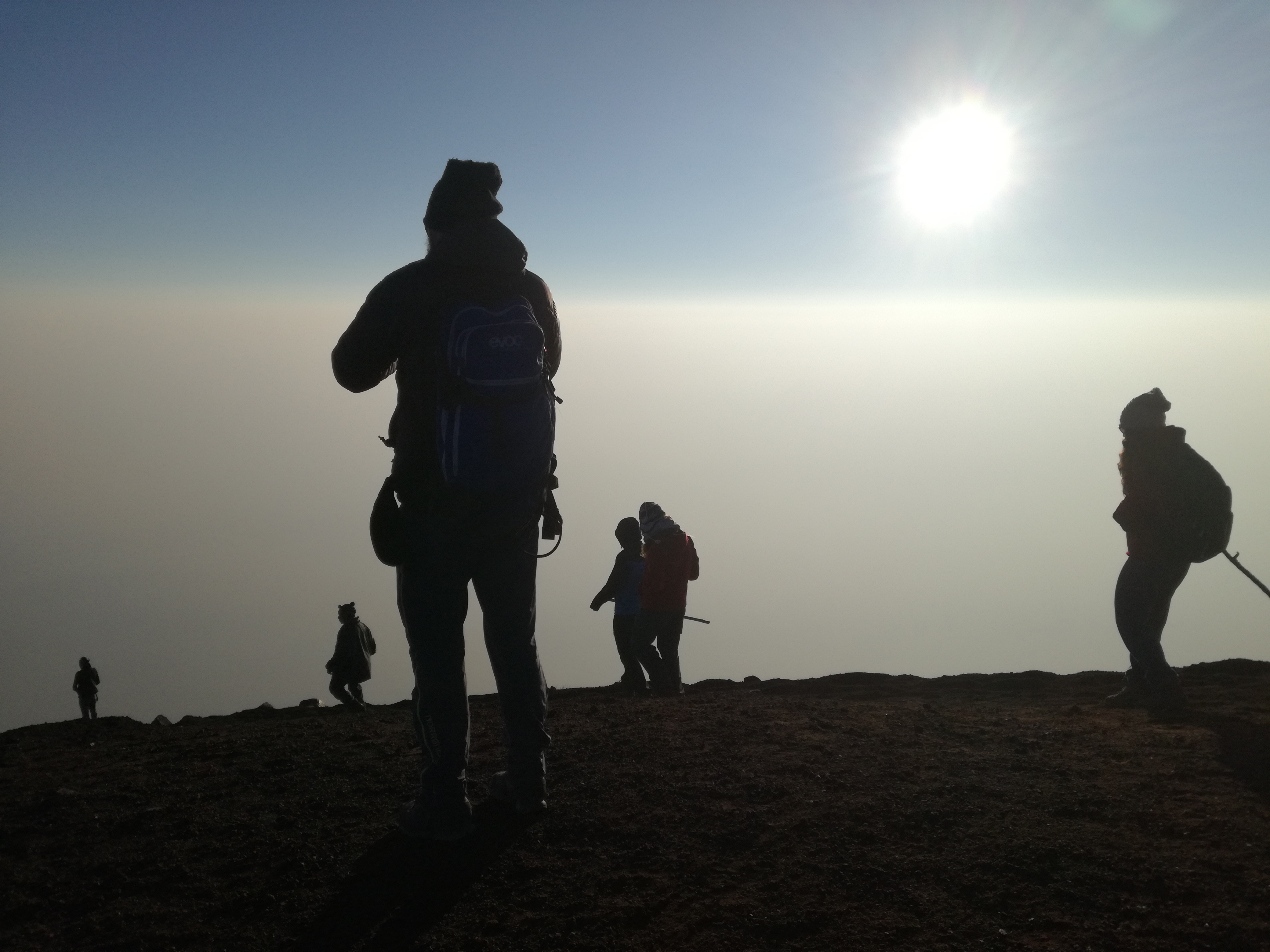 The only problem with it is that the wind also hits it directly, making it a lot colder even with the amazing, cloudless weather that we were having.

Finally, at around 5am, we reached the point where the forest ends and all that is left is some deep sand dunes that take you up to the crater. At this point, the group got broken down into three smaller ones. Some really wanted to hurry, so they would be able to see the sunrise from the crater, and some others were too tired to do that. And the third one that wouldn’t attempt to get to the summit.

I was left with the second group. Anyone would think that it was annoying to be let back, but the tiny group that I was left with was actually formed by a bunch of extremely fun people. We had a blast as we slowly made our way to the crater. Still enjoying the amazing weather and with no clouds in sight. 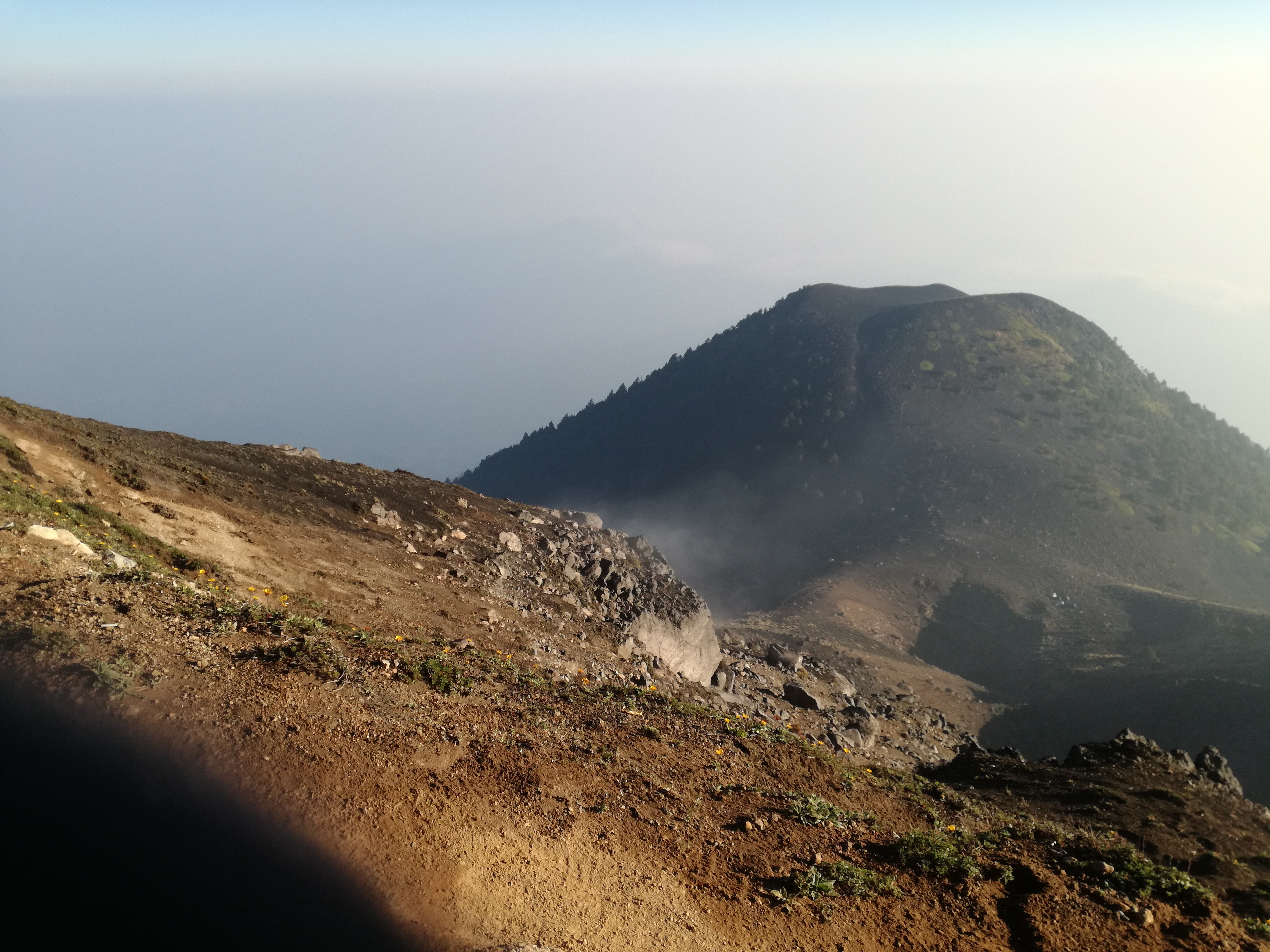 After that it is time for enjoying the views, looking at the explosions from Fuego Volcano, eating breakfast, and then my favorite part, descending.

Don’t get me wrong, I thoroughly enjoy the hike up and challenging myself however, being able to combine the beauty of the volcano with some running, or light jogging at some parts, on the way down is so much fun!

Just as we started going down the clouds stating taking over the volcano, giving it a spooky and special vibe but most importantly, allowing us to descend in cool and nice weather.

That is the beauty of volcanoes, it doesn’t matter how many times you get up there, the experience will always be different in some way. So yes, whenever I get another chance I’m definitely going back to Acatenango Volcano. But for now, a relaxing trip to Lachuá Lagoon is waiting for me. 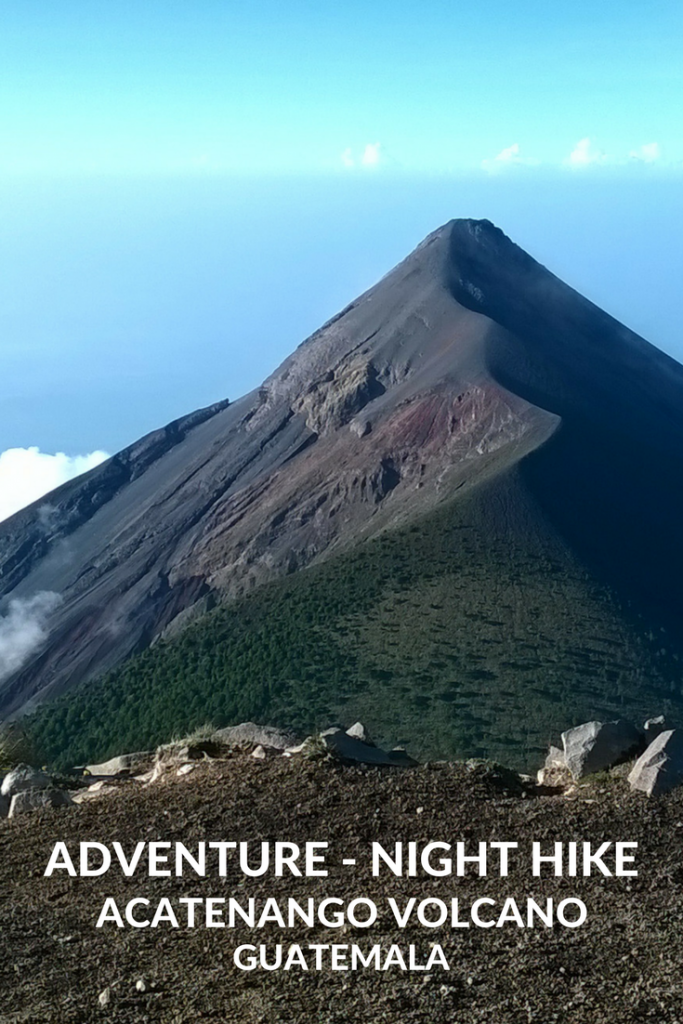