6 World Famous Landmarks You Have To See Before You Die 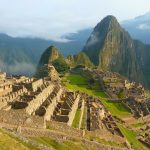 All over the world, there are several attractions that you should see at least once. To be pictured in any of these and to physically experience what the destination has to offer is likely to be part of most peoples bucket lists. Here are some of the most iconic landmarks all over the world, which you should definitely see before you die.Six of the most famous landmarks that anyone looking for the best places to visit in the world should have on their travel bucket list.

6 Famous Landmarks To See Before You Die

Declared as a World Heritage Site by UNESCO, this is one of the reasons why many people head to Peru. The Inca citadel sits atop a mountain, which makes it one of the stunning historical landmarks in the world. Today, it is the most popular remnant of the Inca civilization. It can be reached through a variety of ways, including days of trekking.

A staple for anyone who happens to be visiting Rome, this is one of the most famous historical sites around the globe. This oval amphitheater is recognized as the largest that has ever been constructed. Believed to have been built between 70 to 80 AD, it can accommodate up to 80,000 spectators during the times when it is used for gladiatorial competitions and other significant public events. Visit Bridge water Travel for information about villa rental in Rome.

No visit in Paris will be complete without seeing the Eiffel Tower. Made from wrought iron, the name of the tower was derived from Gustave Eiffel, the engineer who was the one responsible for the design and the construction of the tower. The tower stands tall at a height of 1,063 feet, which is comparable to an 81-storey building. Click here for more interesting facts about the Eiffel Tower. Make sure to never leave the city without a picture of this icon, which is at its most beautiful when it is lit at night.

An art deco statue in Rio de Janeiro, this is one of the most pictured landmarks in Brazil. The statue has a height of 98 feet and it is placed on the top of a 26 feet pedestal. It has arms stretched at a width of 92 feet. It is found in the Corcovado Mountain. It is considered as one of the New Seven Wonders of the World, which is one of the reasons why it is popular among tourists.

One of the most popular spots in the city, this is often depicted in photos and postcards of Sydney. The waterway can be an excellent natural playground for sailors, or even for people who would just like to cruise along the harbor. It is surrounded not only by shorelines, but also by historic sites and natural parks. The most famous sites by the harbor are perhaps the bridge and the Sydney Opera House. To ensure you experience everything Sydney has to offer, why not rent a camper van? Visit Spaceships Rentals for more information.

The pyramid represents the ancient history of the country Egypt. There are more than a hundred pyramids, which, according to historical accounts, served as the tombs of the pharaohs. From all of them, the most popular are perhaps the pyramids of Giza. They were made through a complex process using inventive tools in a time where modern technology was not yet available.