The Adventure that Never Was – My First Time Mountaineering in Mexico 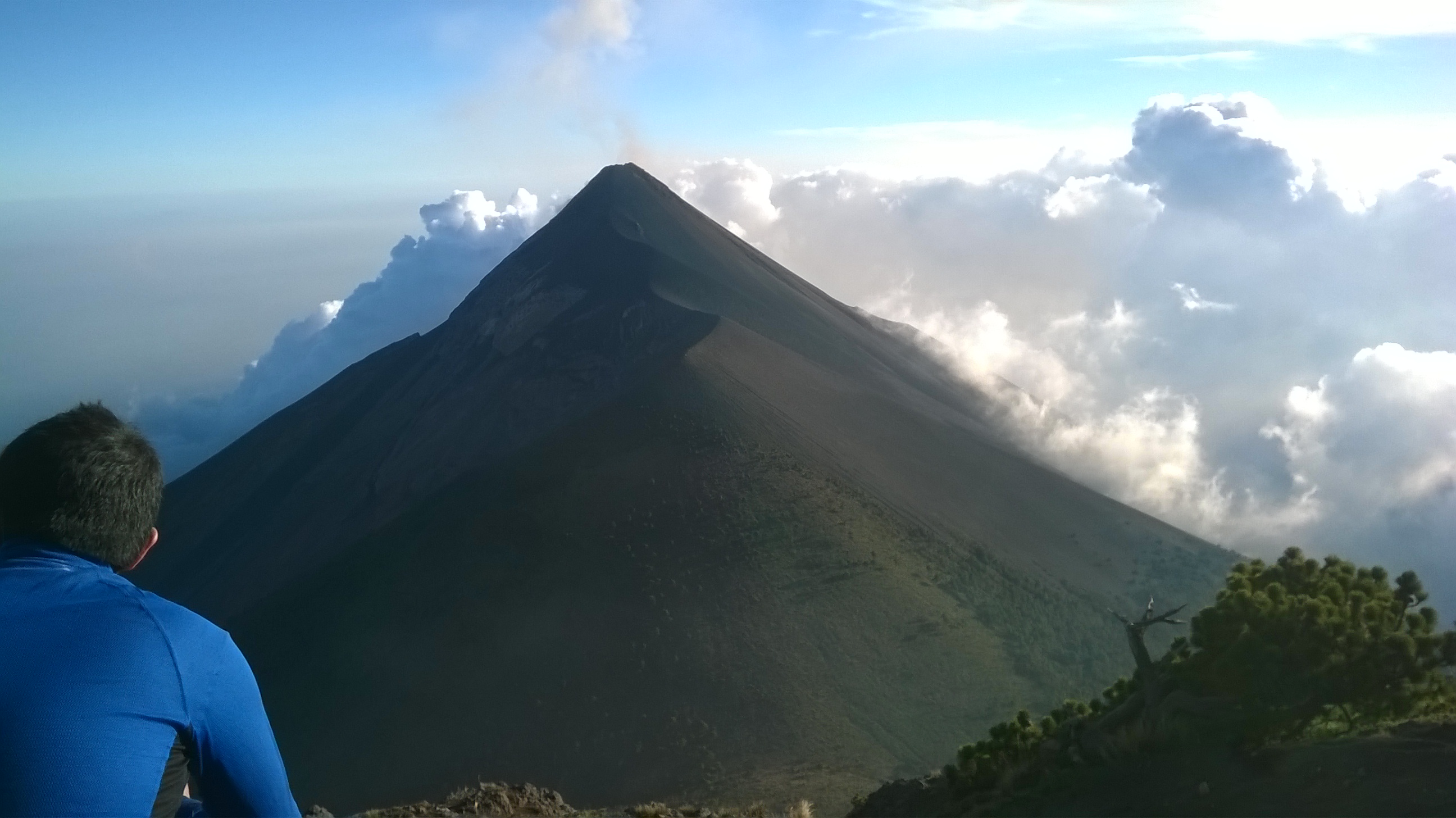 Hiking mountains and volcanoes all over Guatemala is my favorite thing to do. I have also had the chance to go to El salvador to go for a hike to three of its most Iconic summits. This is a hobby that I discover a little over two years ago and is now one of the main aspects of my life.

How It All Stated

I have been into working out and fitness since I was diagnosed with a weird nervous condition that actually gave me some blood pressure problems at 18. It would literally make me so sick that I couldn’t work ir go to school on the bad days. However I never took it seriously until I discovered how fun and relaxing and amazing it can be to pick up a backpack and hike to the summit of some volcano to camp there.

Form that moment on I decided to take the gym and running seriously as a way of getting ready for those long and challenging hikes. 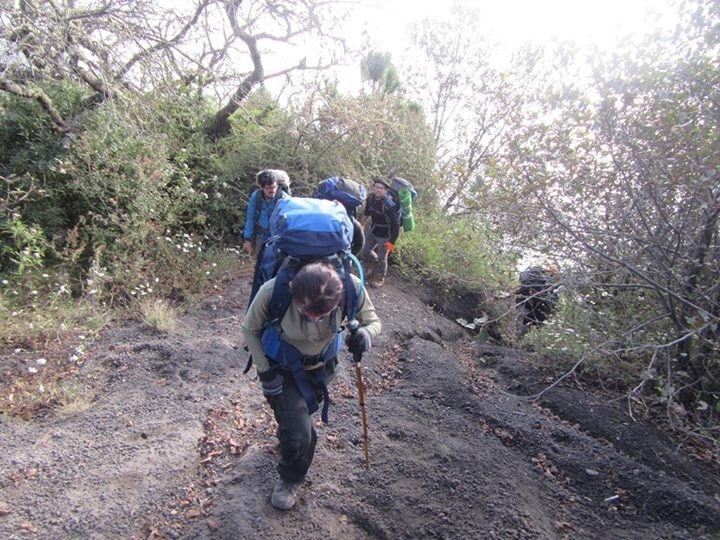 Suffering on one of my fist hikes on Fuego Volcano.

At around June 2015 I started hearing some of the people that often went on hikes with the same group as I did about some international expedition. They were about to stat getting ready to reach the summits of some of the most iconic summits of Mexico.

From hearing them I learned that these are nothing like te ones in Guatemala. During that trip they were going to experience snow and use all the equipment that goes with it for the first time. Two of those volcanoes are above 5,000 msnm (here in Guatemala the highest one is Tajumulco at ‎4.222 msnm).

This meant a lot of physical, psychological and technical training (as well as spending tons of money in specialized equipment). Since the trip was going to happen on January 2016 they had to start training in August 2015. 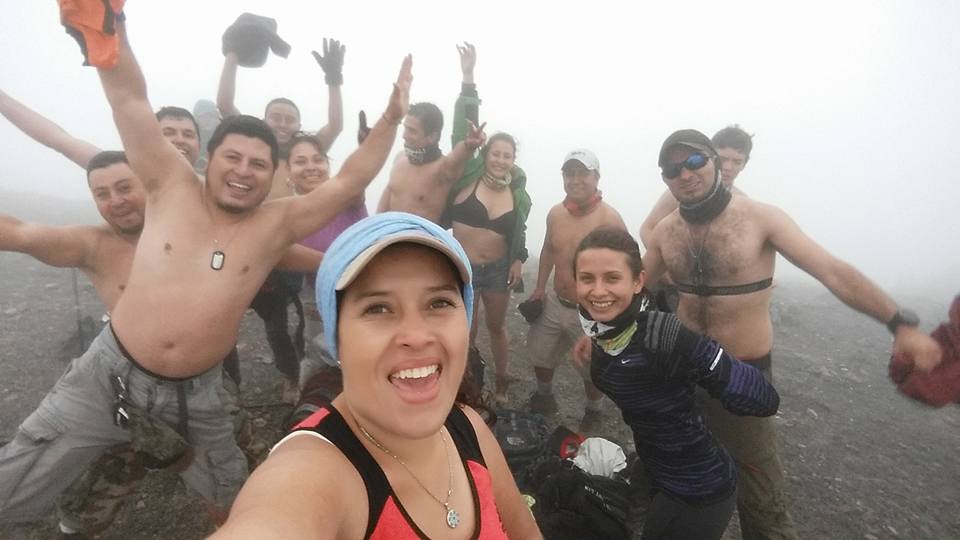 Some of the most amazing, weird and fun friends I met on Guatemalan Volcanoes

About a month into their training I joined them again for a new adventure. Just seeing them made a huge impression on me, their physical condition was amazing, they looked so professional and the best of all was that they were also enjoying it so much. I must admit that I felt true admiration that only grew as I saw them get better and stronger. Their training sessions looked horrible but they all had a huge smile on their face.

Then January came and all of the photos from their successful expedition started to be published. The place looked amazing.

Just thinking about how happy and enthusiastic they looked through the whole process and looking at the photos of that amazing place made me decide that I as going to be pat of the 2017 expedition. So I started working out even harder. Killing it at the gym and making a bigger effort at the track (I was never, and still am not an elite runner but love it!). By the time official mountaineering training started I was already feeling much stronger and confident. 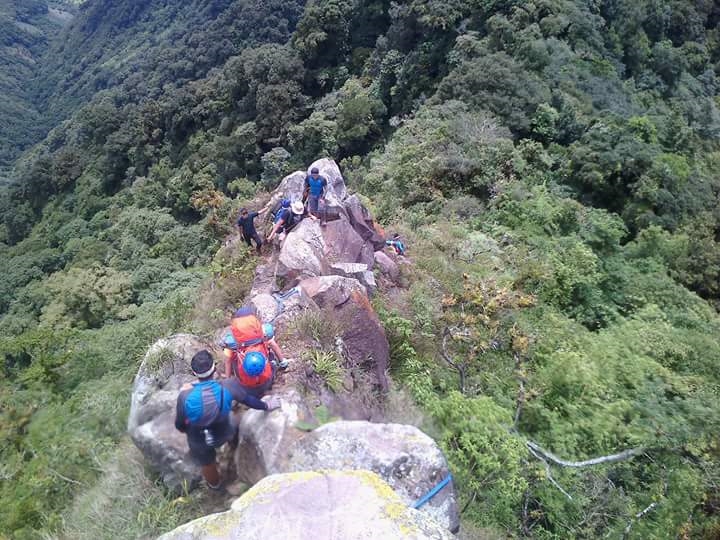 Getting Ready For Mountaineering In Mexico

Since I had been traveling with them for some time, already had friends in the group and felt extremely comfortable with the experience that the guides (who would become my trainers) had I decided to go with Sin Rumbo.

The training program involved theoretical classes each Wednesday, a daily lifting and cardio program adjusted so it could be done at any gym and hiking trips each weekend where we would practice everything that we learned on Wednesdays and push our selves to the limit. Sometimes exposing ourselves to hard climatic conditions so we could get used to extreme cold. All of this for 4 months.

Health update: By this time I felt almost as if my illness wasn’t there anymore. I still had to be careful but the effects from it were a 10% of what they used to be.

During that time I met some amazing people, my team mates, that then became close friends, I visited many volcanoes in Guatemala that I didn’t know, learned how to use professional equipment, laughed, cried and even helped motivate my team mates. It was an amazing and intense experience. 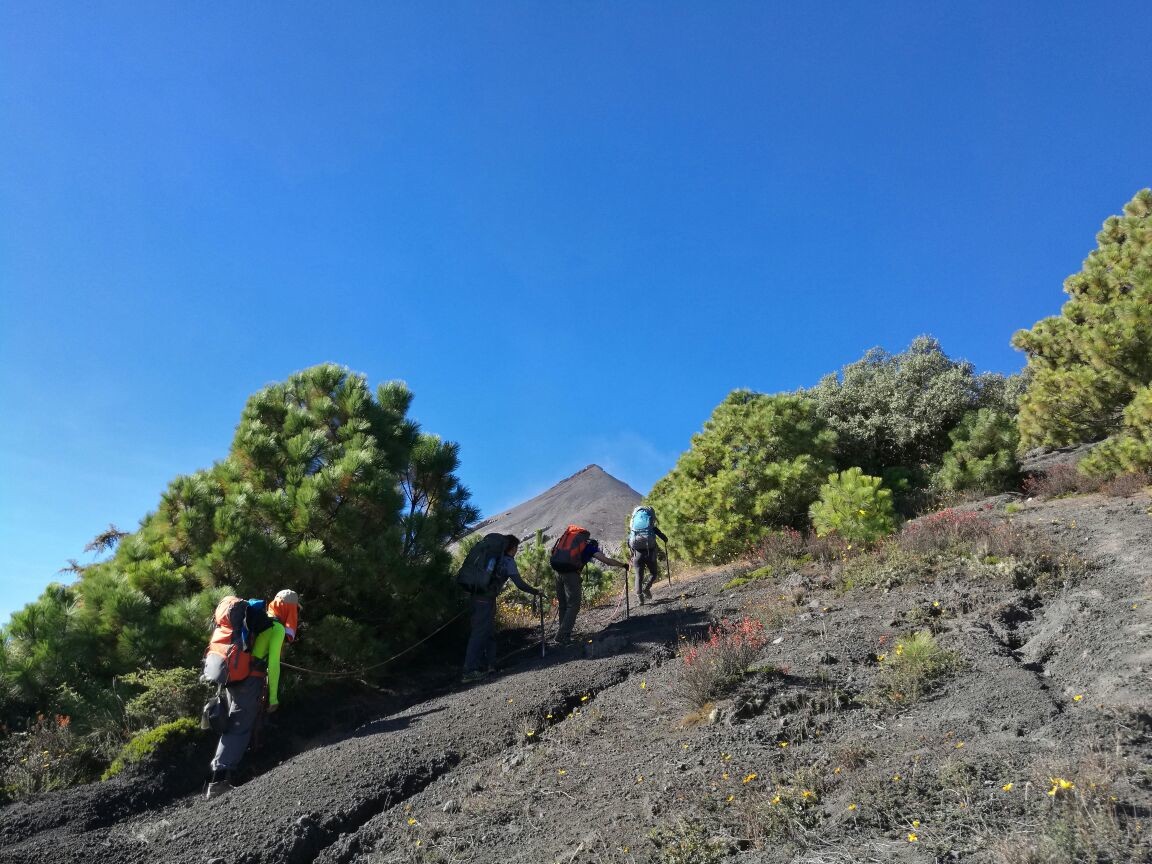 Practicing how to walk as a roped group of mountaineers would on a glacier – This allowed us to practice how to use the equipment properly.

I used all kinds of methods to be able to get the equipment I needed. It was all going great! I was ready, motivated and had a great team with me.

All I had left to do was to but my ticket and get the Mexican Visa. But that was the easy part, or so I thought.

NOTE: Keep in mind that us Guatemalans need a visa for almost everything.

Where I All Went Wrong

I got to the Mexican embassy around the third week on November 2016, so happy with all of my paperwork and just ready to make it happen. Sadly my smile almost got taken away by angry and rude staff. But I told my self, it is a governmental office, that’s normal and kept going. 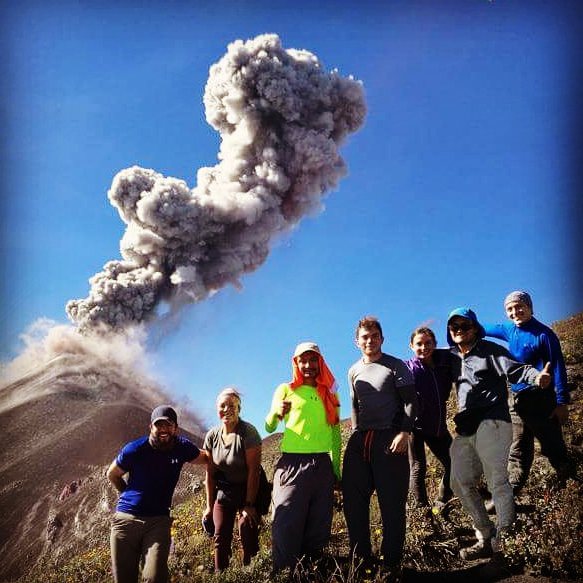 This was the mountaineering team for 2016-2017formed by Guatemalans and El Salvadorans – This was my family for 4 months.

Finally I got to talk to the person who decides whether you get it or not. I will never forget that lady, she was about 60 years old, white hair and angry looking. She started interrogating me in an extremely rude manner almost treating me as if I had done something wrong to her. As the interview ended she told me that I had to present some other documents OR ELSE.

This happened three more times. These were 3 days when I wasn’t able to work or do anything else than getting documents, bringing them to her and her interrogating me. In the end and almost two weeks later she said NO. She decided I wasn’t good enough for Mexico mainly due to my unusual job as a Virtual Assistant and Freelancer. Also because my money comes in dollars which is almost a tabu in these parts of the world. Basically, in people’s minds there are only three reasons why someone can earn dollars: 1) You are a gringo (local word used to talk about a foreigner); 2) You are a big shot business owner; or 3) You deal with drugs.

As you might be able to imagine I was crushed, all that time, effort, money and even blood was useless. I don’t think I need to tell you about how shitty my Christmas and new years holidays were. Then on January, once more all the photos start pouring in.

I didn’t know how to feel. I was of course so proud of my team but at the same time I was hating that I was once more just sitting at my computer while working looking at photos and not there with them. 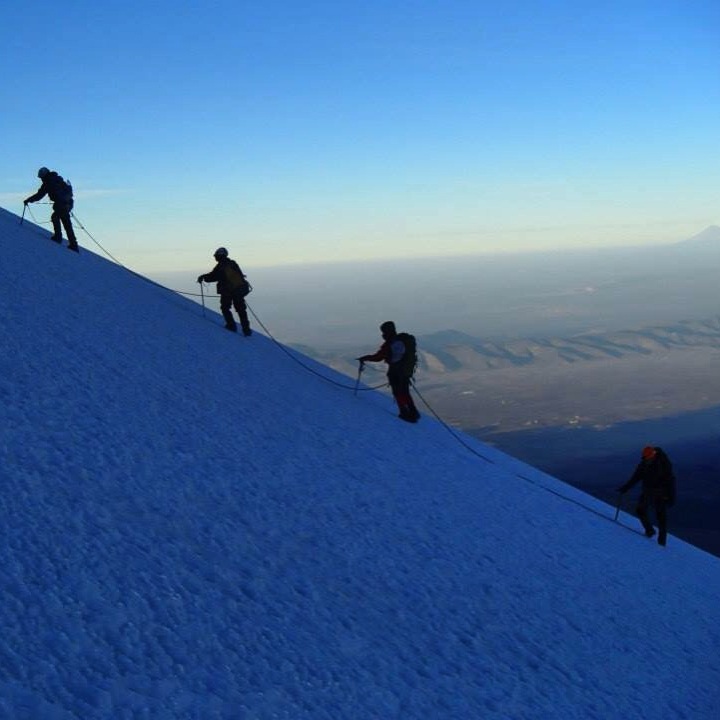 Photo of some of the team members who actually made it to Mexico ascending a glacier on Orizaba. So proud of them!

Once the anger and sadness were gone I decided that that lady was not going to stop me. I will go there and to mountains in South America and the ones in Europe. I am going to make it happen. I am going to go through that process again (I feel like my body isn’t as strong as it was by the time my mountaineering training ended). And whenever I get enough saving I’m moving on to the larges South American ones.

Just stick around for a couple more years and I’ll show you all of the amazing places I go to. For now, I’ll keep enjoying all of the fabulous mountains, volcanoes, forests an mountain ranges that my tiny country has to offer and I’ll tell you all about it. 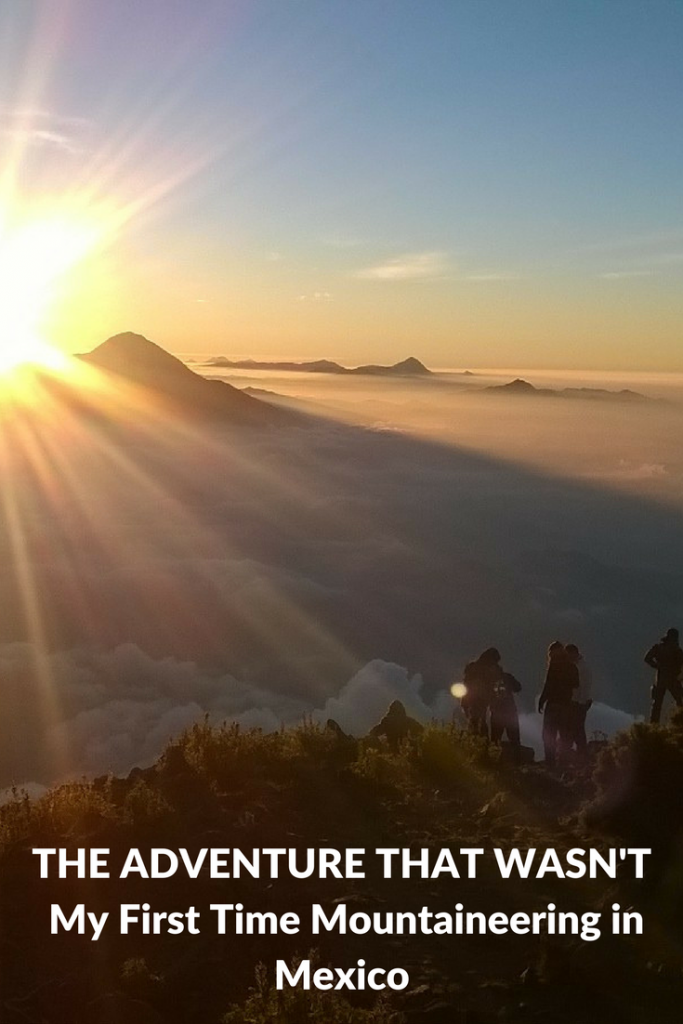 Hola! My name is Lourdes Díaz, I'm a 28 year old Guatemalan who is passionate about fitness, nature and adventure. More specifically trekking and mountaineering. I have been exploring all the corners of my country (and most of El Salvador) in the past two years. However, now I'm getting more ambitious. I'm planning to hike the globe while sharing my experiences and inspiring others to do the same Come and join me! Oh, and I'll also be a lawyer some day ;) Join Lourdes Díaz on Facebook and Twitter and Instagram
View all posts by Lourdes Diaz →
This entry was posted in Central America, Destinations, Guatemala Attractions, Things to Do in Guatemala and tagged camping, guatemala travel, hikking, mountaineering in mexico, trekking, volcanoes of guatemala. Bookmark the permalink.