If you’re feeling frivolous and wealthy enough, you have spare time on your hands and you love the game of golf – how about trying to take in all four Major tournaments next year?

To do this, of course, you have to love touring the United States – but that’s hardly a chore for most visitors to this vast nation. The facilities are excellent, the country is really a number of different cultures and countries in one and, of course, you’ll get great weather.

The other leg of the tour will take you to the British Isles at the height of summer, too – and there’s surely no more beautiful country on the planet in which to witness the great game of golf first-hand.

So without further ado – let’s have a look at next year’s Majors golf schedule – staring with the only one not yet won by the favourite for next year’s event Rory McIlroy and the Masters at Augusta. 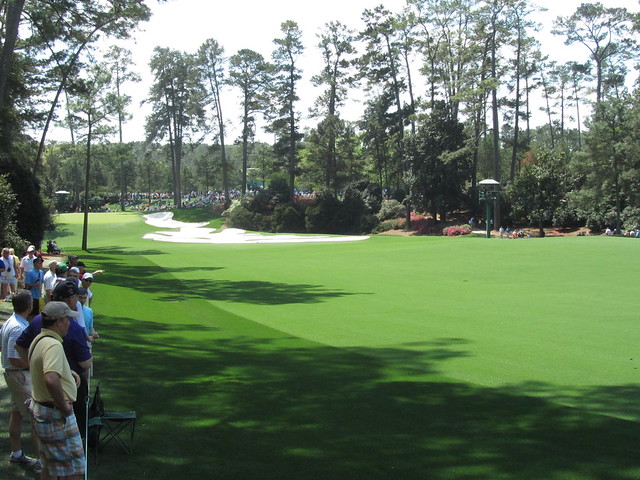 The Masters at Augusta

The Masters is unique in all the four Majors as it’s the only one to be played at the same venue each year – and what a venue this is for travellers whether or not you love your golf.

Now Augusta is a great venue for more than just the golf. First off – it’s roughly half way between Georgia’s state capital and largest city Atlanta and the Atlantic coast. And on that Atlantic coast are two wonderful cities well worth a visit at any time of year; Charleston, South Carolina and Savannah Georgia.

Both these cities are of huge cultural and architectural importance in the south-eastern United States – primarily because they weren’t razed to the ground during the US Civil War – unlike Atlanta which was. Atlanta is still interesting, of course, as anyone who remembers the 1996 Olympic Games will be able to testify. But if it’s good old southern charm, elegance, hospitality and a little faded glory you’re after – then head for the two cities on the coast. They will not let you down for their unique charm and beauty and wonderful colonial architecture.

Augusta itself is also a beautiful town and at the time of year the Masters is held – the whole area is probably at its absolute best. The 2015 Masters Golf Tournament will be held from April 6th to the 12th, 2015. At this time of year, Georgia is just beginning to heat up and the fresh spring days are simply wonderful to behold. The whole state is nowhere near reaching that oppressive sultriness for which it is famous later in the year but you can still enjoy some positively hot days on the beaches if you get lucky. You will almost certainly enjoy great weather at this time of year, though, and the Masters is usually played in great weather conditions.

If you can only manage one of the four Major golf tournaments, this is probably the best one to go for – for travellers from outside the USA.

These days, the Wednesday practice round is one of the most popular days on which to visit. On this day, you’re allowed to take cameras and cell-phones onto the famous Augusta course and snap away to your heart’s content. This is not the case during the actual tournament of course. The practice day is quite relaxed and friendly – and you can get closer to the play and the players than during the competition itself. Also, the players tend to interact with the spectators a lot more, allowing pictures and signing a few autographs. Then there’s a Par-3 Tournament that usually features great golfers from the past in the line-up. Also – make sure you catch the ”

Remember that visiting this tournament can be quite physically demanding. So be prepared to do a fair amount of walking around the course if you want to see your favourite golfers. Remember too that food and drinks are limited when you’re on the Augusta National course. You’ll be able to get the traditional Pimento sandwiches along with different canned drinks and beer – but that’s about it. If you’re looking for more than this, then it’s best to splash out and buy a Masters Hospitality pass. This will enable you to get a full service meal along with other facilities. There are various venues and hospitality packages by specialist providers operating in and around Augusta for the event.

In a wider context, if you’re able to make it a bigger trip and spend a few days either side of the Maters, then in addition to the coast, Atlanta, Savannah and Charleston and the Carolina low country – do pay a visit to Augusta’s Museum of History. Here, there’s a special exhibit devoted to previous Masters Golf champions. And, by the way, did you know that the greatest golfer of them all, Jack Nicklaus, the “Golden Bear” managed to win more Masters Tournaments than anyone else?

Nicklaus won an amazing six Masters tournaments from his first win in 1963 aged just 23 to his last in 1986 at the ripe old age of 46. This makes him the oldest player ever to have won the tournament and he’s clear of the all-time chasing pack by two wins. Equal second with four Masters wins apiece are the legendary Arnold Palmer and, of course, one Tiger Woods. So it’s still conceivable that Tiger could equal Jack Nicklaus’s record, but by next year’s Masters, Tiger will be 39 himself – no spring chicken for a top golfer these days. And he hasn’t managed to win any of the golf Majors since before his much-publicised marital troubles and his injuries – back in 2008 when he won the US Open.

As it stands, the favourite for the 2015 golf Masters with the exchange Betfair and with the various major bookmakers is Northern Ireland’s Rory McIlroy – almost 14 years Tiger’s junior at just 25.

The Masters is the only one of the four Majors that the young man from Northern Ireland hasn’t yet won. In 2014, McIlroy won both the Open Championship at Hoylake on the Wirral in England, and the US PGA – which he won for the second time (he won the same event back in 2012). If he can win at Augusta, he’ll join a very small group of golfers from the modern era who have managed to complete a career Grand Slam of all four Majors. This shortlist includes just four names; Jack Nicklaus and Tiger Woods who managed the feat three times over, the “Black Knight” Gary Player and Ben Hogan, and Gene Sarazen.

So all eyes will be on McIlroy next year at Augusta – though his best finish in the Masters so far came this year when he tied for eighth place, so he has a way to go to win it.

Anyway – if you feel like playing the sport in addition to watching it while you’re in Augusta, then don’t worry – because there are no fewer than ten great golf courses to visit in the vicinity. These include Persimmon Hill, the Houndslake Country Club, the River Golf Club, Cedar Creek, Cooper’s Creek and several more. In short – you’re spoiled for choice here.

Taking the Majors chronologically, the second one to go to is the 2015 U.S. Open which is scheduled to take place at Chambers Bay on June 15th – 21st.

Now if you’re looking for the most spectacular scenery of any course on this list – Chambers Bay in the Pacific North West is probably where it’s at.

This will be the first time the course has ever hosted a US Open and it promises to be spectacular if only for the huge rolling fairways perfectly suited for today’s power players. There are also towering sand dunes here with dauntingly undulating greens and some highly unpredictable wind conditions on tis stormy coastline. This will provide a wonderful backdrop to the second Major of the season – and if you can possibly make it here – then do so.

Chambers Bay is at University Place in Washington State right on Puget Sound to the southwest of Tacoma. The course is only seven years old and was designed to replicate the style of the Scottish links courses.

It goes without saying that it’s a great jumping off point to explore the majestic Washington State and surrounding Pacific Northwest if you’re feeling ambitious enough. And it’s also a beautiful time of year to see this area, which is what makes following the Majors tour schedule such a great opportunity if you can do it.

Next up, we head eastwards over the Atlantic Ocean to the country where it all began. The 2015 Open Championship which will be played at St Andrews from the 12th to the 19th of July next year – with tournament play commencing on Thursday the 16th.

Now to golf fans, St Andrews needs no introduction. In many ways, this is the true home of golf – it really is where it all began.

This is truly one of the prettiest corners of Britain and there are endless possibilities for things to see and do in addition to the town being home to the biggest golf complex in Europe. Bring your walking gear because there’s some of the finest walking with the best views you’ll find anywhere – all in the vicinity.

Last but not least, the fourth and final major of the season will be the 2015 PGA Championship to be held at the Whistling Straits course at Kohler, Wisconsin between the 10th and the 16th of August.

Now again – if you had top pick the ideal time of year to tour Wisconsin –August would surely be it – because this place gets pretty cold in the winter! This in turn, makes it beautiful and still fresh in the hottest month of the year. And make no mistake – Wisconsin is a breathtakingly beautiful state.

The PGA was last held here in 2010 when German golfer Martin Kaymer won the first of his two Majors to date (he also won this year’s US Open at the Pinehurst Resort in Pinehurst, North Carolina of course).

Wisconsin is particularly well-suited for camping at this time of year. Check out the official State tour guide to see what we mean.

Camping American style is less about tents and more about RVs of course – and there are plenty places in the State that you can hire these from. And it is the ideal way to see the State if you can organise it.

The Whistling Straits course is situated in the eastern central part of the State along the border with Lake Michigan – and it is simply stunning. This is a vacation hotspot for Americans at this time of year and has a real coastal flavour. European visitors will think they’re at the seaside – which they kind of are.

The area comes with beautiful windswept sandy beaches, towering lighthouses, and an overall nautical feel – complete with its own fishing industry. And around the shoreline which surrounds the 137,000-acre Lake Winnebago (the State’s biggest inland lake) you’ll find more “coastal” villages and friendly communities which will make you want to settle down and live here forever. And as it’s the last Major of the season – you may as well stick around for a few more weeks if you possibly can. But if you don’t like the cold weather – just make sure you’ve packed up the Winnebago and headed south by the middle of autumn.

Then – well, it’s time to start planning the trip to Augusta all over again!